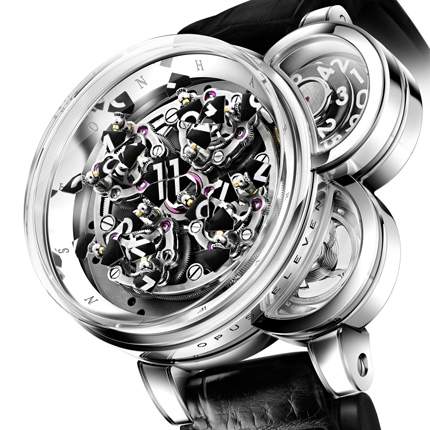 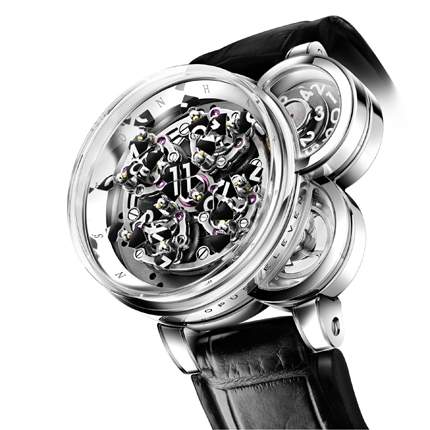 Brought to life in the hands of Denis Giguet, Opus Eleven makes news with a technology and architecture that have never been seen before. Ingenious mechanisms give the watch a rare character – an explosive temperament that makes a sport of time. In addition to its role as an instrument, Opus Eleven creates an engineering puzzle that resolves itself on the hour.

An extremely complex case stages the show. The three overlapping cylinders on three levels are configured to deconstruct time. The main circle is the hour's domain, flanked by two pavilions. One shows the minutes on a jumping disk for the tens and a running disk for the units. The other, slightly lower, displays the regular beat of a big titanium balance-wheel.

Anarchy takes hold of the hours indication beneath the sapphire-crystal dome every 60 minutes. The numeral of the hour, assembled in the center of the circle, explodes into chaos before instantly reassembling as the new hour. It then remains still until the next disintegration. Instead of a hand, 24 placards revolve and rotate on a complicated system of gears mounted on an epicycloidal gear-train. Four satellites mounted on a rotating platform, each with three pairs of placards, provide a vertical transmission through a train of eight intermediate wheels, three elliptical gears, a triangular wheel and six conical pinions. The bevel gears are responsible for changing the axis of rotation of the placards and positioning them according to an elaborate drill maneuver. The triangular wheel and elliptic gears are calculated to vary the gear ratio to absorb shocks and prevent the placards colliding.

The tooth profiles of the triangular and elliptical gearing have been obtained using sophisticated programs. These are today so powerful that they can calculate and display unconventional, and even extreme, gearing and analyze different parameters such as backlash. Parts are manufactured using photolithography, which produces micro-components to a precision unobtainable by traditional machining methods.

The conical pinions for the bevel gears are just 1.2mm wide, yet their teeth are exactly profiled and angled, thanks to a new gear-cutting technique.

The path taken by the placards has been calculated to minimize the space required for them to turn over. However, the shell of sapphire crystal, also extremely difficult to manufacture, gives ample room for the hourly animation.

The transparent display back of the gold case reveals a manually wound movement in the style of the old pocket-watch movements with a big balance-wheel. Consisting of 566 components, including 155 jewels, the mechanism is finished in the most traditional manner of classic watchmaking, in sharp contrast to the crazy display of the hour. One version of the watch is gem-set in the contemporary style: a simple line of princess-cut diamonds lights up the contour of the caseband.

The appointment has been fixed. The hour comes apart at its end, leaving its particles to explode outwards and be turned into new hours ad infinitum. Such complexity and ingenuity make Opus Eleven an important milestone in Harry Winston's exploration of time.