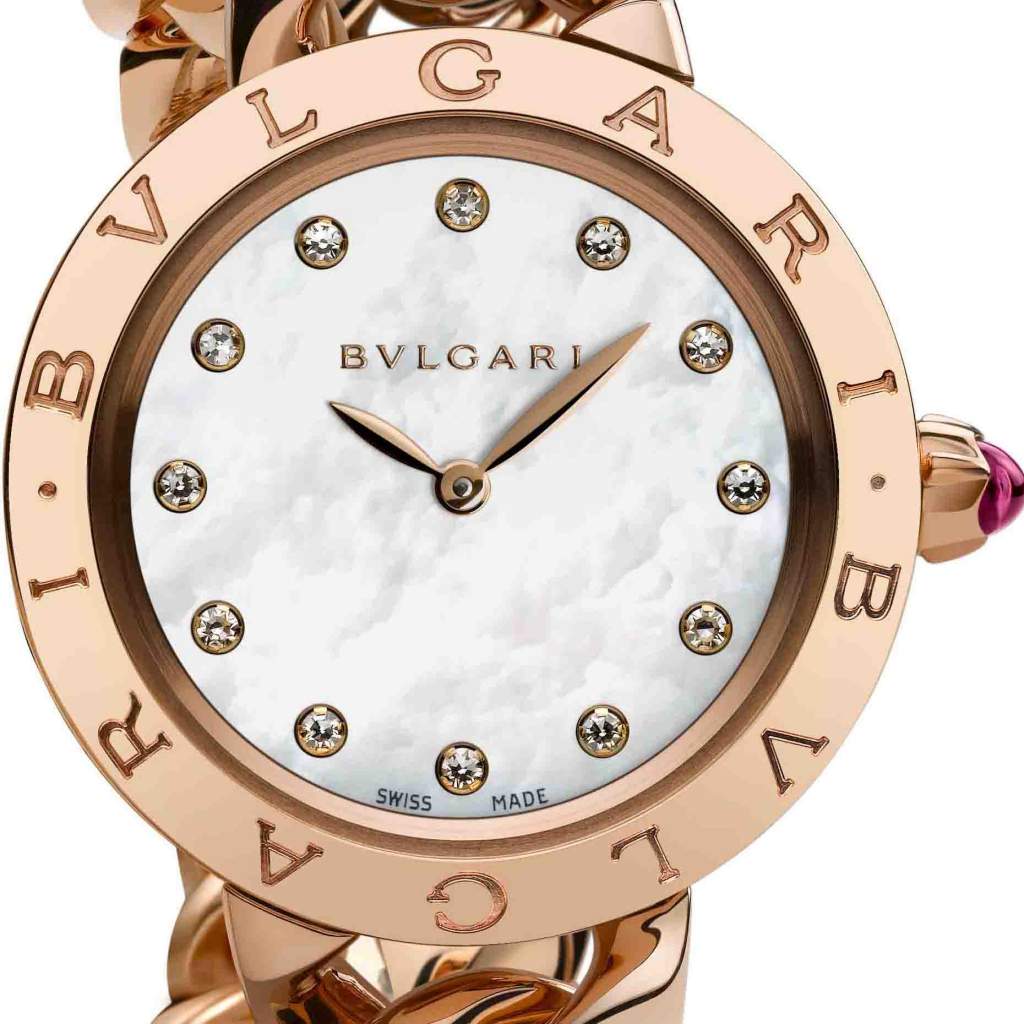 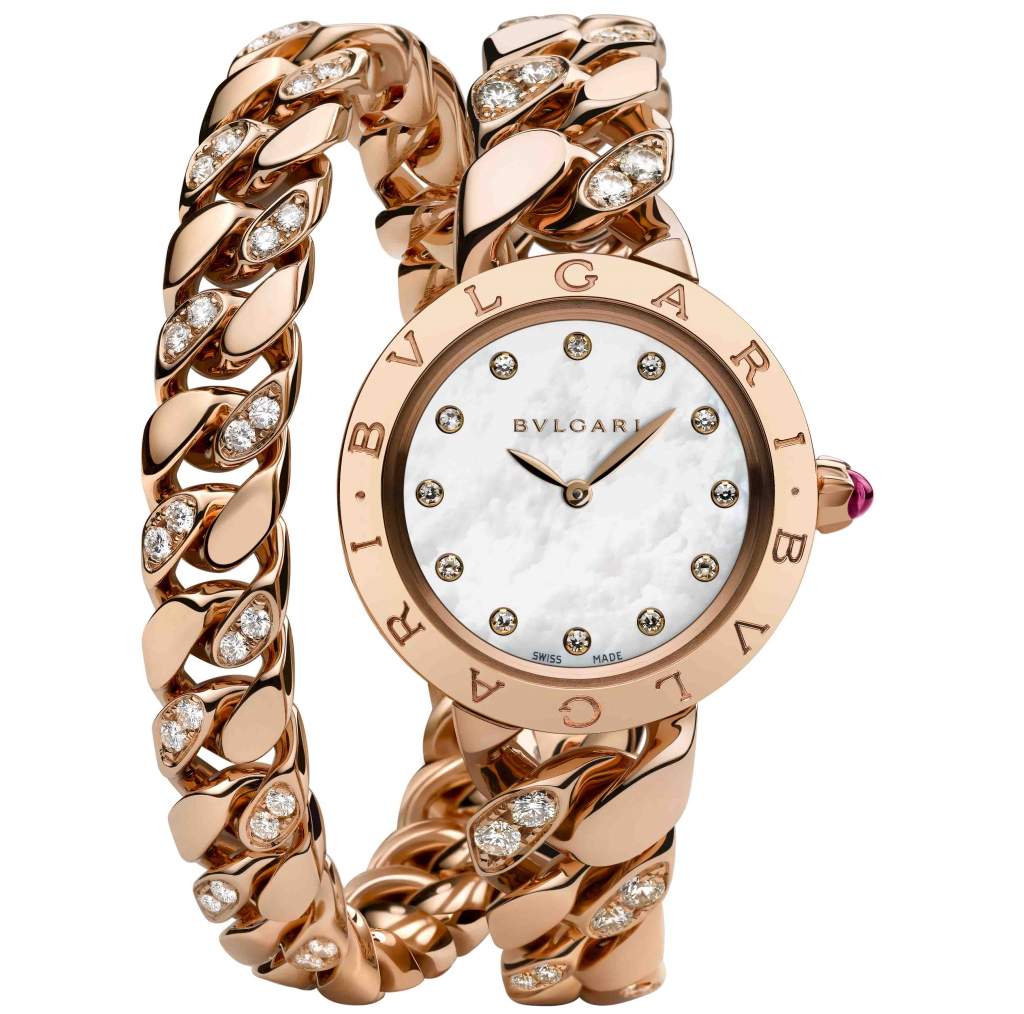 Simplicity, tradition and elegance intertwine in this precious creation by Bulgari. Approximately 14og of pink gold links form a beautifully subtle extension of the 18k gold case which bears not just the double BVLGARI logo on its bezel, but also a mother of pearl dial featuring 12 brilliant cut 0.133 carat diamonds and a rubelite cabochon accenting the ridged crown. This sophisticated timepiece is inspired by the historically classic gourmette. The gourmette, the French name for the vintage “name-plate bracelet,” has been reinterpreted by Bulgari and restored to its former familiarity. Known to grace the wrists of contemporary goddesses such as Elizabeth Taylor, Anna Magnani and Grace Kelly, the gourmette is enhanced with timeliness to become the BVLGARI BVLGARI Catene of today. Such an eternally sentimental symbol is now customized as a wrap-around bracelet watch, and a suppleness attributed directly to its sophisticated construction. The apparent simplicity of the timepiece’s smooth elegance betrays its complex construction: the supreme savoir-faire of Bulgari goldsmithing creates a bracelet to twice encircle the wrist with a comfortably lithe embrace. As it oft does, Bulgari has taken inspiration from history, and the vintage nature of such a classically playful decoration: Bulgari reasserts itself once again as a House of inspired creativity.

BVLGARI BVLGARI Catene also comes in a semi- pavé version in which the various elements of 18k pink gold bracelet are alternately set with a total of 60 brilliant cut diamonds (2.50 cts). In both versions, the bracelet is secured by an 18k pink gold triple folding clasp.

The motif of the chain is one of the oldest in jewellery dating back to the ancient Sumerians who, as early as 2500 AD, were able to work gold into thin sheets woven together with the ‘loop-in-loop’ technique. Among the ancient Greeks, in the lands where Bulgari’s deepest roots lie, necklaces in the form of a chain were much in vogue. Made of interwoven sprigs of rose and myrtle, these were meant to imitate Venus’ legendary girdle that gave her the power to exercise an irresistible attraction over anyone. Among the Romans, the chain incorporated a gold medallion or coin as a pendant, while in Byzantium, chains of gold and gems were widely worn.

At the time of Alexander the Great, the gold mines of Thrace and treasure looted from the Persians were great sources of inspiration for the workshops of goldsmiths, the chain necklace becoming one of the principal marks of wealth and distinction. During the Renaissance, the chain necklace took on the dual function of ornament and object of exchange value: every link was worth as much as the legal tender, and could therefore be used instead of money. In a famous painting, Henry VIII is portrayed wearing a chain weighing three kilos, studded with pearls and rubies. Like him, men and women posed for painters like Cranach or Dürer adorned with multiple gold chains, different in their length and the form of their links, in order to show their high social status. Precious chains remained a prominent form of jewellery for centuries up until the French Revolution, which put a check on their production owing to the new austerity. After the Revolution, chains returned to style in the shape of long sautoirs or rope necklaces with medallions decorated in enamel. Later, in the 18th and 19th centuries, the elegant muff chains with which fur muffs were hung around the neck and the ones used to attach pocket watches to clothing became further examples of how versatile chains were in combining aesthetic effect with practical functions.

THE JEWELLED CHAINS OF BULGARI

Around the mid-1960s, Nicola Bulgari began reinterpreting the tradition of chains by inserting antique coins, cameos and intaglios into them: an open reference to the Greek roots of the Bulgari family which were in turn grafted in Rome. The resulting pieces immediately won the acclaim of the city’s beau monde. Gourmette chains with curved and smooth links, their clean lines inspired by the chainmail of medieval armour, became a new Bulgari favourite for its unusual mix of traditional motifs and innovative craftsmanship. Exquisitely styled, unexpectedly lightweight and painstakingly worked by hand in the Bulgari ateliers, the supple chains had an easy wearability that lent themselves to the most fanciful interpretations, whether in the echo of ancient coins in the modern lines or in the combination with splendid cabochon gems. Among the admirers of Bulgari’s coined chains, Elizabeth Taylor ranked in her own special universe. The legendary actress’s fabulous collection of Bulgari jewels included two necklaces with pendants of imperial Rome and a splendid sautoir mounted with six Byzantine coins which she wore on the occasion of the announcement of her engagement to the politician John Warner. Italian actress Anna Magnani nonchalantly piled all six of her Bulgari curb link chain bracelets on one wrist. Similarly, a gourmette chain in yellow gold adorned with a bronze coin dating back to the third century AD was among the most favored pieces of Andy Warhol who used to say that “calling at Bulgari’s store in via Condotti is the best exhibition of contemporary art”, a sentiment that, incidentally, remains true to this day.