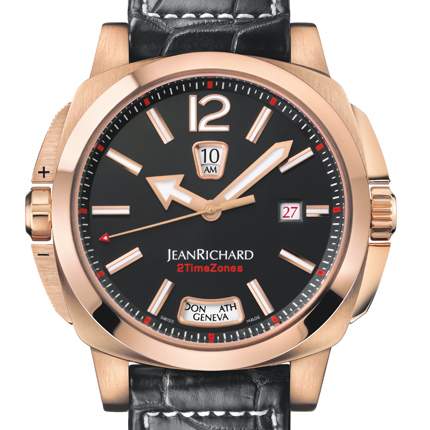 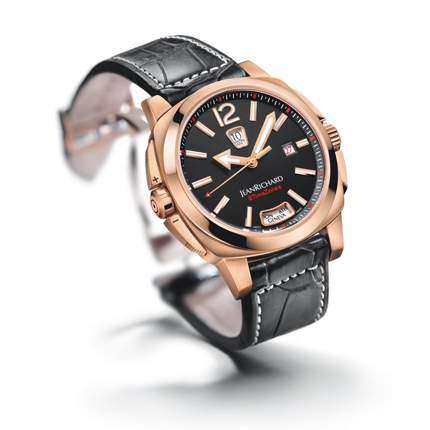 A further incentive to travel with the latest 2TIMEZONES

JEANRICHARD's 2TimeZones heart beats with the brands' latest in house developed module, fitted on the now well established JR1000 in house manufactured movement; the JR1060, a self-winding mechanical movement, includes a GMT complication. Intended for travellers and people who cultivate contacts around the world, the 2TimeZones offers a clear and innovative display of the second time zone. The first one indicates local time, which is featured in the traditional way with central hours, minutes and seconds hands. Meanwhile, an aperture at 12 o'clock displays the time in the second time zone, with an AM/PM indication, avoiding any confusion and optimising the reading of the one to twelve numbers. A second aperture, at 6 o'clock, shows one of the 24 reference cities for the various time zones.

Two crowns at 3 and 9 o'clock emphasize the originality of this model. The first one, a screw-locked crown at 3 o'clock, serves to wind the watch up, correct the date and set the time. The city indication is modified by using the second crown at 9 o'clock. An especially dedicated mechanism has been developed to allow rapid adjustment of the hour hand separately from the movement as a whole, simply by pressing the two pushers along the left-hand side of the case. By pressing the + or – pusher, the watch owner can move the hour hand forwards or backwards, independently from the minutes, and enables rapid adjustment of the local time without removing the watch from his wrist!

The design of the 2TimeZones' case - a shaped round fitting inside a square – is for sure unusual. JEANRICHARD updated its shape in the 1980's from the original design going back to the 1960s. This third 2TimeZones version is an elegant piece in 18 carat pink gold, targeting a more classic clientele than that of the sporty steel, steel /rubber versions, with a silvered or black satin sunburst effect dial for greater sobriety and optimum reading of the time.