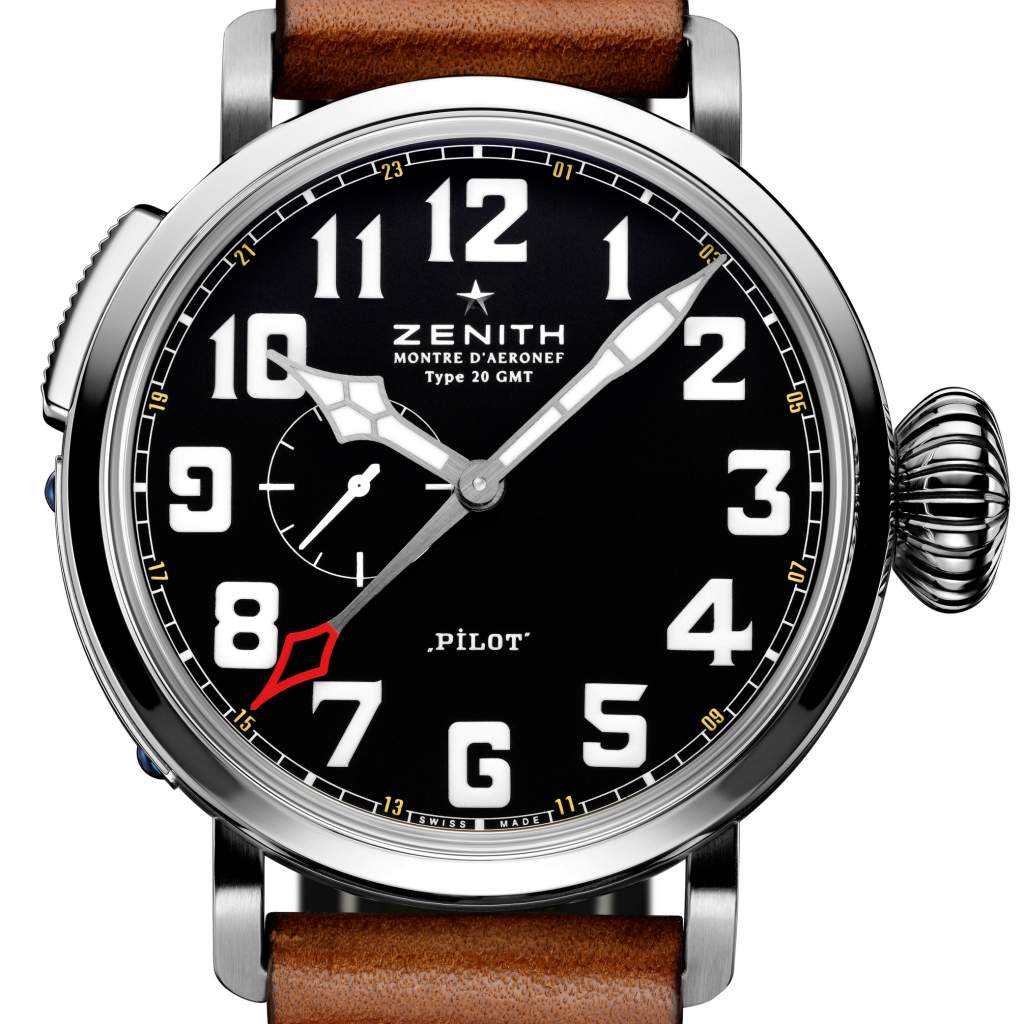 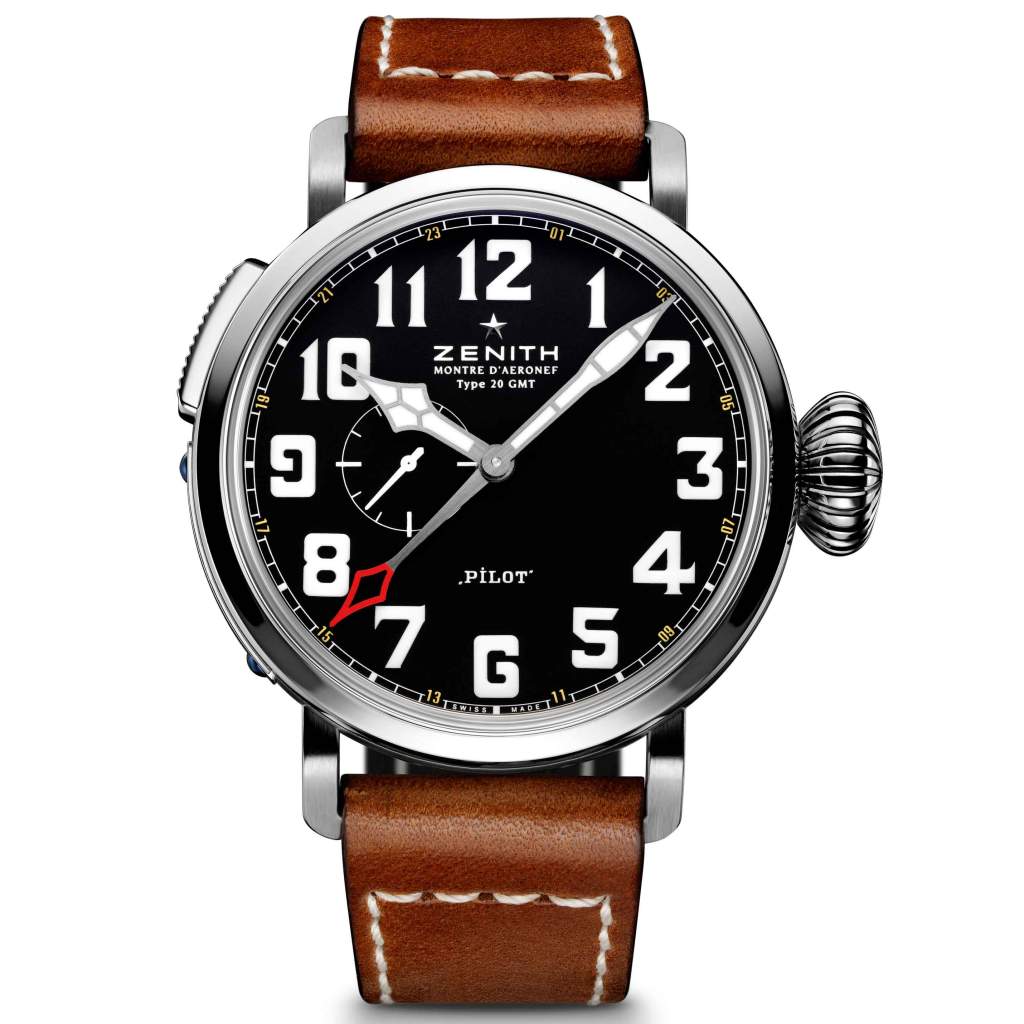 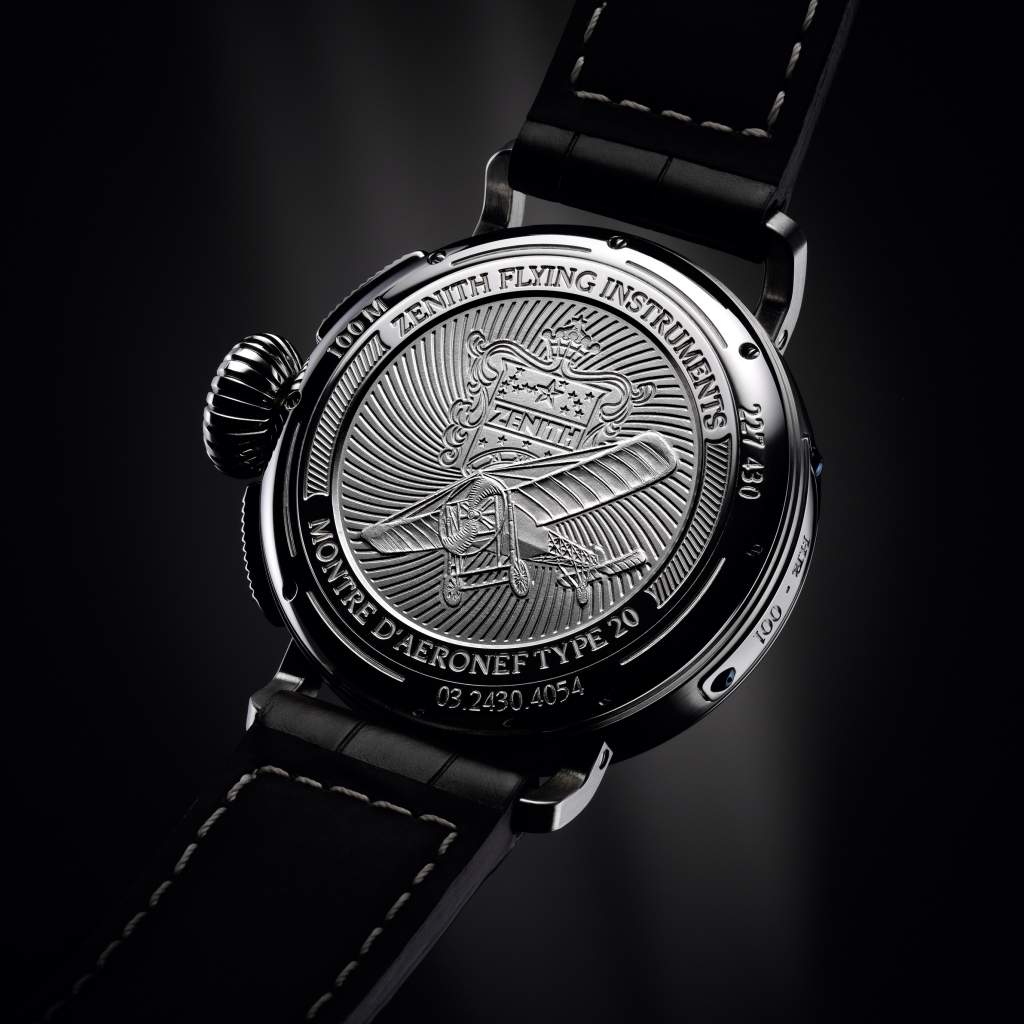 The Manufacture Zenith, which has remained in the very same spot for almost a century and half, was an integral part of the early days in the amazing saga of aviation and was one of the first to supply onboard watches and instruments.
Six new Pilot Montre d’Aéronef Type 20 watches, including a special series paying tribute to the Red Baron, echo the fundamental role played by Zenith in the conquest of the skies..

Louis Blériot and Léon Morane were acquainted with each other. The two famous pioneering aviators took part in the conquest of the skies in the early 20th century. On July 25th 1909, at the age of 37, Blériot flew across the Channel in a plane he had built: a world-first accomplishment. Less than a year later, 25 year-old Morane flew at more than 100 km/h at an air show in Reins, France – an unbelievable speed for the time. His aircraft was a Blériot XI. The two men shared a passion for aviation as well as a taste for risks – and of course for competition. Not only that, but Louis Blériot and Léon Morane also owned an instrument that was a must-have for pilots, a Zenith watch that they regarded as the most accurate on the market. Witness these few lines penned by each: “I am very satisfied with my Zenith watch that I generally use and I cannot but recommend it to all those with a concern for precision”, wrote Louis Blériot, while Léon Morane exclaimed “Zenith! Isn’t that a predestined name for aviators? Add to that the fact that all these qualities are housed within the attractive case of this watch, and you’ve got a Zenith.”
Zenith thus made a decisive early entrance into the extraordinary adventure of aviation. First partnering some of the greatest pioneers, the Manufacture subsequently became one of the first onboard instrument manufacturers. Altimeters and onboard watches (montres d’aéronef) intended for inflight use were supplied both to the military and to civilian airlines. Known among aeronautical industry manufacturers and professionals for its reliability, its sturdiness and its precision, the famous Zenith Type 20 appeared as of 1938 on the instrument panels of a number of planes – including the Caudron Simon C.635 used by the French Air Force as a training aircraft. Today’s Pilot collection is a worthy heir to these years of airborne glory and conquests.

Early 20th century aviator wristwatch that belonged to Louis Blériot. The impressive grooved crown is typical of aviator watches of the day, as are the luminous hands and numerals.

PILOT MONTRE D’AÉRONEF TYPE 20 GMT
The French term “montre d’aéronef” (onboard watch) is an apt name for these instruments specially developed for aviation, a field in which the conditions of use were considerably more demanding than elsewhere and severely tested the mechanisms. The latter had to withstand sudden fluctuations in temperature, magnetic fields given off by the engines and the other flight instruments, occasionally violent vibrations, humidity, as well as changes in atmospheric pressure. Impeccable readability was also a must, and a large matt black dial provided the best possible contrast for the white luminescent-coated hands and other time indications. The latter featured characteristic Arabic numerals and an oversized font. As far as wristwatches were concerned, operating them was considerably facilitated by a distinctive crown enabling gloved handling of the winding and setting functions.
All these requirements were part of the technical specifications developed in the mid-1930s and which have evolved over the years in step with aviation technology. As of 1938, the specifications became known as “Type 20”. These professional watches regarded as survival instruments were regularly checked and maintained. In France, for example, they were supplied to the Air Force, the Naval Aviation and the Test Flight Centre. Today, the Type 20-approved instruments produced at the time by only a handful of stringently selected manufacturers belong to the flight instrument hall of fame.
The new Pilot Montre d’Aéronef Type 20 GMT is a worthy successor to the first Zenith aviator’s watches. This generously 48 mm-diameter model echoes all the same distinctive visual features: a wide grooved and screw-locked crown, imposing Arabic numerals entirely made of white Superluminova displaying the time, as well as a large matt black dial – forming a backdrop against which the finely satin-brushed ruthenium black, Superluminova-enhanced hands stand out clearly and visibily. The solid caseback is composed of a medallion struck with the effigy of a Blériot plane and bearing the inscription: “Montre d’Aéronef Type 2 – ZENITH Flying Instruments”. In a nod to the Swiss civil aviation registration system, the letters HB appear on the side of the case, followed by a figure referring to the model’s series number.
Powered by an automatic Zenith Elite 693 movement with a 50-hour power reserve, this steel model with a brown leather strap drives the hours, minutes, small seconds at 9 o’clock and GMT functions. While modern-day travellers smoothly juggle time zones on their wrist, this was not always the case. It was in the 1820s that the decision was taken to adopt a universal time unit based on a solar day comprising 86,400 seconds. In 1833, the United States became the first nation to establish a time-zone system, and it was not until 1844, at the close of the fiercely contested International Meridian Conference in Washington, that the globe was officially divided into 24 time zones and the location of Greenwich, England was adopted as the zero meridian. This would become the universally recognised Greenwich Mean Time or GMT, the sole international time reference for pilots the world over.

PILOT MONTRE D’AÉRONEF TYPE 20 GMT RED BARON
GMT watches are thus direct heirs to the conquest of the skies, which is why Zenith wished to pay homage through a special GMT series to one of the most talented pilots of his era, who became a legend: the Red Baron. Born Albrecht von Richthofen in May 1892 in what is now Poland, he was fascinated by the budding field of aviation and soon became a true aerobatics artist – a flying ace to whom even pilots of the allied forces paid tribute. His celebrity and his nickname are inseparably bound up with that of the bright red-painted Fokker Triplane Dr.1. Famed for his 80 air combat victories, he was one of the last representatives of the nobler values of such combat: honour, fair play and courage.
It is in memory of this gifted pilot whose name is still cited to this day that Zenith has created a 500-piece limited edition: the Pilot Montre d’Aéronef Type 20 GMT Red Baron. Made in black DLC-coated steel and fitted with an overstitched black leather strap, this model is also distinguished by its red GMT marking and by the caseback medallion depicting the Fokker Triplane Dr.1 and bearing the inscription: Montre d’Aéronef Type 20 – ZENITH Flying Instruments. Definitely a collector’s watch.

ANNUAL CALENDAR AND TOURBILLON IN THE SPOTLIGHT
Three other new models round out the exceptional 2013 Pilot range. The first, the Pilot Montre d’Aéronef Type 20 Annual Calendar, is equipped with a high-precision El Primero 4054 B movement, an evolution of the famous El Primero chronograph (36,000 vibrations per hour) produced in-house by the Manufacture for over 40 years. In addition to the hours, minutes, small seconds and a chronograph with 60-minute counter at 6 o’clock, this model also displays an annual calendar – showing the date, day of the week and month – that requires just one adjustment per year in the transition from February to March. This cleverly conceived and aesthetically restrained complication comprises just nine moving parts, whereas most calendars require 30 or 40. This timepiece is available in a steel or two-tone titanium and rose gold version. In a nod to the Swiss civil aviation registration system, the letters HB appear on the side of the case, followed by a figure referring to the model’s series number.
The Pilot Montre d’Aéronef Type 20 Tourbillon also makes a noteworthy appearance in the collection. This titanium and rose gold tourbillon model features a rotating carriage in the upper left-hand part of the dial, as well as incorporating a date indication. This asymmetrical aesthetic serves to highlight the tourbillon mechanism that is visible through the dial opening, while preserving the slender proportions and elegant lines of this watch. The date driven by a patented system is displayed by means of a disc surrounding the carriage. This model is powered by the automatic El Primero 4035 D chronograph calibre, while the side of the case bears the letters HB followed by a figure referring to the watch’s series number.
Finally, the Pilot Montre d’Aéronef Type 20 model combines the magic of a history-filled timepiece with a more classic 40 mm size. This unisex model carries all the pilot’s watch signature codes – hours, minutes and small seconds at 9 o’clock – framed by a steel case bearing on its side the HB letters typical of Swiss aviation registration systems, followed by a figure referring to the model’s series number.