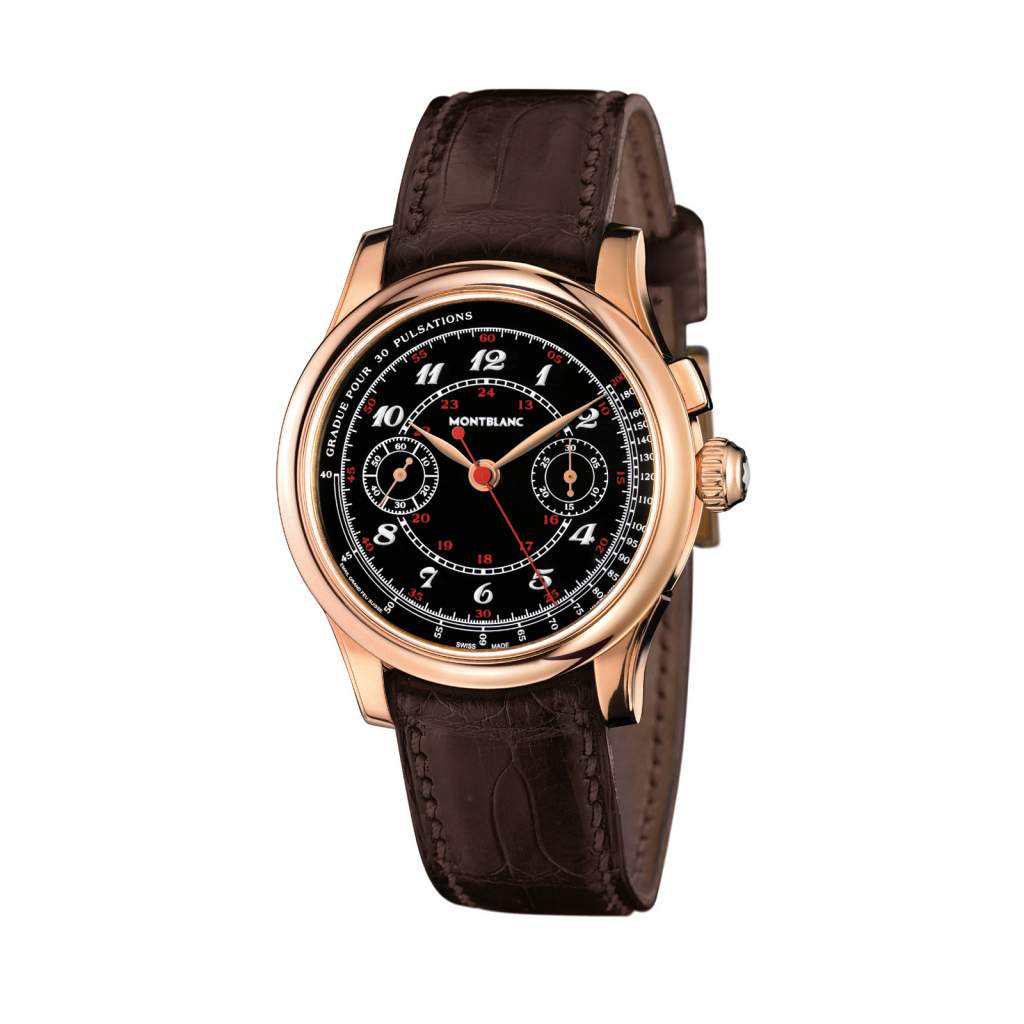 Functions
Hours, Minutes, Seconds, Chronograph
Reference
106497
Year
2011
Collection
Montblanc Collection Villeret 1858 / 58-pieces limited series
Price excl.VAT
41'600 CHF
Description
One feels as though one has been magically transported back to the 1930s, when one holds the new Vintage Pulsographe from the Montblanc Collection Villeret 1858 in one's hands, when wristwatch chronographs were used in many professions and activities as practical measurers of short intervals. The archive of the manufacture in Villeret preserves the memory of that era in the form of enamel dials marked with specially calibrated scales for particular types of time measurement. Recalling this grand era, the enamel dial of the new Vintage Pulsographe bears a pulse scale, a special feature which was particularly popular among physicians.

An unusual aspect of the new chronograph from Villeret is the diameter of its case: 39,5 mm. This size is inspired by the chronographs of the 1930s, and is intended to appeal real Vintage aficionados who have a growing interest in chronographs from this petite yet elite manufacture, where timepieces are still primarily handmade with the best Swiss watchmaking tradition.

A Movement in the Best Swiss Watchmaking Tradition
Though its diameter is merely 29.5 mm (13 lines), chronograph calibre MB M13.21 boasts all the attributes of classical chronograph mechanisms and traditional manufacture craftsmanship, e.g. column-wheel control and horizontal wheel coupling. As a monopusher construction, this movement relies on a three-phase control: the chronograph function starts the first time the button is pressed; the chronograph's hands stop the next time it is pressed; and these hands return to their zero positions the third time it is pressed. The sequence begins anew the next time the button is activated.

Genuine Grand Feu Enamel Dial
The dial, like all watch faces in the Montblanc Collection Villeret 1858 is made from solid gold. Its grand feu enamel coating, contrasts perfectly with the numerals and scales. The outermost edge of the Vintage Pulsographe's dial is marked with a red pulse scale and the phrase “GRADUÉ POUR 30 PULSATIONS” (i.e. “calibrated for 30 pulse beats”). Further inward, this scale is followed by the minutes and elapsed-seconds scale (the latter with fifth-of-a-second subdivisions), then by the hour-circle with large Arabic numerals, and finally by a railroad-style scale marked with the hours from 13 to 24. A subdial at the “9 o'clock” position indicates the continually running seconds. Another subdial at the “3” can tally a maximum of thirty elapsed minutes.

The Pulsograph
Eighty years ago, especially physicians numbered among the first users of wristwatch chronographs, to measure patients' pulse rates without having to continue feeling the pulse for a full minute. They could start the timepiece's chronograph function the moment they began to palpate the patient's pulse. If the pulsographe scale was calibrated for thirty pulse beats, they would continue counting the throbs until they had felt the thirtieth pulsation, whereupon they would stop the chronograph: the tip of the designated hand would indicate the point along the pulse scale corresponding to the patient's pulse rate per minute.
Wristwatches with pulsograph scales soon earned fame as so-called “doctor's watches.”
A Genuine Golden Treasure
The complex chronograph movement and artistically crafted dial of the new Vintage 39,5mm are ensconced inside a case made of 18 carat white or red gold. Its flank bears a winding-crown adorned with the Montblanc emblem in mother-of-pearl and the chronograph's sole push-piece at the “2 o'clock” position. A pane of sapphire crystal in the back offers an unobstructed view of the artistically decorated movement with its large balance and classical chronograph mechanism. This case is affixed to a hand-sewn alligator-leather strap with large reptilian scales. In accord with tradition, the wristband is opened and closed with a pronged buckle made of solid gold.
Only fifty-eight pieces of each model in red and white gold will be produced: this number refers to the year 1858 when the Minerva manufacture was first established.
© Fondation du Grand Prix d'Horlogerie de Genève