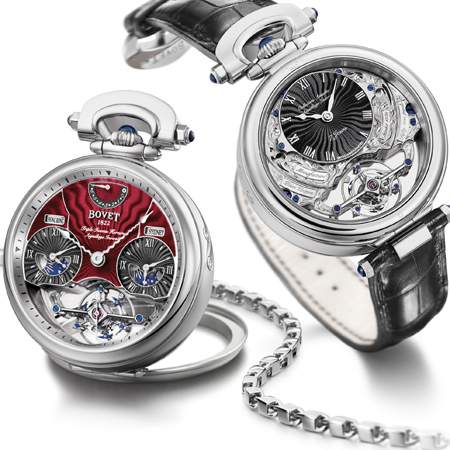 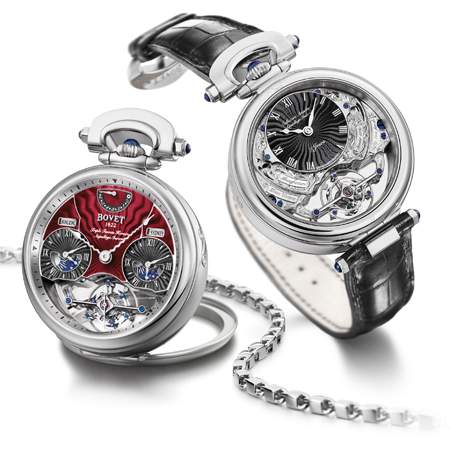 The House of BOVET this year celebrates its 190th anniversary and to mark the occasion offers a wealth of new timepieces to its collectors. Among their number, the timepiece poetically named Rising Star stands out clearly as the new jewel in the crown of the “Grand Complications” collection. As was to be expected, this veritable work of art originates wholly in the workshops of DIMIER 1738, Manufacture de Haute Horlogerie Artisanale. It offers for our delectation an entirely redesigned tourbillon movement. The latter without doubt attains a level of breathtaking quality.

The tourbillon carriage has been extended to a diameter of 13.50mm. The carriage now appears to be suspended in mid-air, accentuating its aesthetic affinity with the historic design of timepieces dating from the 19th century.

The rest of the movement makes use of the surface provided by two three-quarter plates, between which DIMIER 1738 watchmakers have succeeded in integrating a plethora of highly useful mechanisms and indications. In an additional tour de force, all indications are arranged in a consummate harmony of balance and symmetry. The horizontal axis of the main guilloché dial shows three time-zones. The two secondary time-zones are located at 9 o'clock and 3 o'clock and are supplemented respectively by the invaluable indication of one of twenty-four cities corresponding to the time-zone displayed, added to which are two day/night indicators. The vertical axis also shows the hours and minutes of the local time-zone (in the centre) a power reserve at 12 o'clock and the seconds-hand carried by the upper pivot of the tourbillon carriage at 6 o'clock.

This catalogue of wonders would surely have stopped there had not Pascal Raffy, the owner of BOVET FLEURIER and of DIMIER 1738, introduced in 2010 throughout the entire Fleurier collection the AMADEO® system, which allows the timepiece to be converted simply into a miniature table clock, a pocket watch or a reversible wristwatch without the need for tools of any kind to carry out the “operation”. What use would the latter function be if no indication appeared on the underside of this timepiece? Pascal Raffy and his teams made a point of addressing this question by adding a reversed hand-fitting to the back of the timepiece, providing an indication of local time on a dial offset at 12 o'clock which carries the hands of this timepiece- numbering ten no less – without in any way compromising the legibility of the indications!

The tourbillon carriage alone contains many examples of the meticulous care devoted to every detail, often inspired by timepieces found in the historic collections of the House of BOVET. Steel components adopt the emblematic form of period index assemblies. Bevellers have spared no effort in this succession of re-entering angles, rounded off to create a dazzling black polish with clean, bright edges.

The rim of the balance also evokes its glorious ancestors. Its delicate profiles echo the shape of dynamic weights found in the balances of timepieces manufactured by Edouard Bovet in the 19th century. Since these weights are manufactured in blued steel, it is perfectly natural that the balance of this Rising Star should also be resplendent in royal blue.

BOVET's Rising Star is produced in a limited edition of produced in a limited edition of 190 pieces, completed by 9 pairs of unique pieces whose dials on the movement side are decorated with miniature paintings reprising the themes of enamels displayed on historic timepieces from the 19th century found in the private collections of the House of BOVET.

With this 2012 vintage, BOVET consolidates its place as a leader in the ultimate expression of watchmaking arts.