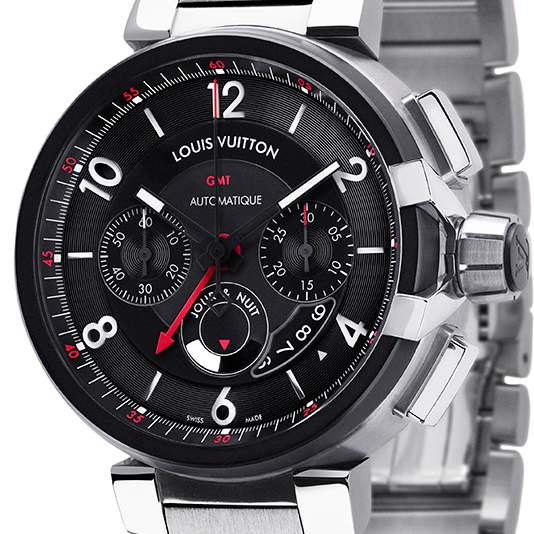 With its distinguished character, the Tambour eVolution opens an unprecedented chapter in Louis Vuitton’s watchmaking story. A new masculine interpretation of the Tambour, this timepiece with taut lines and a high-tech silhouette – encased using the innovative material “Black MMC”. The Tambour eVolution is a strong aesthetical departure from the classic tambour, rewriting the codes of Louis Vuitton’s iconic watch.

Designed for the modern, urban, globetrotting man, the Tambour eVolution is the definitive evocation of everyday performance. Available in a GMT three-hand version and a GMT chronograph, in steel or pink gold, with a day/night indicator, the Tambour eVolution displays its modern sensibilities entirely in line with Louis Vuitton’s watchmaking traditions, which have always combined a sense of elegance, a passion for travel and a quest for precision.

Design: a new page in an on-going story
More than a change, an evolution. Since its creation in 2002, the Tambour watch has been distinguished by its uniquely shaped case, eight-sided crown and side engraving with the twelve letters of Louis Vuitton. The Tambour eVolution is ushering in a new era of confident modernity. Its lines are edgy, less rounded and highly masculine.

The eight-sided crown has made way for an ergonomic screw crown with nine grooves for enhanced grip. Featuring a Black MMC flat-edged insert with the Monogram logo, this new crown is flanked by a large “V” on the edge of the case, as if Louis Vuitton’s twelve engraved letters had taken flight and merged into a single concentrated letter.
Restrained and competitive, the Tambour eVolution draws on the energy of its dual-material assembly: a steel case and Black MMC bezel or a Black MMC case and pink gold bezel. The highly architectural design offers a rarely equalled feeling of power and technical expertise. Its imposing diameter, 43mm for the GMT three-hand version and 45mm for the GMT chronograph version, underscores this strong identity. This beautiful presence is paired with perfect ergonomics when worn.

The change can also be seen on the dial, in black color. The GMT’s deep red arrow-shaped hand indicating the time in the second time zone adds a bold, instantly visible and energising touch; as does the circular day/night indicator positioned at six o’clock and the wide date window at three o’clock. Another new feature that highlights its personality: the Tambour eVolution is the first watch from Louis Vuitton created solely with a metal strap.