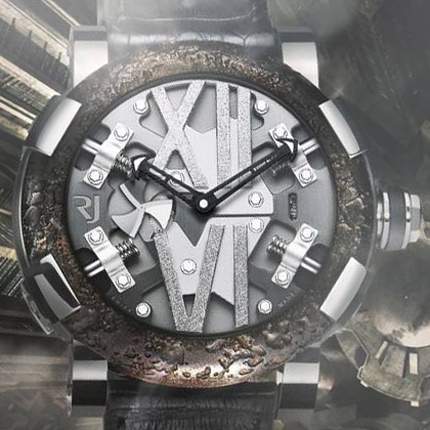 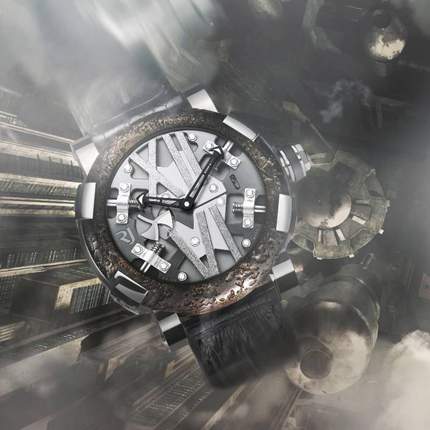 Galvanised by the ever-growing Titanic DNA shock wave, RJ-Romain Jerome has decided to enrich its collection with an explosive timepiece named Steampunk. The new Steampunk model is born of a high-tension creative impulse and catalyses all the attributes of a devastating personality. Expressed through polished steel paws, pistons and Roman numerals, design becomes a powerful weapon of conviction in this no-holdsbarred model.

The entirely dial-free Steampunk is housed within a 50 mm-diameter case providing unobstructed views of the sturdy, rigorously constructed mechanism that naturally commands respect and is held in place by four screwed-down pistons symbolising the RJ's signature "X" motif.

Imbued with the Steampunk inspiration, the Roman XII and VI numerals are left "raw" and coloured according to the model. These vigorous aesthetic codes energise the upper bridge satin-brushed or circular-grained, depending on the model, by the watchmaking craftsmen at RJ-Romain Jerome. Faithfully reflecting the inimitable Titanic-DNA style, the small seconds is distinguished by its stand-out propeller shape.

The Steampunk features an impressive ability to integrate and optimise the signature features of the DNA collection. With a bezel in stabilised oxidised steel1 secured by four polished steel claws2, the Steampunk both appeals and reassures.

At the helm of RJ-Romain Jerome, Manuel Emch and his team are thus launching an exceptional new model. Carved in legend and built to make history, the Steampunk combines the inventive daring and stringent demands of a passionately dedicated and uncompromising creative talent.

RJ-Romain Jerome
Air, earth, water and fire : RJ-Romain Jerome offers the raw energy of imagination to those who are capable of nurturing their most secret dreams. Born at the dawn of the 3rd millennium, RJ-Romain Jerome draws upon the strength of the elements to create the watches of the new horological era. The magic of the moon, the power of lava, and underwater mysteries are the poetic driving forces behind this creative explosion.

Whether through recovering steel from the Titanic or from the Apollo 11 space shuttle, of mingling silver with moon dust or sculpting volcano lava, RJ-Romain Jerome asserts its iconoclastic spirit and electrifies tradition by celebrating contemporary legends. Its approach is characterised by a blend of raw character and elaborate refinement, drawing as much on the roar of an erupting volcano as on the writings of H.G. Wells.

A taste for adventure, an all-conquering spirit and visionary avant-gardism merge with the realm of the imagination in the “Titanic DNA”, “Moon DNA” and “Eyjafjallajökull DNA” collections. These three worlds exalt contemporary horizons through a resolutely masculine and contemporary touch. From the ocean depths to the immensity of space, from incandescent lava to age-old minerals, the RJ-Romain Jerome collections are far more than just astonishing watches : they define a new era in watchmaking.

Offering every man a chance to explore a dreamlike new dimension, they also embody the values of their times : a sense of distinctiveness, a need for speed, and a spectacular yet discreetly sophisticated aura of virility.

Air, earth, water and fire : it is now up to everyone to find his own element, and to give substance to his dream and to his own vision of Time.