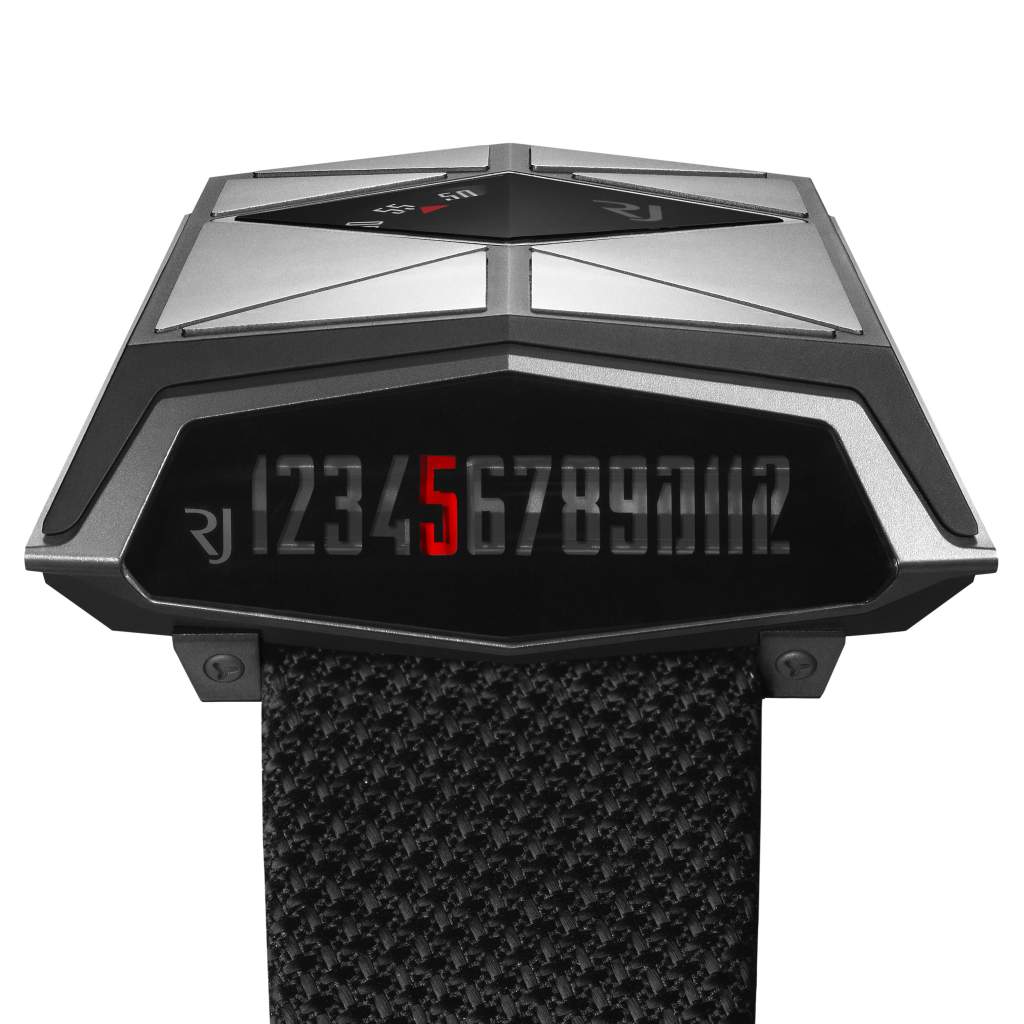 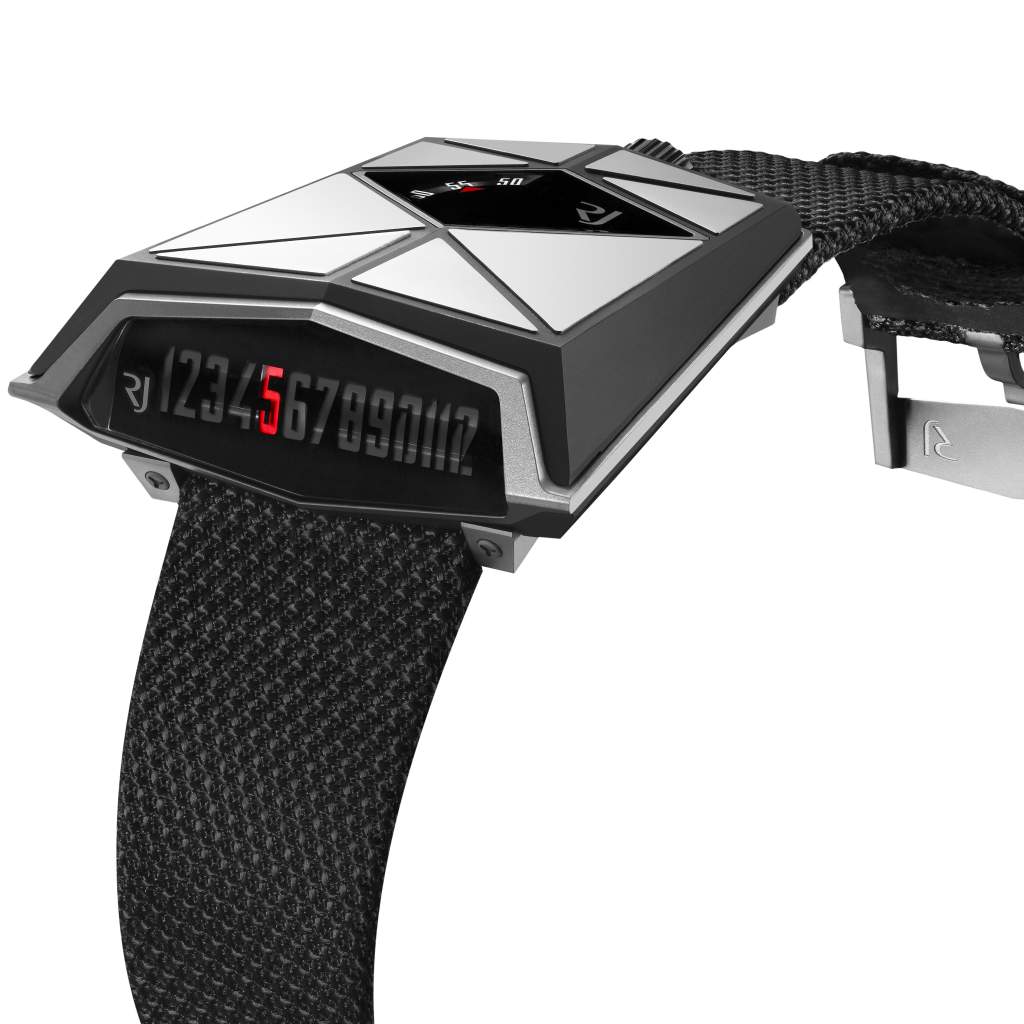 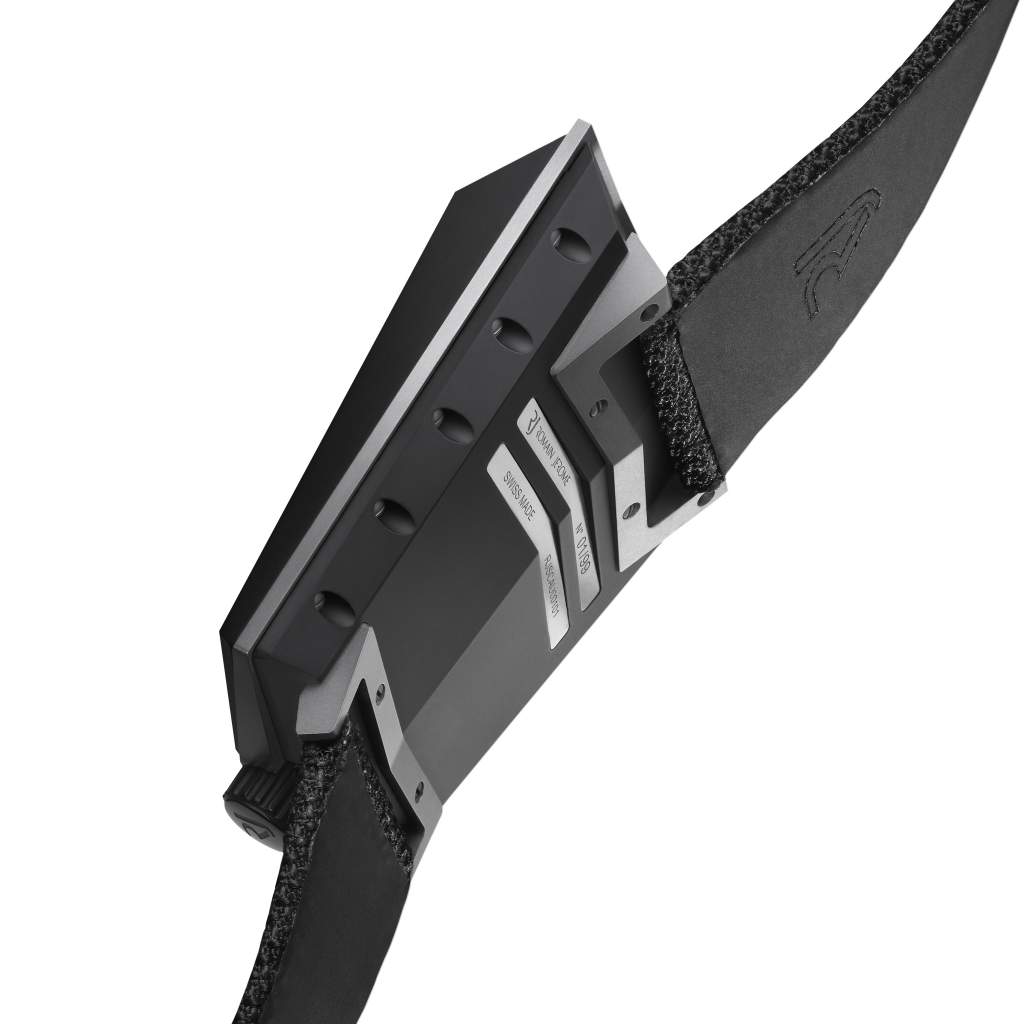 In taking up this challenge, Manuel Emch, CEO of RJ-Romain Jerome, chose to associate with two of the top names in the watch industry: Eric Giroud and Jean-Marc Wiederrecht. The three men pooled their ideas and their creativity to give rise to a unique timepiece they named Spacecraft. Right from the first sketches, Manuel Emch and Eric Giroud imagined a very different type of product, combining retro-futuristic aesthetics and horological complexity. “The design evolved in step with our discussions and our numerous exchanges. That is what makes it such a singular object”, explains Eric Giroud. An unusual trapeze-shaped model featuring a black PVD-coated titanium case, the Spacecraft both surprises and intrigues. Its rectilinear profile and its facetted surface echo the aesthetic of spacecraft. A black rotating disc with a red indicator transferred on the sapphire crystal indicates the minutes on the top of the case, while the linear hour display is read off laterally, thereby giving time a whole new dimension.

The pure lines and the apparent simplicity of the Spacecraft conceal a particularly complex movement – which is where the third mastermind behind the project comes into the picture: Jean-Marc Wiederrecht. It was in the latter’s Geneva-based manufacturing facility Agenhor that this mechanical self-winding movement was exclusively developed for RJ-Romain Jerome. “The combination of these four functions – lateral, linear, jumping and retrograde hours – is unprecedented”, says Jean-Marc Wiederrecht. The movement features a kind of spring-driven carriage that drives the hour display visible on the side of the watch by means of a red-lacquered cursor moving beneath the metallised sapphire crystal every 60 minutes. The dragging minutes, appearing on a black disc, are read off on the top of the case that also features beadblasted titanium plates. Time-setting is done via a screw-lock crown at 12 o’clock. The Spacecraft watch is fitted with a black polyamide mesh strap. This 99-piece limited edition will delight devotees of horological complexity and original products.

Manuel Emch sums it up in these terms: “The concept we have created with this collection reflects a new approach for the brand, meaning facilitating access to innovative, contemporary and offbeat watchmaking.”

With this exceptional creation, RJ-Romain Jerome offers a new way of reading the time, as the well-named Spacecraft carries you away to explore new planets at the speed of light.