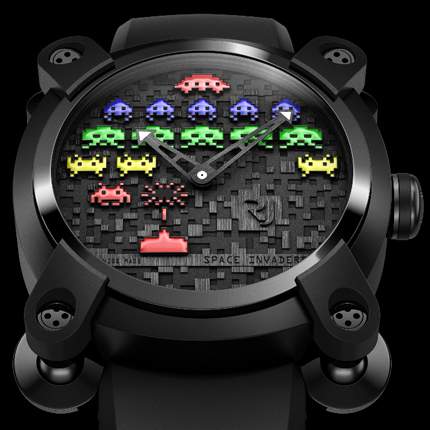 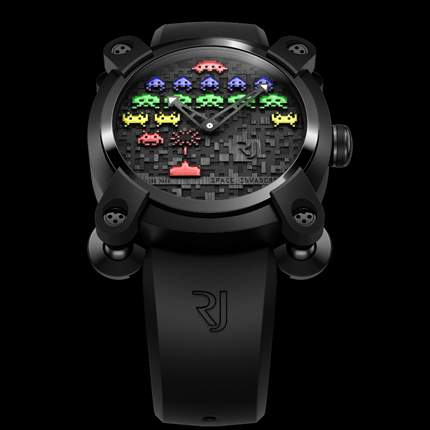 Psst !… Don't spread the news, but they are already among us : since first landing on our planet in 1978, the SPACE INVADERS® have colonised our world to the point of imposing their subliminal image on the collective unconscious of millions of human beings – many of them cured from their youthful game addiction only by the fact of reaching a more mature age… RJ-Romain Jerome, in connivance with TAITO Corporation (TAITO) is becoming an accomplice of this incursion by agreeing to create two 78-piece limited series in honour of these SPACE INVADERS. Reality at last surpasses fiction.

Manuel Emch, CEO of RJ-Romain Jerome, freely admits to belonging to the generation of former SPACE INVADERS junkies. The game has become a legend for all those who grew up in the 80s, since it was the first "Killer app" for video game consoles installed in gaming arcades. The SPACE INVADERS craze even led to a shortage of 100-yen coins when it was first released in Japan. SPACE INVADERS with its pixelated figures was the first ever "iconic" form of entertainment : thousands of hours of TV programs and hundreds of cultural exhibitions have been devoted to this generational "legend".

So why a SPACE INVADERS limited series from RJ-Romain Jerome ? One possible response – although the truth doubtless lies elsewhere – is that no other brand could have risked such a daring evocation of this epoch-making video legend. By agreement with TAITO Corporation (TAITO), RJ-Romain Jerome is paying tribute to late-20th century pop culture by launching a double limited-edition of SPACE INVADERS watches, designed like generational totems. By allowing the SPACE INVADERS to proliferate on the dial of these watches, Manuel Emch is proudly proclaiming the brand's resolutely standout mission within the fine arts of contemporary watchmaking.

Inheriting the highly distinctive case of the Moon Invader series (a round shape within a cambered 46 mm square, with a round front and an almost rectangular back), the SPACE INVADERS have also kept the same steel coalesced with fragments from the Apollo 11 capsule. It is no coincidence that this case is designed like a strongbox, or even like a space vessel capable of travelling great distances, since that kind of vehicle is exactly what is needed to facilitate the SPACE INVADERS colonisation of our daily lives.

The four functional ball-and-socket joints of this rounded squares are cut like the pivoting "feet" of the lunar landing modules of the American lunar missions. These extremely sophisticated components mounted on axles anchored in the case hold the lugs of the rubber straps and enable the watch to adjust to all kinds of wrist sizes.

The RJ security screws (stamped with four cup marks), representing the SPACE INVADERS signature feature, are echoed on the functional movement-locking screw on the case-back. They confirm both the legendary universe and the distinctive RJ design codes.

Embodying another tangible token of the space age symbolised by this new SPACE INVADERS collection, a dedicated plate made of Moon SilverRJ – a silver alloy with an extremely low oxidisation rate incorporating moon rocks – appears on the stellarpatterned back of the watch. This engraved plate reproduces the lunar surface, of which the mineral particles interact on an infra-molecular level with the wearer of the watch. The veined pattern and grainy texture also extend along the rubber strap.

The two 78-piece limited series are distinguished by their dial. The latter is composed of three layers of pixelated and shotpeened dies featuring hand-drawn file strokes. The 3.5 mm-sized SPACE INVADERS are lacquered in different colours ("day" version) or coated with Superluminova ("night" version), each individually machined and hand-applied.

These invaders are a playful nod that transforms these watches into inspired talking pieces capable of creating ties based on natural affinities between the people wearing them – and who in doing so consciously adopt this humorous and original way of thumbing their noses at classic watchmaking conventions. A new contemporary and generational legend is born…

About TAITO Corporation
TAITO Corporation (TAITO) is a wholly-owned subsidiary of Square Enix Holdings Co., Ltd. With headquarters in Tokyo, Japan, TAITO operates core businesses such as game arcade operations, coin-operated game machines, and mobile phone content services. A seminal part of gaming history, TAITO caused a worldwide sensation with its arcade legend, SPACE INVADERS®, and developed such fan favorites as PUZZLE BOBBLE® (BUSTA- MOVE®) and ARKANOID®. Today, TAITO continues to thrill game lovers of all generations by offering both classic and new family-oriented titles on the latest gaming platforms. TAITO delivers a wide range of entertainment experiences with the goal of providing consumers with fresh surprises and new discoveries. More information on TAITO can be found on the Internet at http ://www.taito.com/.

TAITO is the exclusive owner of the global intellectual property rights, including copyrights and trademarks, for SPACE INVADERS and its characters, and takes an active role regarding new SPACE INVADERS-related enterprises.