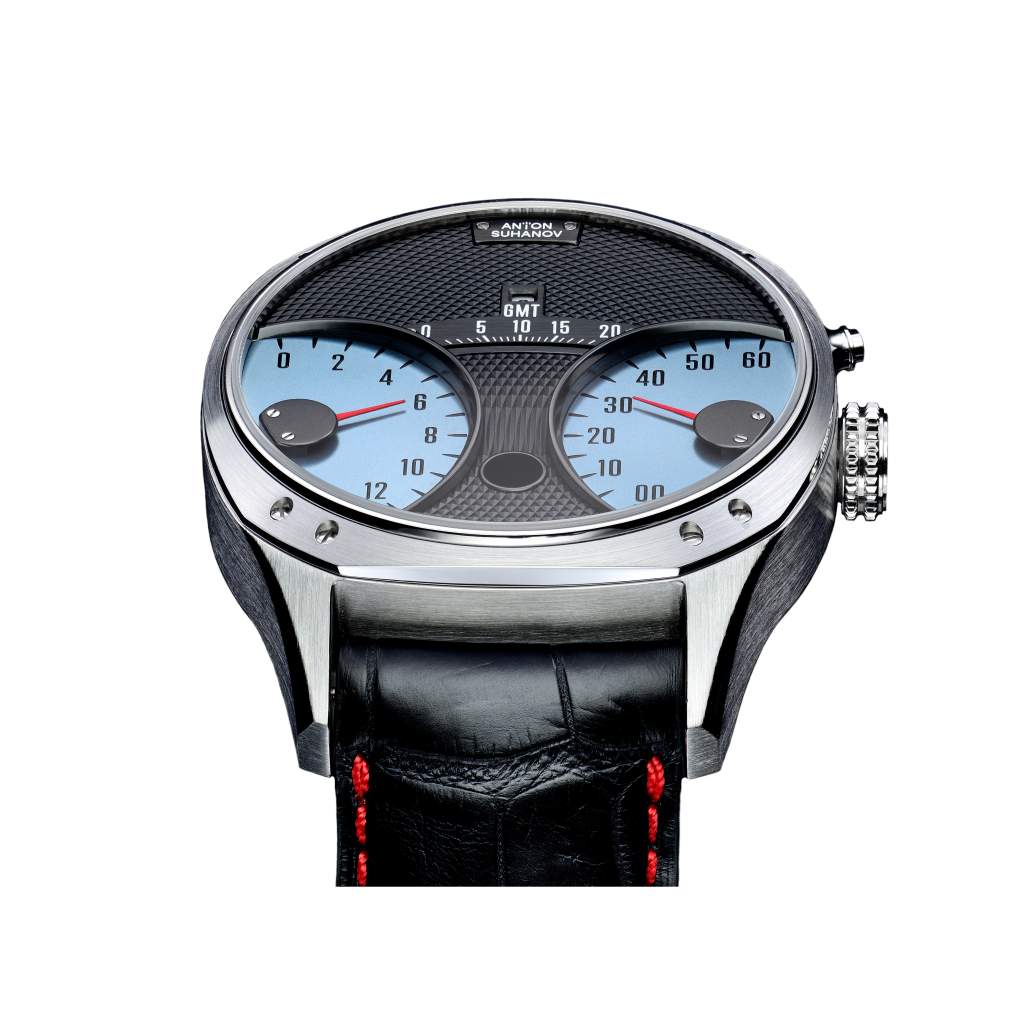 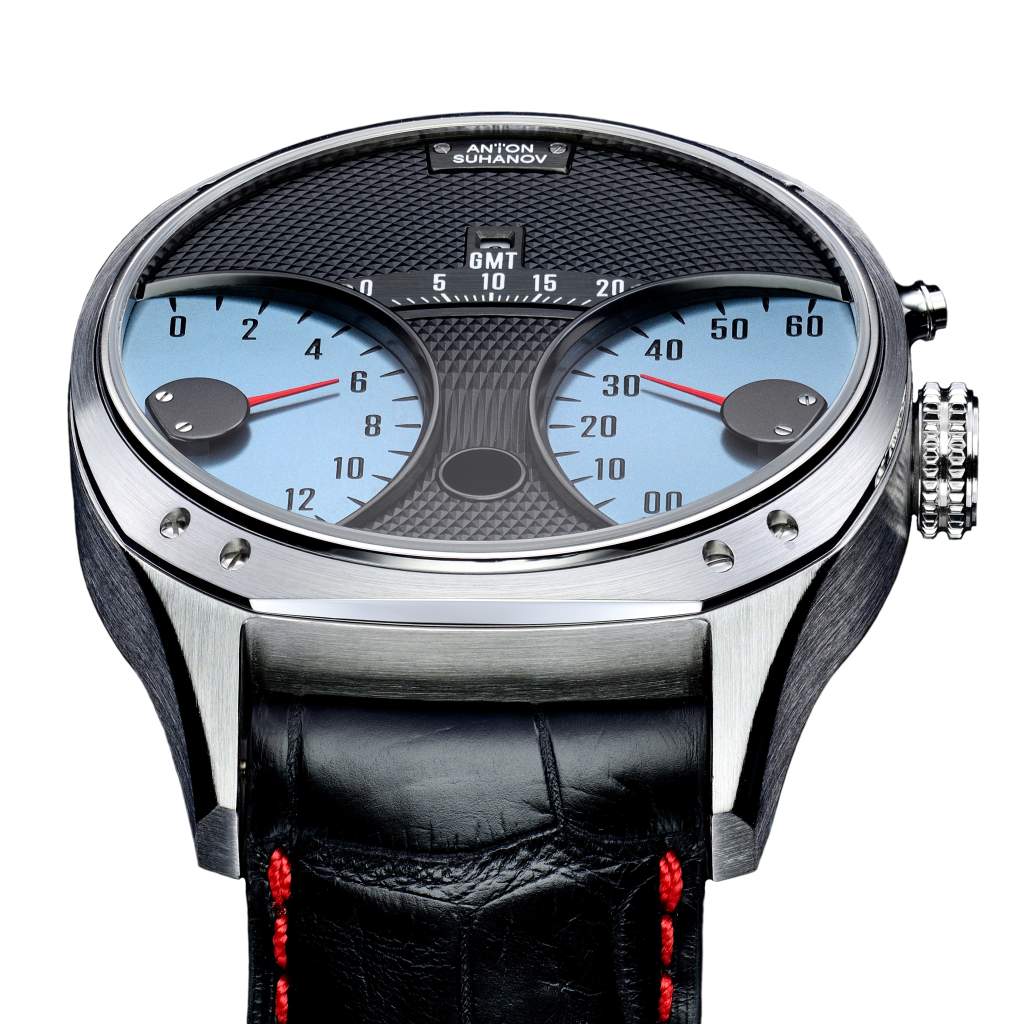 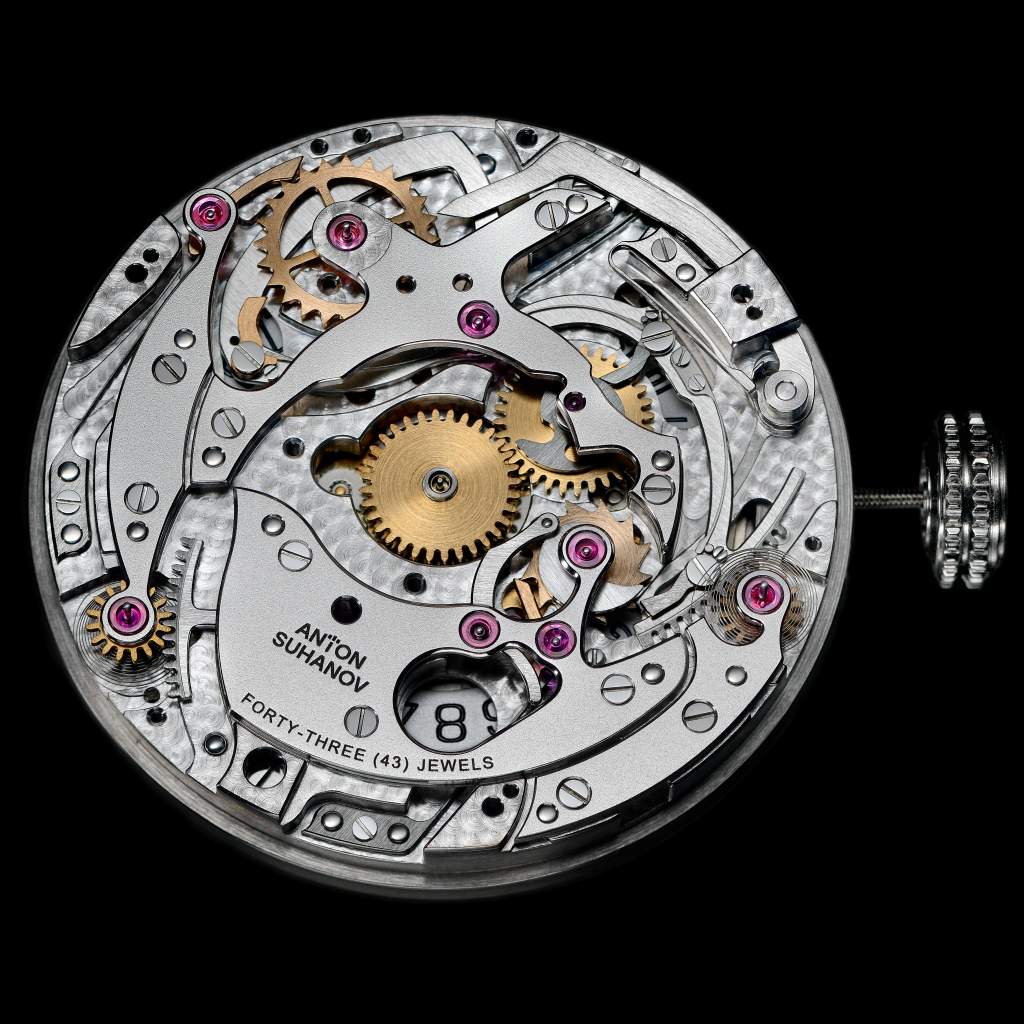 Anton Suhanov, an independent watchmaker and creator of the triple-axis tourbillon table clocks, presents Racer Jumping Hour GMT wristwatch. In 2016, Anton Suhanov broke into the world of fine watchmaking when he was recognized as one of three winners of the Young Talent Competition 2016, conducted by Académie Horlogère des Créateurs Indépendants (AHCI) with a kind support of François-Paul Journe.

The idea of a Racer Jumping Hour GMT wristwatch, as is often happens, came to Anton Suhanov by chance. One day, driving his car to the workshop, Anton got the inspiration of a watch created on an automotive style. Thus, the Racer Jumping Hour GMT watch was born: a glance at the dashboard of the car, where on the left is a tachometer, on the right is a speedometer, between them there are some additional indicators and numbers... Starting from the desire to create a one-of-a-kind fusion of horological mechanics and emotions, Anton Suhanov step by step developed the structure of the dial with prevailing on it two retrograde hour and minute subdials. They are located on the left and right and slightly shifted down – exactly for one position on the (imaginary) hour scale of the dial, while the remaining central part of the dial is given away to other pointers. It is this design that gives a unique feeling of fleeting glance at the car dashboard – indeed, no one constantly looks at the meters while driving, this is unreasonable and dangerous! Watch has its advantage; nothing stops you from admiring the dial of a unique layout and high-class finish. This particular arrangement has historical prototypes, one of them is the dial of the famous pocket watch ‘Marie Antoinette’, life-long masterpiece of Abraham-Louis Breguet, with two retrograde subdials of date and equation of time. Racer Jumping Hour GMT shares with Breguet’s ‘Marie Antoinette’ another common unobtrusive but intriguingly interesting technical feature of jumping hour hand.

For a unique design, it should be created a unique caliber, Anton Suhanov is convinced of this. He decided to build a watch with the indications based on the function of the retrograde action of a minute hand. He invented the complex design. At the beginning of a new hour, the minute hand jumps from 60-minutes to zero position, and this rapid movement, almost imperceptible by the eye, performs two actions: it switches the retrograde hour hand one hour forward, and then the hand remains motionless for an hour. This is exactly how functions the hour hand of a ‘Marie Antoinette’. And at the same moment the 24-hour digital second timezone indicator of Racer Jumping Hour GMT, situated in the window at 12 o’clock position, goes one hour ahead. In the center of the dial, there is an unusual second’s indicator on a dynamic 20-second arc-shaped scale – this is one of the consequences of the master’s principle of dynamics and leisurely perception of time combination.

The indication module of the Racer Jumping Hour GMT is very complex: it took 172 parts to assemble, so by this, it is comparable to classic horological complications as a perpetual calendar or minute repeater. In producing the parts of the module, the master was guided by the traditions of fine watchmaking, although the indication module remains hidden under an opaque dial – this choice is also recognized as one of the fundamentally important traditions of watchmaking. The master treats every detail of the module with the utmost care, and, sparing no time on this work, he uses traditional techniques, including manual polishing of chamfers, engraving, polishing of recesses for screws, pins, and stones, spherical polishing of the shafts of the wheels and pins, perlage, fine straight, and circular grinding, sand-blasting, rhodium plating. The dial is finished using the anodizing, ruthenium coating, and guilloche.

The dial of the Racer Jumping Hour GMT is unique, but so is the stainless-steel case of a watch. Its design is based on the principle of the regular Reuleaux polygon, this shape can be briefly described as a square with rounded sides. Anton Suhanov chose this form, believing that it best suits his idea of a dynamic, but the leisurely perception of time. Double screws for fixing the bezel, visually duplicated by paired screws for the pads of the axes of the retrograde hands and plates with inscriptions and a scale of seconds, give the design an almost obligatory technical character for car-inspiration watches, even more, reinforced by the double knurling on the crown and the whimsical shape of the conical holder of the button for switching second timezone indicator.