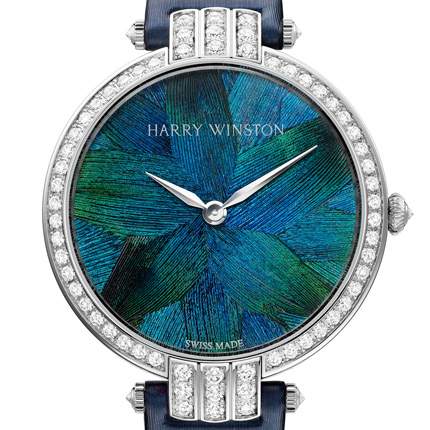 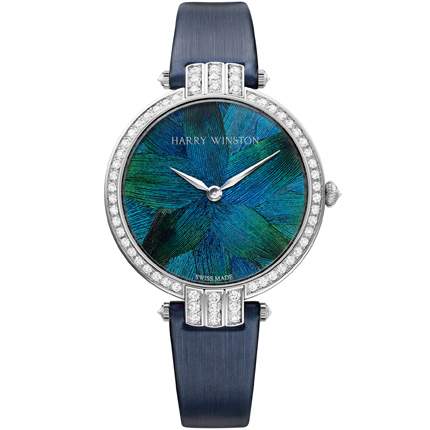 The touch of a feather brings out the magic of time

It was a truly romantic idea: to bring together two ancient arts, one rooted in the hearts of men and mountains of Switzerland and the other, nearly forgotten, marked by its exceptional lightness. Watchmaking and feather art share a passion for careful work and manual dexterity. Of this exceptional marriage was born Premier Feathers, which follows in the footsteps of Harry Winston's very first watch collection.

Revisiting the aesthetic codes of the Premier Collection has given rise to the sophisticated curves of the case, which sensually dresses the wrist, while the three neoclassical arches are reminiscent of the famous facade of the Harry Winston salon in New York. The Premier Feathers opens the doors to a universe where beauty is expressed in its purest form. The dials on each of these four models are decorated with marquetry in the great tradition of feather art which was embellishing the headwear and other finery of royalty.

Harry Winston entrusted this delicate task to Nelly Saunier, one of the few craftspersons who still practice the technique. The feathers, sourced with a respect for the environment, are obtained from species raised specifically for this purpose, and each is selected with great care. Only the most beautiful are chosen. In some cases they are cut to size or shape and positioned on the surface of the dial, under a loupe to ensure the most accurate possible placement. Each dial takes approximately seven hours of work to make, a task requiring great skill and dexterity. Like watchmaking, this technic is a time-intensive craft. It also takes true virtuosity to bring out the shimmer of the feathers – a living, fragile precious material – while creating subtle reflection.

Like the 16th-century feather mosaic pictures so prized in Europe, each dial is unique. Every model has its own personality. The silvery dial symbolizes refinement and sensitivity, the black one with white touches reflects the ultimate in elegance. The peacock-feather composition expresses femininity and sophistication, while the deep-blue creation embodies mystery.

The feather dials fit perfectly with the setting of the timepiece. This collection pays tribute to Cluster, the three dimensional setting technique invented by Mr. Harry Winston which enables a spontaneously asymmetrical association of brilliant, pear and marquise-cut stones. Delicately cut, the precious stones are nestled against each other to form a sparkling composition.

With Premier Feathers, Harry Winston has worked all of its magic: a precious esthetic, a love for the artistic crafts, and the desire to perpetuate an unrivaled skill that beautifies women like no other.