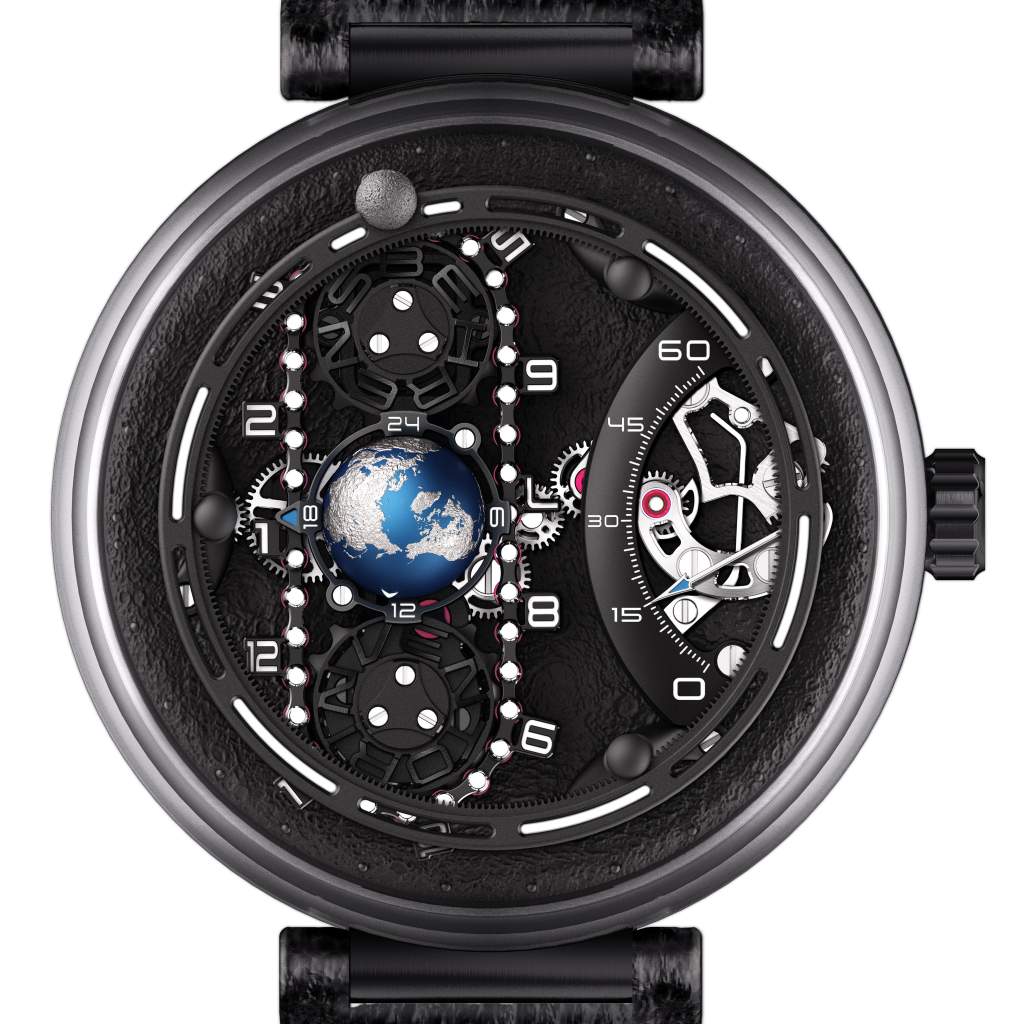 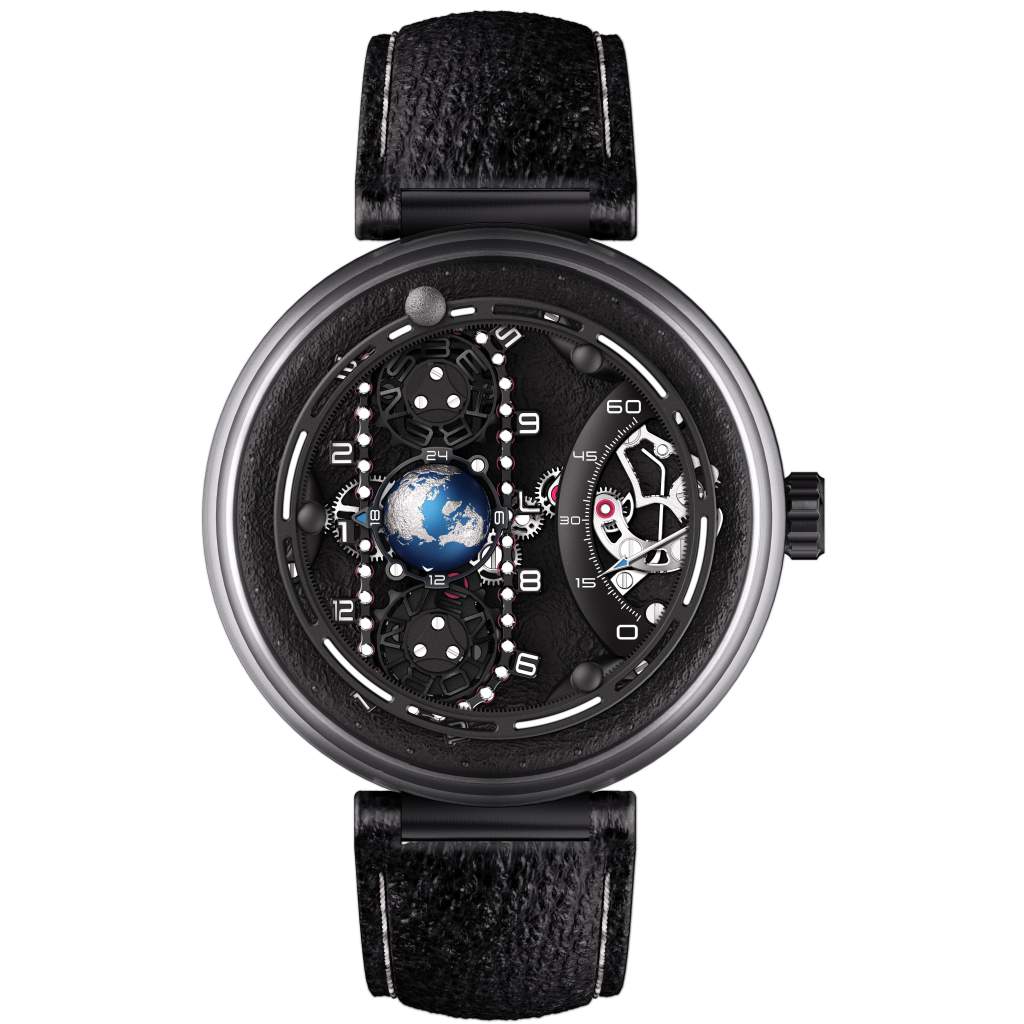 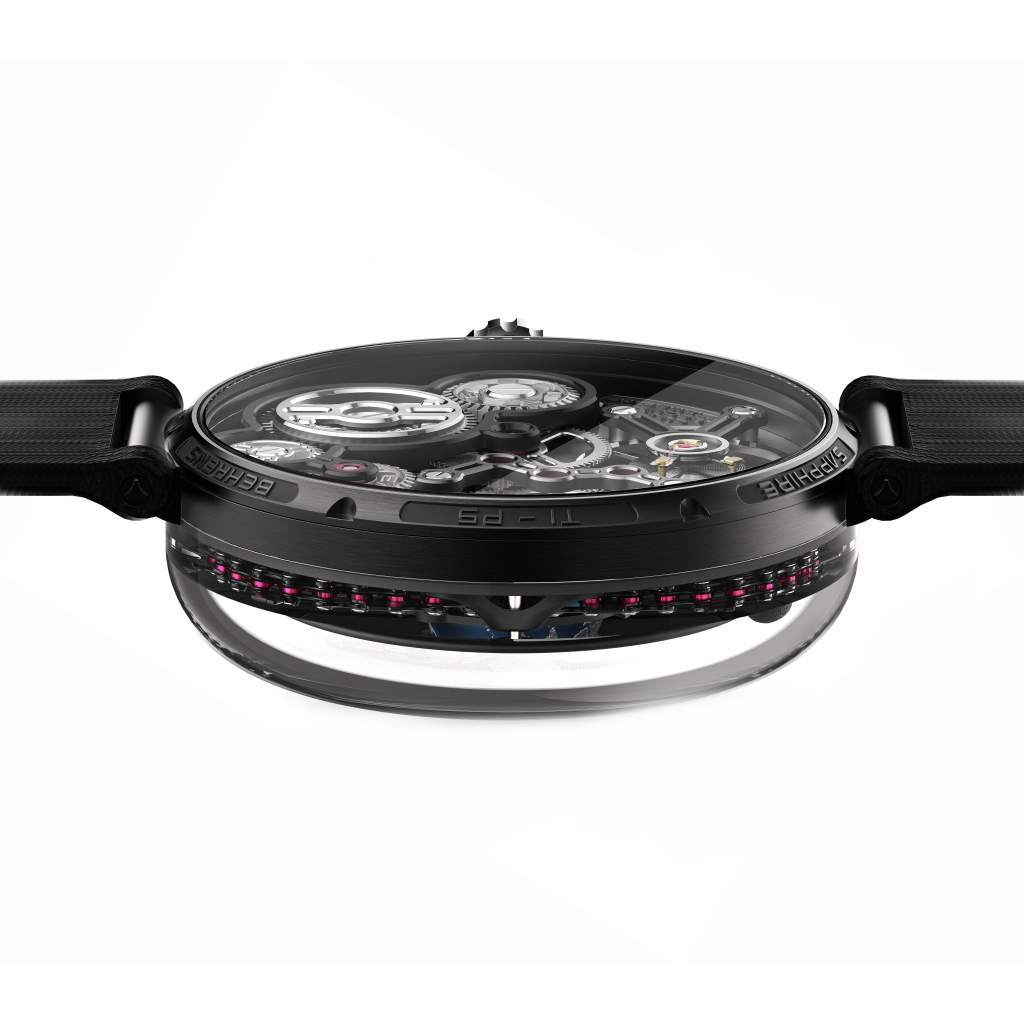 PERIGEE is a new model from BEHRENS family which we have completely designed and constructed based on some of our signature design features in cooperate with completely new mechanical modules. Functionally, this unique timepiece is featuring with a rubies chain driven hours' display, a moon track system, a domed globe 24-hour indicator, retrograde minutes and cased by a size 43mm titanium round case with a domed sapphire crystal. Furthermore, it also has a completely new designed in-house manual wind movement by BEHRENS.

While continue development has been a major goal for BEHRENS. Throughout the past years, apart from designing and developing our wristwatch collections with innovative mechanical modules, we have also been working on the development of our own in-house movement as part of the brand’s future strategy. After years of hard work and testing conducted, we are finally at a stage where we can announce our 1st ever in-house manual wind movement (2.5Hz / 18,000) which will be featured in our latest new design PERIGEE wristwatch in 2022.

The Traits of this movement is that we have integrated the architectural elements into the design structure (holding plates) of the movement to obtain a good mix of classic and modern touch. The basic bridges and main plate will be black coated to add contrast. There will be a new clutching mechanism for the winding system. A power reserve indicator and with the design of the bridges, allowing the gear train can be clearly seen.

The idea of this movement is not just another in-house movement, but a modern design movement that allows the motion of the movement to be clearly seen as part of the enjoyment towards this PERIGEE model.

What makes this ruby chain system so special is that each of the links of the chain will be installed with rubies at the linkage to minimize friction to gain overall efficiency and to avoid energy / power lost. The difficulties for making this chain mechanism are that it requires a very high precision for production of parts as well as installation skills, so that it can be operated properly under different environments (such as temperature difference).

*** Chain drive system mostly appears in the automotive industry as an energy / power transmission mechanism and is always driven by gears. In simple terms, simply just like power transmitted from the engine of a motorcycle to the rear wheel.

Apart from this stunning Ruby Chain mechanism that will be driven by 2 main skeletonized gears that drive the 12 hour’s number tags attached to the chain for display of the hours, indicated by a blue pointer locating on the left-hand side of the Globe. The domed Globe, which has been one of BEHRENS signature design, is also acting as a Day / Night indication which turns 24 hours per cycle.

Then on the right-hand side of the dial, it’s a retro-grade type minutes display (with skeletonized design to show the relative mechanism). Furthermore, like our GPHG2020 nominated model, APOLAR, PERIGEE model will feature our 2nd generation Moon Track system that tells the position of the Moon in relation to the Earth during the month.

PERIGEE model also featuring an all-new designed round case (43mm), coated in black attached with a domed sapphire crystal top to maximize the visibility of the mechanical module on the dial. The dial base has been designed as a simulation to the Moon surface in black.