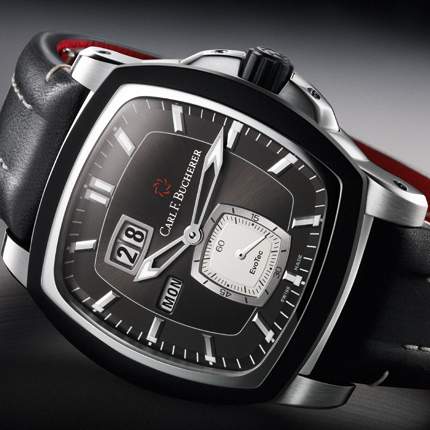 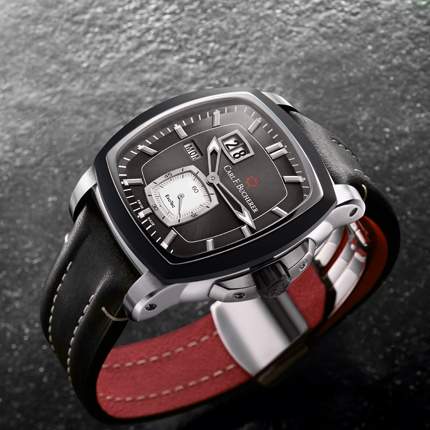 High-quality interior in an innovative case.

Carl F. Bucherer presented the CFB A1000 caliber at Baselworld 2008. This year will see the brand equip its first watch model with this extraordinary automatic caliber: the Patravi EvoTec DayDate. A specially developed functional module has been added to this outstanding watch from Carl F. Bucherer, whose innovative characteristics extend beyond its exclusive interior to adorn the exterior beautifully.

A new – one might even say revolutionary – chapter in the history of watchmaking began at Carl F. Bucherer in 2005. It was at this time that a momentous decision was taken to crown the company's watchmaking history with a caliber developed and produced by the company itself. But there was never any question of copying existing movements.

Quite the opposite: Carl F. Bucherer wanted to create something new in the form of an automatic movement equipped with a wealth of unique design features. Following highly specific plans developed with the company's long term co-operation partner Techniques Horlogères Appliquées SA (THA) in Ste-Croix, on 1 July 2007, Carl F. Bucherer acquired this highly regarded workshop, together with its excellent development and production skills. The next step consisted in the systematic integration of the workshop into the Group, and the renaming of the company as Carl F. Bucherer Technologies SA (CFBT).

In addition to producing new modules to the delight of wearers everywhere – for example, the trailblazing Patravi TravelTec with its outstanding functional features – the Ste- Croix team has continued to channel its energy into the production of the exclusive automatic caliber known as the CFB A1000, which was premiered at Baselworld 2008. New case shape for the Patravi line. The Carl F. Bucherer's Patravi line is the undisputed leader of both a watch brand steeped in tradition (founded in Lucerne in 1919) and a new Manufacture (recognized as such in 2008).

The Manufacture's first product, the equally innovative and extraordinary CFB A1000 automatic caliber, needed an appropriate setting once it was ready to go into production and had been fitted with its first specially developed functions module. The striking Patravi line offered the perfect solution for the following reasons: firstly, the case, with its stylish strap bars and striking flank crown protectors, is truly iconic in nature. Secondly, the design is perfectly suited to allow for the development of various shapes, as is impressively demonstrated by the round and barrel-shaped Patravi models.

Thanks to the launch of the new CFB A1001 caliber, based on the CFB A1000 movement, the Patravi line is enjoying remarkable design expansion. The strongly expressive, cushion-shaped case of the Patravi EvoTec DayDate, which is generously proportioned at 44 x 44.5 mm, is the perfect setting for this example of the art of mechanical watchmaking. Its highly acclaimed first public appearance was an unusual and striking version that featured a small seconds hand at 6 o'clock, which skilfully echoed the shape of the case, a clearly formed weekday display at 9 o'clock, and an exuberant large date display in the upper-left quadrant of the dial. The dimensions of the latter are sensational, even for a large date display. The geometric index marks echo the slightly convex flanks of the case and underline the deliberately pared-down, modern design concept of the Patravi EvoTec DayDate.

A module developed in the CFBT workshops makes these two additional calendar functions possible. This module is positioned under the impressive dial – in elegant anthracitegrey and black for the stainless steel version, and in warm brown tones for the rose gold model –, on which the distinctive luminous hands turn to count the passing hours Carl F. Bucherer – a brand of Bucherer Montres S.A., Langensandstrasse 27, CH-6002 Lucerne, Switzerland, www.carl-f-bucherer.com and minutes. To ensure that the duo impacts as little as possible on the indications positioned underneath, the module has been largely skeletonized.

The time-indication ensemble, i.e. the dial and hands, is framed by a broad rubber bezel. Naturally, both the front and back of the striking yet elegant case feature sapphire crystal. The diameter of the case permits an unimpeded, and above all breathtaking, view of a precise and regularly ticking microcosm, which is simply the best in its field. Exactly ninety years after its first watch was released, Carl F. Bucherer is proud to present a supreme masterpiece of watchmaking art that demonstrates what entrepreneurial courage, a wealth of original ideas, craftsmanship, and technical skill are capable of achieving seven hundred years after the art of measuring mechanical time was first discovered.

Without doubt, the Patravi EvoTec DayDate is just the first step towards a new era in watchmaking. Faithful to company tradition, the aim of the Carl F. Bucherer team is to produce variety starting from perfect platforms, such as the new CFB A1000 automatic caliber. A caliber with extraordinary qualities.

The interior of the Patravi EvoTec DayDate is brought to life by the CFB A1000 caliber. This movement represents a genuine technological evolution within the field of mechanical time measurement, as the name EvoTec expresses.

The most important characteristic of the CFB A1000 is its skilful synthesis of conventional and innovative elements. Tried and tested technology, such as the classic Swiss escapement and traditional train, is combined with a highly progressive caliber design that permits an unimpeded view of the bridges, bars and balance spring.

What has made this possible is a not entirely new, but very different, way of positioning, guiding and structuring the rotor and self-winding system gear train. Quite deliberately, the watchmakers have turned away from the traditional central rotor, which always covers half of the movement and requires additional height. A micro-rotor integrated into the movement was also rejected, because it reduces the amount of space available for other components.

Thus, in the CFB A1000 caliber, the rotor runs around the entire periphery of the movement thanks to a mounting that is regarded by watchmakers as being one of the most demanding and challenging creations of all. For this reason, it has hardly ever been created successfully in the past. The ultimate advantage of this type of rotor is that it combines the technical values of the central rotor with the visual advantages of the micro-rotor.

When it came to making the decision in favor of the “outrunner” principle used in the CFB A1000, all those responsible were aware of the fact that much – indeed if not all – would have to be rethought and intelligently designed from different perspectives. Continuing on the same old path was an option which was categorically rejected, not only at the Head Office in Lucerne but also in the technological center in the Jura. This creation thus represents an entirely new conception and design of self-winding mechanisms. An initial difference (which, on closer examination, is in fact an essential difference) between this model and the usual tried and tested systems is the patented rotor mounting, which is assisted by DLC-coated rollers (Diamond-Like Carbon), which are themselves mounted on ball bearings. Although this “Diamond-Like Carbon” surface is only about a thousandth of a millimeter thick, it provides an extremely high level of resistance to wear and tear. Its hardness exceeds 2,000 Vickers, which makes it several times harder than steel, the customary material used.

The ball bearing / roller assemblies are mounted on rocking bars. Ingenious springs make for highly accurate positioning of the rollers, and eccentrics ensure precise adjustment of the bars.

A dynamic impact protection, known as DSA, has also been added. The Dynamic Shock Absorption system is outstandingly effective in all life situations. In the event of violent impact, the walls of the bridge limit the radial displacement of the rotor. The axial play is held in check by special screws, which thus prevents the rotor from banging against the bottom of the case.

As with any self-winding mechanism, the CFB A1000 must convert the high kinetic energy of its rotor into significant energy potential. This is carried out by a transmission wheel, which has been positioned between two Incabloc shock absorption systems to absorb violent impacts.

To make optimal use of the energy, the peripheral rotor supplies energy when turning in either direction. The rotor's movements are polarized by a low-loss winding system, which consists of two intelligently designed clutch wheels with eccentrically mounted clamp rollers. The motor spring stores energy for approximately 55 hours of power reserve. Yet this by no means exhausts the innovative potential of the CFB A1000. The frequency of the indispensable vibrating and escapement system is three Hertz, which corresponds to 21,600 vibrations per hour. The main focus of investment has been on the patented “Central Dual Adjusting System” (CDAS), a carefully thought-out precision adjustment system featuring a central control element. The system (“Repère”) requires adjustment only once, after which it is secured in position and thus protected from impact. To guarantee the system's long-term quality, precision adjustment can only be carried out using a special key issued exclusively to authorized service centers.

The balance and stem are bearing-mounted at both ends by Incabloc shock absorption systems, for experience shows that these guarantee optimum control of the end play. Naturally, Carl F. Bucherer also guarantees that its movement benefits from the highest quality decoration. The bridges and bars at their various levels have matt and brushed surfaces with diamond-cut facets. The high optical quality of other components is also ensured by matt, brushed or polished surfaces.

Finally, there is the question of flexibility. When it came to the development and design of the CFB A1000, the management and technical staff of Carl F. Bucherer thought far into the future. The movement is intended to be a precise, reliable and high-quality platform for useful additional functions that will delight lovers of fine mechanical watches over the coming years. There is no lack of ideas, prototypes and finished projects at the new Manufacture.