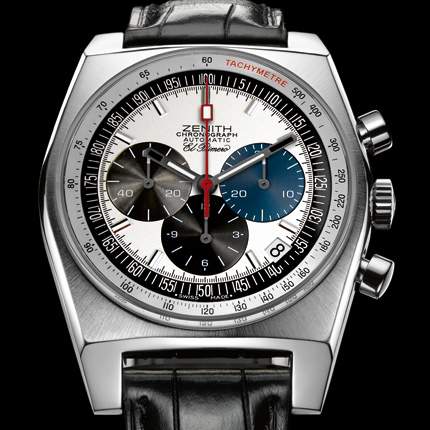 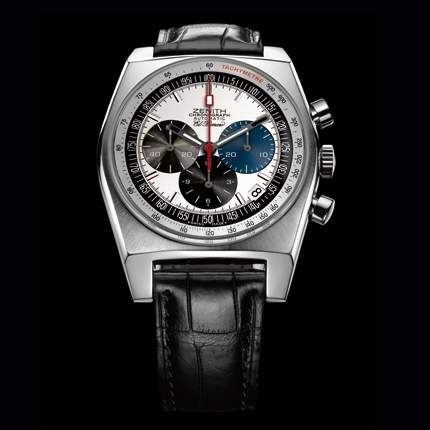 El Primero, symbol of excellence, is the first integrated automatic chronograph movement capable of measuring short periods of time with one tenth of a second accuracy.

1969, the world, eyes riveted to the TV screens, followed with bated breath Neil Armstrong's the first steps on the moon. The public was tremendously excited by the conquest of space, the dream of absolute and limitless freedom that unites all people.

Developed in 1969, rapidly becoming the benchmark of watchmaking, the El Primero 400 illustrates the creative genius and subtlety of ZENITH Manufacture.

Almost academic in design, making no concessions to anything unessential, El Primero is a masterpiece of innovation. Its perfect integration enables a movement that occupies very little space to be both reliable and accurate: the position of each plate, each gear and each component is optimized. Furthermore, the column wheel, the real conductor of the chronograph, centralizes and coordinates the orders transmitted by the push-buttons.

Unrivalled to date, El Primero is the only chronograph movement capable of measuring short periods of time with 1/10th of a second accuracy, a performance made possible by using a balance that oscillates at 36,000 vibrations per hour. This absolute accuracy means that the movement passes the tests of the COSC (Swiss Official Chronometer Testing Institute. As a double push-button chronograph with over 50 hours of autonomy, this movement – which also has an instantaneous jump calendar – can accept other complication add-ons: Triple Calendar, Moon Phase, Flyback...

Accurate, reliable and sophisticated, the El Primero, with its pearly, angular, planished decoration, is a symbol of excellence: it is a testimonial to the art of watchmaking down through the centuries and represents the pinnacle of watchmaking accomplishment.

Today the El Primero is centre stage, where it occupies a dominating position in the chronograph family.

In 2009, ZENITH celebrates the 40th anniversary of the El Primero which was created in 1969. This occasion is marked by the launch of a special serie celebrating the first timepiece to be fitted with the legendary El Primero calibre: New Vintage 1969 Originals.

This El Primero caliber has been named the 469 in nodding acknowledgement of the year in which the original model was created. This automatic Date Chronograph movement comprises 278 components and 31 rubies.

The tribute is orchestrated in 3 parts, with three materials for the same (40 mm) case design directly inspired by the original model, in a collector's limited edition series. We will re-issue the stainless steel models, produce a more refined gold version and bring them into the 21st Century with a titanium version. For “Le Grand Prix d'Horlogerie de Genève”, we are presenting you the steal model in reference to the present.

This serie, named « New Vintage 1969 Originals », is faithful to the vintage design, but with a subtle twist for the counters which meet and almost touch at the centre of the dial.

All those pieces will be available in limited and numbered series, during 2009 only.