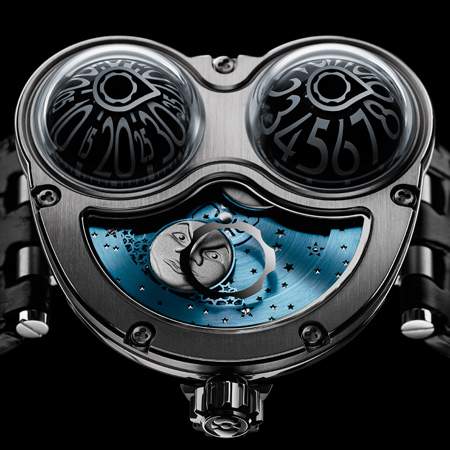 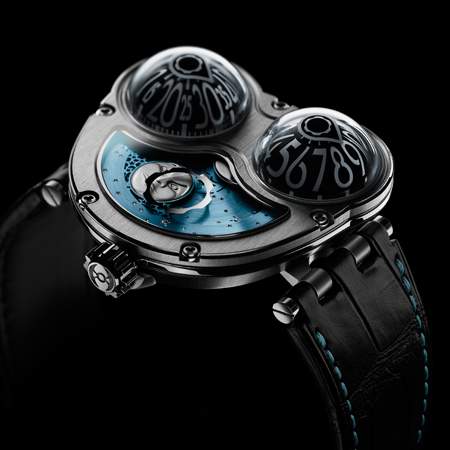 MOONMACHINE by Finnish watchmaker Stepan Sarpaneva is both the first of the MB&F Performance Art pieces by a watchmaker and the first to endow a Machine with a new complication. With MOONMACHINE, Stepan has taken a specially configured HM3 Frog and transformed it with his iconic moon-face moon-phase indicator set in a scintillating firmament of northern stars.

Stepan Sarpaneva: Stepan's three signature themes are all celestial: his very distinctive moon face based on his own face; the northern stars and constellations; and the crenellated form of his Korona case – the korona/corona is the plasma atmosphere of the Sun – and all three have been incorporated in MOONMACHINE. Sarpaneva's two moon faces indicate the phase of the moon through a Korona shaped aperture, while the mystery winding rotor is actually a steel and 22k gold disc with laser-pierced stars forming stars and constellations visible in the northern sky.

HM3 Frog: The Frog was chosen as the MOONMACHINE platform because the large visible movement opening in the dial side provides space for the watchmaker to play and the bulbous indication domes of the Frog are reminiscent of how science fiction buffs have long imagined habitable domes on the Moon. And this is no ordinary HM3 Frog – if such a thing can be said to exist – the domes of the MOONMACHINE are unique in that they are perpendicular, rather than parallel, to the wrist.

Rotating the large indicator domes posed a number of technical challenges. The domes are machined from solid aluminium to a paper-thin wall thickness of just 0.28 mm to reduce energy requirements to an absolute minimum. The semi-spherical sapphire crystal domes have to be meticulously machined and polished as the slightest imperfection might create disconcerting magnification effects.

MOONMACHINE may portray the time in a playful manner, but there is nothing but serious and meticulous attention to detail and care regarding the fine hand-finishing of the high-tuned engine purring within.

Northern Sky Rotor: The multi-layered northern sky rotor adds a stunning background to the twin hand-finished moon faces.  It also both disguises the potentially distracting HM3 gold winding rotor and makes use of its motion to add vivacity to the moving stars. The stars are laser-pierced allowing light to reflect from the movement underneath and are not simply placed at random: They form the seven brightest stars in Ursa Major, more commonly known as the Big Dipper/Big Plough/Big Bear, plus the seven brightest stars of Ursa Minor, more commonly known as the Little Dipper/Little Bear, which includes Polaris, the North star.

The turning star-filled night sky of the rotor not only brings metaphoric life to the MOONMACHINE, but also literally provides life as it generates the power for both the functioning of the moon complication and the movement. The iconic MB&F battle-axe sits in pride-of-place between the two moon faces at the axis of the rotor.