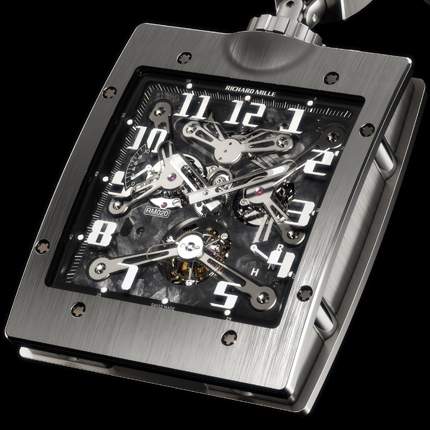 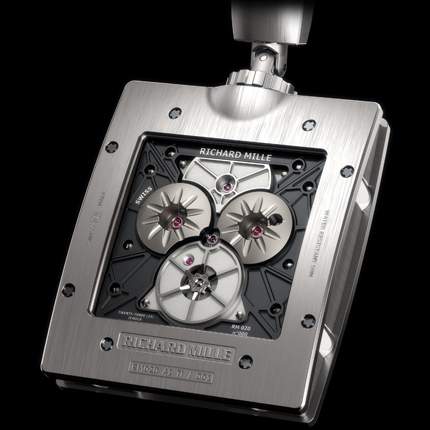 Originally the pocket watch was the ultimate symbol of freedom and prestige, a personal timekeeper that released one from the constraints of the public clock tower or the standing clock in one's home or office. It was the first timepiece that could be carried anywhere, and because of this portability horologists applied all their know-how in bringing it to the perfect realization of its mechanical essence.

RICHARD MILLE HAS REVISITED THAT GOLDEN AGE OF TIMEKEEPERS

Never prepared to just accept the past as it is, Richard Mille has revisited that Golden Age of timekeepers in order to bring a thoroughly modern and improved reinterpretation of a classic; a personal timekeeper that is ready to bring new impulses for today's collectors- the RM 020 tourbillon pocket watch.
The RM 020 is the first pocket watch ever created to make use of a baseplate made of carbon nanofiber, originally utilized in U.S. Air force jets. This is an isotropic composite material created from carbon nanofibers molded under a high pressure of 7,500 N/cm2 and a temperature of 2,000°C, resulting in a material with high mechanical, physical and chemical stability in all directions. It is ideally suited for guarantying the stability of the going train under varying conditions and temperatures.

The tourbillon escapement, (which was originally invented in the 19th century for the pocket watch format timepiece to begin with), is driven by a double winding barrel. Both barrels are directly coupled and supply circa 10 days of power reserve.

The RM 020 is further supplied with a titanium watch chain with a quick attach/release mechanism, and it can also be used as a pendulette de bureau with the additional desk stand. Perhaps the ultimate “time machine”, The RM 020 represents the perfect synthesis of the greatest 18th century horological values in combination with 21st century technology and aesthetics.

All versions will have a central caseband in titanium, with a choice of both front and back bezels in either 18ct red gold, white gold or titanium.