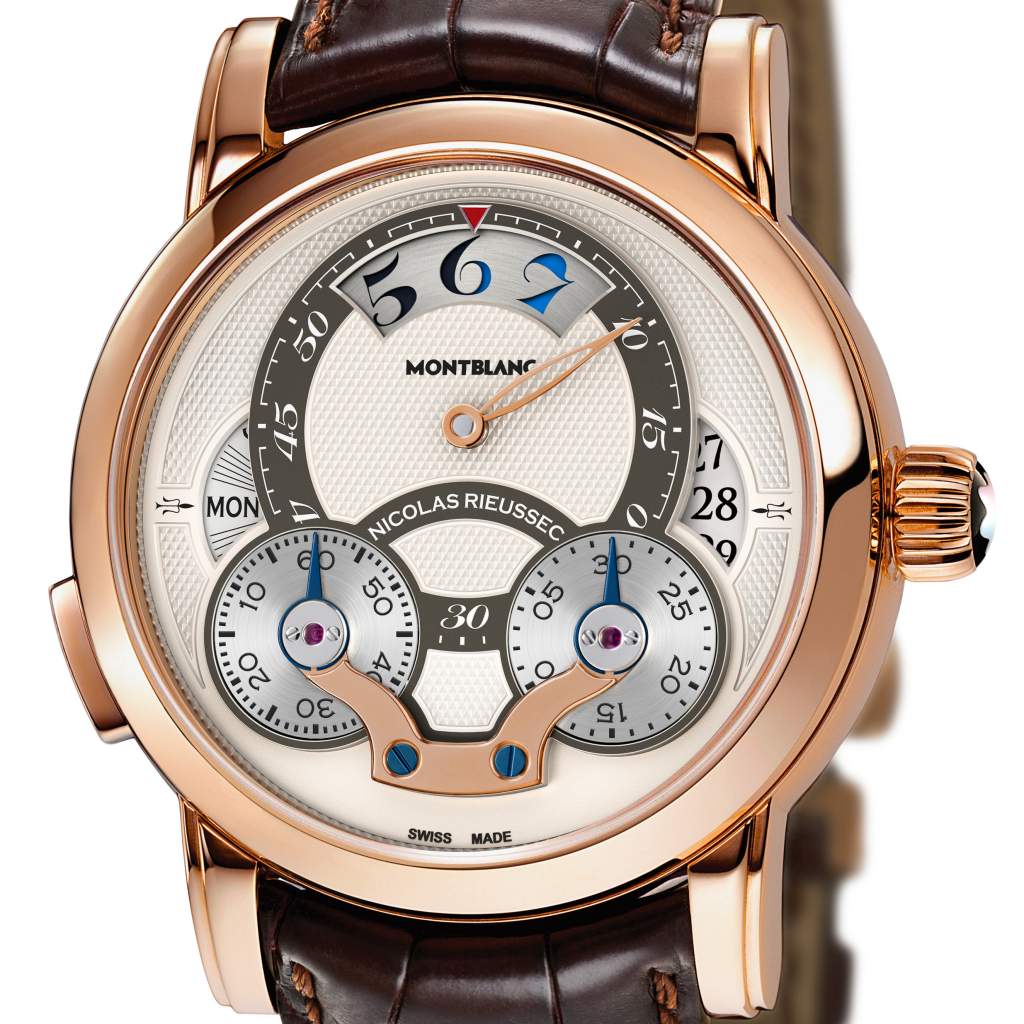 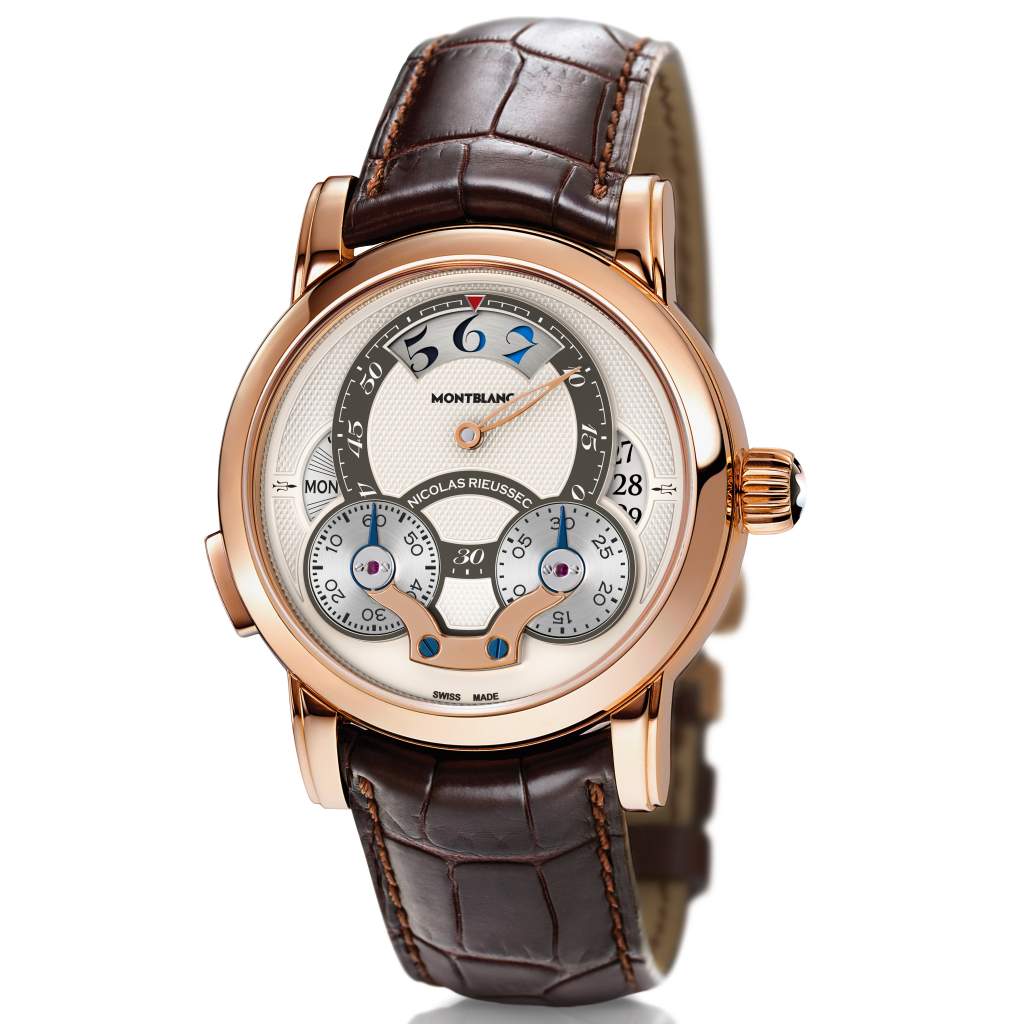 After observing the evolution of Montblanc’s Nicolas Rieussec chronographs, one might be tempted to conclude that time is a disc. Montblanc first used rotating discs to replace the hands on the chronograph’s counters for sixty elapsed seconds and thirty elapsed minutes. A rotating disc was afterwards installed to indicate the hour in a second time zone. And now the Montblanc manufacture debuts its Nicolas Rieussec Rising Hours, which relies on two discs, one atop the other, to show not only the twelve hours, but to also indicate whether each of the dozen is a daytime or night-time hour.

Although the time display on the Rising Hours chronograph is new and revolutionary, this timepiece is nevertheless a typical member of the Montblanc Nicolas Rieussec Collection, which first embodied an outstandingly successful idea in 2008, when the brand launched the first wristwatch chronograph with a genuinely new look in which the discs turn and its hands stand still. Now this principle has undergone further evolution to display the “ordinary” (i.e. non-elapsed) hours, which Montblanc’s engineers have augmented with an appealing complication: they’ve built a day/night indication into the hour display.

A digital hour display wouldn’t have been anything new per se. The hour numerals simply come and go beneath a stationary index, while the minute-hand turns its circles in the conventional manner. But the way the hours are shown on the Montblanc Nicolas Rieussec Rising Hours is technically revolutionary. Like all models of this collection, this watch too has a slightly off-centre dial for the ordinary time of day. But instead of an hour-hand, there is a circular aperture at the “12” in which a disc bearing Arabic numerals for the twelve hours turns below a little triangular index. Aficionados will no doubt have seen similar digital hour displays on other timepieces in the past, but the Nicolas Rieussec Rising Hours goes one decisive step further: its hour numerals change colour depending on the time of day or night. The numerals are pale blue during night time hours and black during the day. At a glance, this interesting function assigns each hour to the day or night and makes it easier to properly set the date display so that the date changes correctly at midnight rather than mistakenly at midday.

A New Montblanc manufacture calibre with a patented day/night mechanism

This unusual time display is made possible by the new manufacture calibre MB R220, which boasts an elaborate patented mechanism consisting of two rotating discs positioned one atop the other. The Arabic numerals 1 to 12 are cut from the upper disc. This twelve-hour disc turns above the bicolour day/night disc, which is half pastel blue and half black so that a light or dark hue appears in the skeletonised numeral in the window depending on the time of day or night. The twelve-hour disc rotates continually, while the day/night disc turns in intervals and at variable speeds to produce the desired colour change (pale blue for the night, black for the day) in the cut-out numerals. This complex motion is controlled with the aid of a Maltese cross mechanism consisting of two cam-like wheels. One of these cams is mounted on the propelling staff of the day/night disc; the other is affixed to an extension of the hour-staff.
Each cam’s profile is specially shaped so that the cams turn idly past one another between 9 a.m. and 3 p.m. (and again between 9 p.m. and 3 a.m.); the day/night disc is accordingly motionless throughout both these intervals. Meshing begins at 3 a.m. (and 3 p.m.). This engagement causes the day/night disc to turn at an increasingly faster pace until two teeth on either side engage in a way that the day/night disc no longer accelerates but instead continues to turn synchronously with the twelve-hour disc – this occurs from 4:30 a.m. to 7:30 a.m. (and from 4:30 p.m. to 7:30 p.m.). Afterwards, the day/night disc decelerates between 7:30 a.m. and 9 a.m. (and between 7:30 p.m. and 9 p.m.) until the meshing is completely separated, whereupon the day/night disc comes to a standstill.
This patented “Rising Hours” mechanism is particularly self-explanatory twice a day: at six o’clock each morning, the pierced digit “6” appears light blue on the left and black on the right to symbolize that night is ending and day is dawning; at six o’clock each evening, black daylight at the left yields to pastel blue night-time hours at the right.

In addition to this double-disc mechanism, four other disc displays rotate in the Montblanc Nicolas Rieussec Rising Hours. The day of the week is shown in a window at the “9” and the date appears in an aperture at the “3”. Naturally, the chronograph’s function likewise relies on the same unmistakable concept, with one disc to count sixty elapsed seconds and another to tally up to thirty elapsed minutes. The technical basis of the calibre with integrated chronograph is largely identical with the movements in the other Nicolas Rieussec models. This latest chronograph likewise has only one button, which is unconventionally but ergonomically positioned at “8 o’clock”, where the wearer’s thumb can conveniently operate it. In accord with tradition, this chronograph is controlled by a column-wheel which couples and uncouples in a very modern and low-wear manner via a vertical friction coupling. Also noteworthy are the innovative profiles on the gear-train’s teeth, which optimize energy transfer while minimizing both wear and energy consumption. The rate is regulated by a massy 10-mm-diameter screw balance which oscillates very regularly thanks to its high moment of inertia (12 mgcm²) and its frequency of 28,800 A/h (4 Hz). The regularity of the rate is further enhanced by the double barrel, which amasses a 72-hour power reserve and maintains a very constant level of torque throughout a lengthy interval. A self-winding mechanism keeps the power reserve constantly high as long as the watch is worn.

The exterior of the Rising Hours unmistakably announces that this is a Montblanc Nicolas Rieussec timepiece and instantly shows that it is indeed an unusual one. Characteristic features include rotating discs under motionless pointers for the elapsed minutes and seconds, as well as a two-armed bridge at “6 o’clock” with bright red ruby bearings which makes the dial look as though it was smiling. Above it is the off-centre dial to show the ordinary time of day or night via a skeletonised minute-hand and digital hour numerals. The day of the week appears in a semicircular aperture at its left, the date in a similar window at the right. The unoccupied spaces between and alongside these displays are embellished with grain d’orge (barleycorn) guilloche, which ranks among the most traditional decorative techniques in the art of watchmaking.

This timekeeping microcosm is ensconced inside a classically round, 43-mm-diameter case made of 18 K red gold with finely terraced horns. A brown alligator-leather strap with large reptilian scales is affixed between the horns. A triply folding clasp made of red gold closes and opens the strap. The fluted crown, which is likewise made of 18 K red gold, bears a mother-of-pearl inlay shaped like Montblanc’s emblem. The domed sapphire crystal above the dial is antireflective on both its surfaces. A second pane of sapphire is inserted into the screwed back to reveal the winding rotor, which is milled from solid red gold: the high specific gravity of this precious metal facilitates this component’s work.