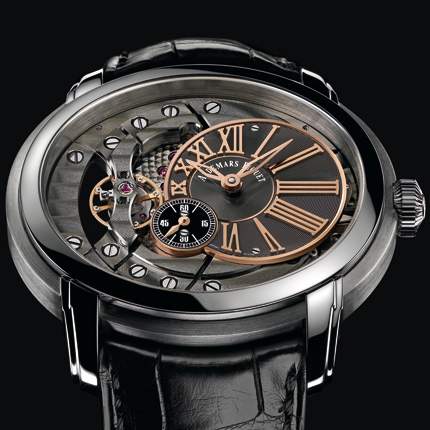 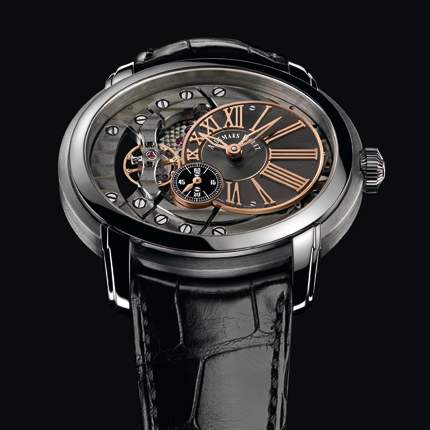 The Millenary 4101 overturns existing ideas, and in particular that which holds that the design involves the exterior of the watch and thus its outer garment, while the inside is essentially functional. Things are very different on this model, in which the inside and outside form a seamless whole merging functionality and design.

This model is represented by the oval case subtly accentuated by the contrast between the brushed case middle and the polished bezel, as well as the offset subdial with Roman numerals. The watch is thus viewed as a sophisticated whole distinguished by its three-dimensional, high-tech design.

Calibre 4101, entirely designed, developed and produced in-house, was built in such a way that the elements normally concealed on the back are now visible from the front. The regulating organ – composed of the balance, lever and escapement – has been reworked in order to meet this goal. It is located at 9 o'clock and offers a truly eye-catching sight. Its variable-inertia balance asserts a powerful presence with its eight inertia-blocks, its golden colour and the distinctive aesthetic of its cross-through bridge. The discerning eye will even detect the lever and the escape-wheel.
Moreover, no less than 12 bridges have been cleverly arranged on the surface of the movement. In addition to their functional role, which consists in holding the various parts in place, they also serve as attractive design elements, including by tracing three beautiful parallel curves on the dial side. Their decorative motifs – horizontal Côtes de Genève, circular graining; and snailing on the “trottoirs” – play with the different movement levels to accentuate the contrasts and depth effects. The screws on the left-hand side of the dial underscore the oval shape of the case and create a more technical and richer overall impression. The same goes for the hemispherical convex and particularly sparkling jewels punctuating the 10, 11 and 12 o'clock numerals on the dial.