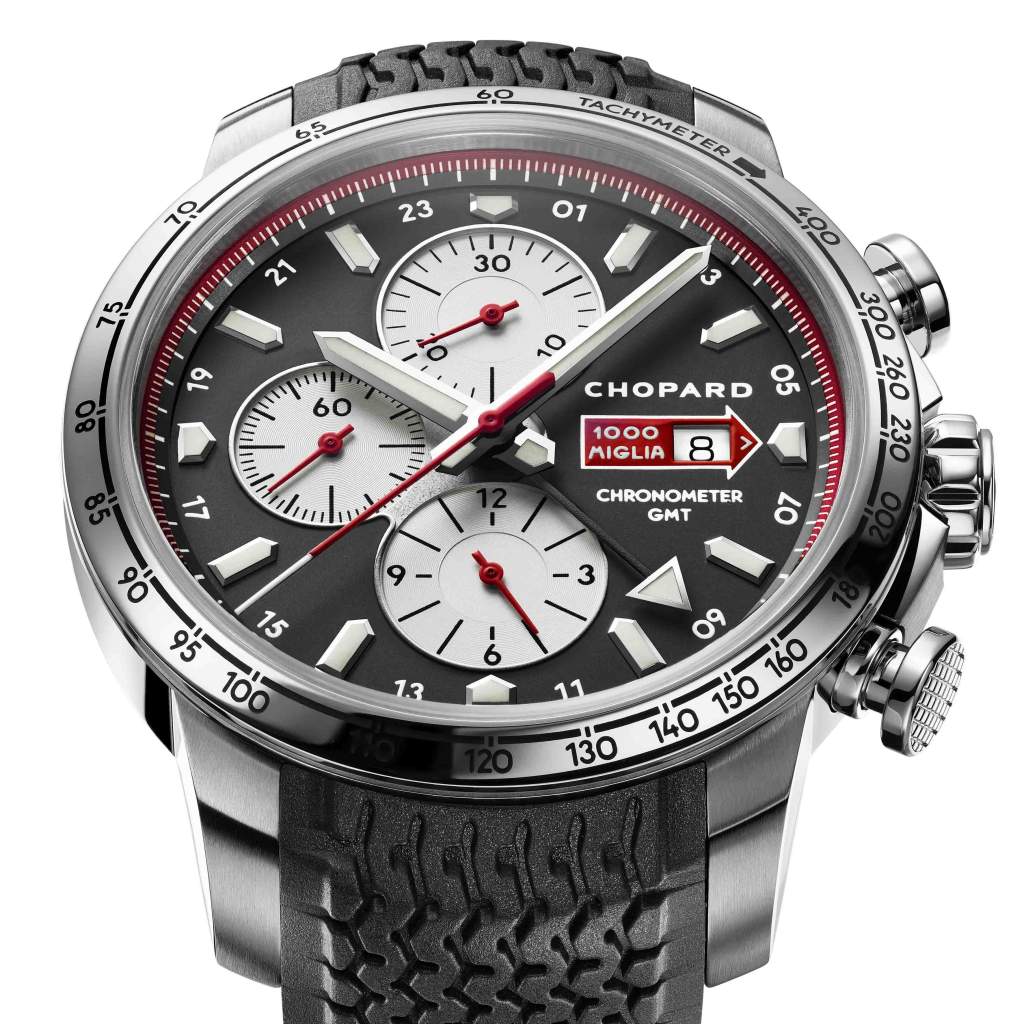 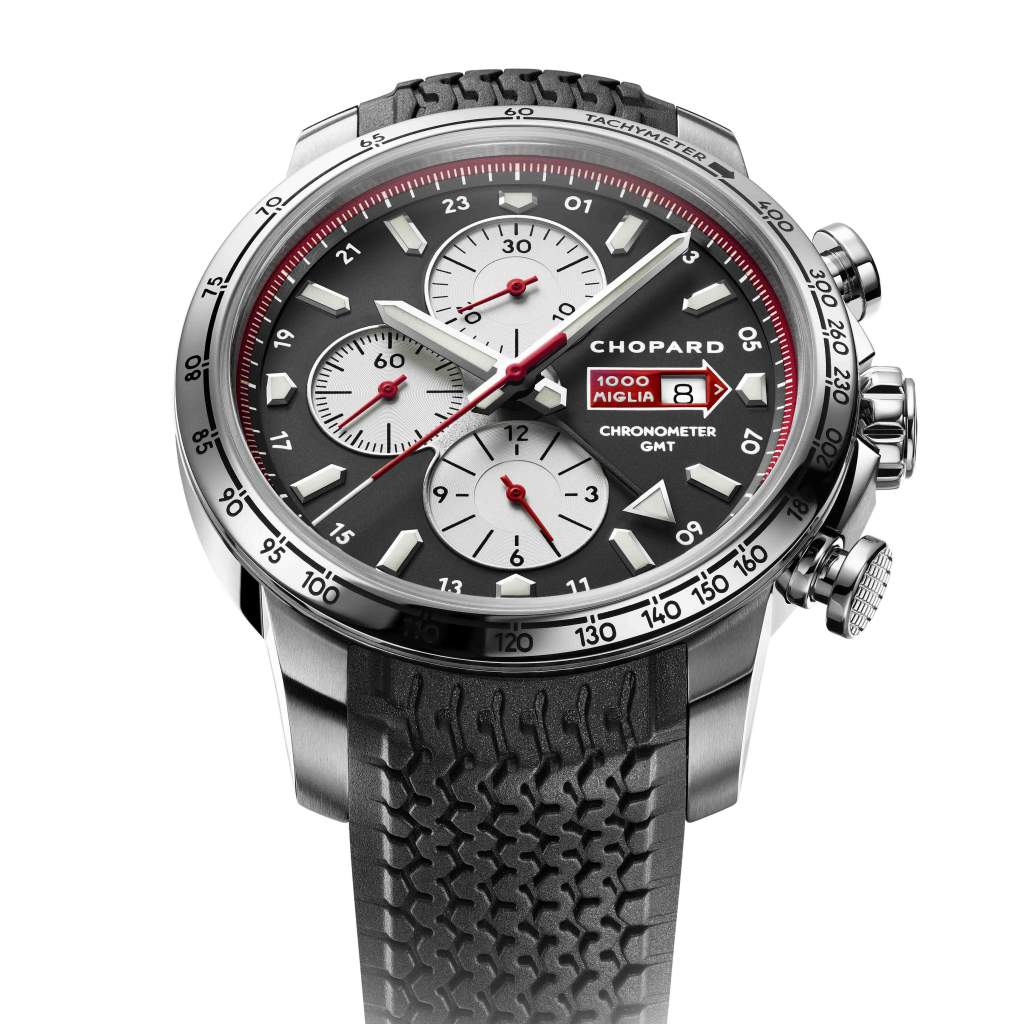 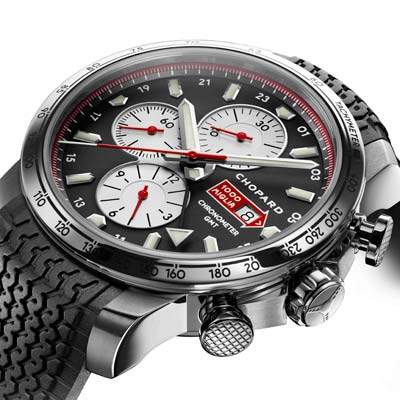 For the past 25 years, Chopard has faithfully partnered the Mille Miglia race. This constancy testifies to the close ties between the Geneva-based House and the world of motor sports. The entirely redesigned GMT chronograph celebrating the 2013 edition of “la corsa più belle del mondo” is a nod to the design of historical racing cars. Ergonomic, functional and sophisticated, the Mille Miglia 2013 is a limited edition that has racing in its genes and in its gear trains.

For Chopard, the Mille Miglia is a family adventure. Chopard’s Co-President Karl-Friedrich Scheufele is a collector of historical cars and a keen competitor in classic rallies. He enlists his own vehicles in this legendary race and drives them himself, alternatively accompanied by his wife or his good friend Jacky Ickx as co-driver. His father, Karl Scheufele III, Honorary President of Chopard, also regularly takes part in the competition. This personal connection between the brand and one of the most well-known historical car races in the world dates back to 1988. It was then that Chopard became a partner of the event, a role it has maintained ever since and to which it has since become that of official timekeeper. From May 16th to 19th 2013 and for the 25th consecutive time, Chopard will be present in and around what the organisers proudly name “the most beautiful race in the world”.
A chronograph for the race
Raced from 1927 to 1961 as a speed trial on open roads, the Mille Miglia has now become a rally. There is no longer any question of racing to and fro across Northern Italy in less than 20 hours. Instead, the event lasts three days. Nonetheless, it is not just a joy ride. The racing is competitive, the route is sinuous and the cars are every bit as powerful and capricious as one expects from such proud historical models. Only cars having taken part in the original race formula are entitled to compete. The teams can rely only on their driving skills, the indications provided in their road-book, as well as their time measuring instrument. The Mille Miglia 2013 chronograph is designed to play a key role in the race, in the same way as a car engine or a suspension system, and definitely not merely a walk-on part.

Optimal ergonomics and concern for detail
In terms of substance, this Mille Miglia 2013 is a self-winding chronograph featuring a 24-hour dual-time indication and a date display. In formal terms, it is a tribute to motor sports in general and to the race itself. Now entirely redesigned, it also testifies to the extreme concern for detail that Chopard displays in each of its timepieces. The 42.8 mm-diameter case of the Mille Miglia 2013 is topped by a generous 44 mm bezel, an ingenious association that preserves the imposing presence of the watch while making it a more comfortable fit on even the slimmest wrists. This quest for optimal ergonomics had also led to revamping the lugs that are now short and tapering so as to secure the watch more firmly to the wrist. The mushroom-shaped chronograph pushers enable smooth handling thanks to the nonslip knurled grid pattern on their surface ensuring a firm grip. Finally, the rubber strap with the 1960’s Dunlop racing-tyre motif is integrated with the case for a more flowing look and feel.

Optimal readability
The dial of the Mille Miglia 2013 chronograph focuses on readability. The red sweep seconds hand is tipped with white to make it stand out. The light grey chronograph counters make a striking contrast with the rest of the anthracite grey dial. They provide a second level of functional read-off, detached from the rest of the dial and its information. The tachometric scale appears on the bezel, while the dual-time reading is positioned on the dial between the hour-markers. Another distinctive feature is the date that is now shown in the red arrow that has become the race logo, inherited from the signposts that enabled competitors to find their way from Brescia to Rome and back.  This shape is also echoed on the hour-markers, which, along with the hands are enhanced with Superluminova to ensure the watch can be read at night inside a classic Maserati or Porsche.
The colour symbolising Italy’s passion for automobiles is the chromatic theme of the Mille Miglia 2013 chronograph. This vibrant red shade frames the inner bezel ring, surrounds the counters and adorns the chronograph hands. The inimitable colour of racing, of adrenalin and of Italian gentlemen drivers, it sums up the warmth and depth of the close ties binding Chopard to the world of motor sports.