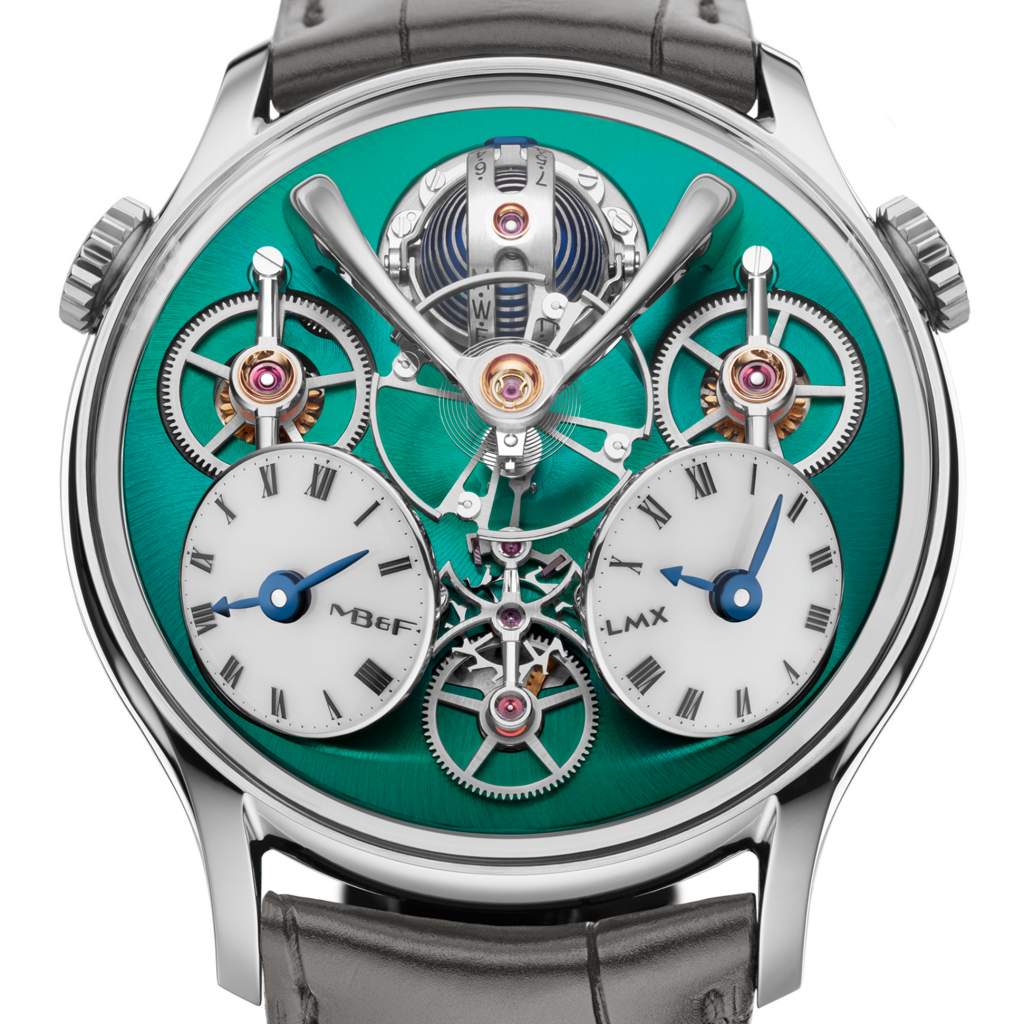 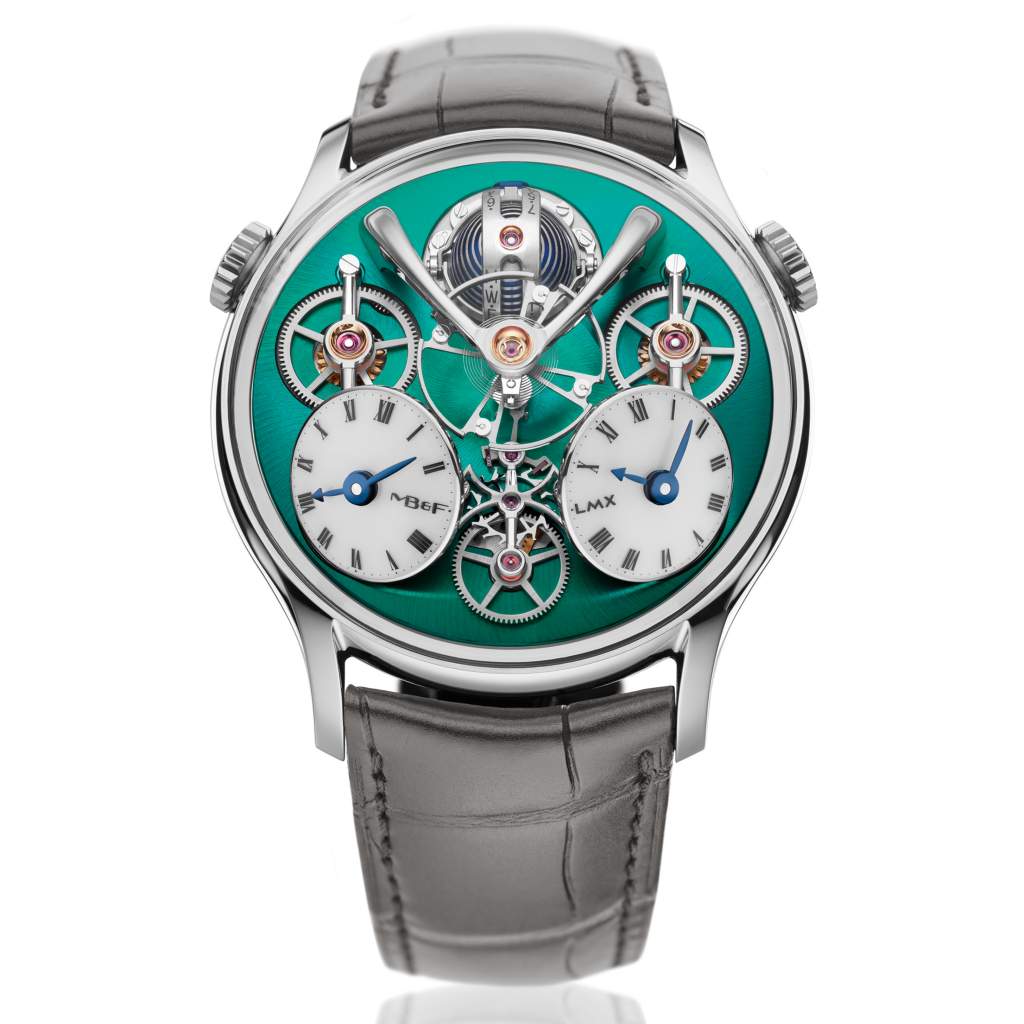 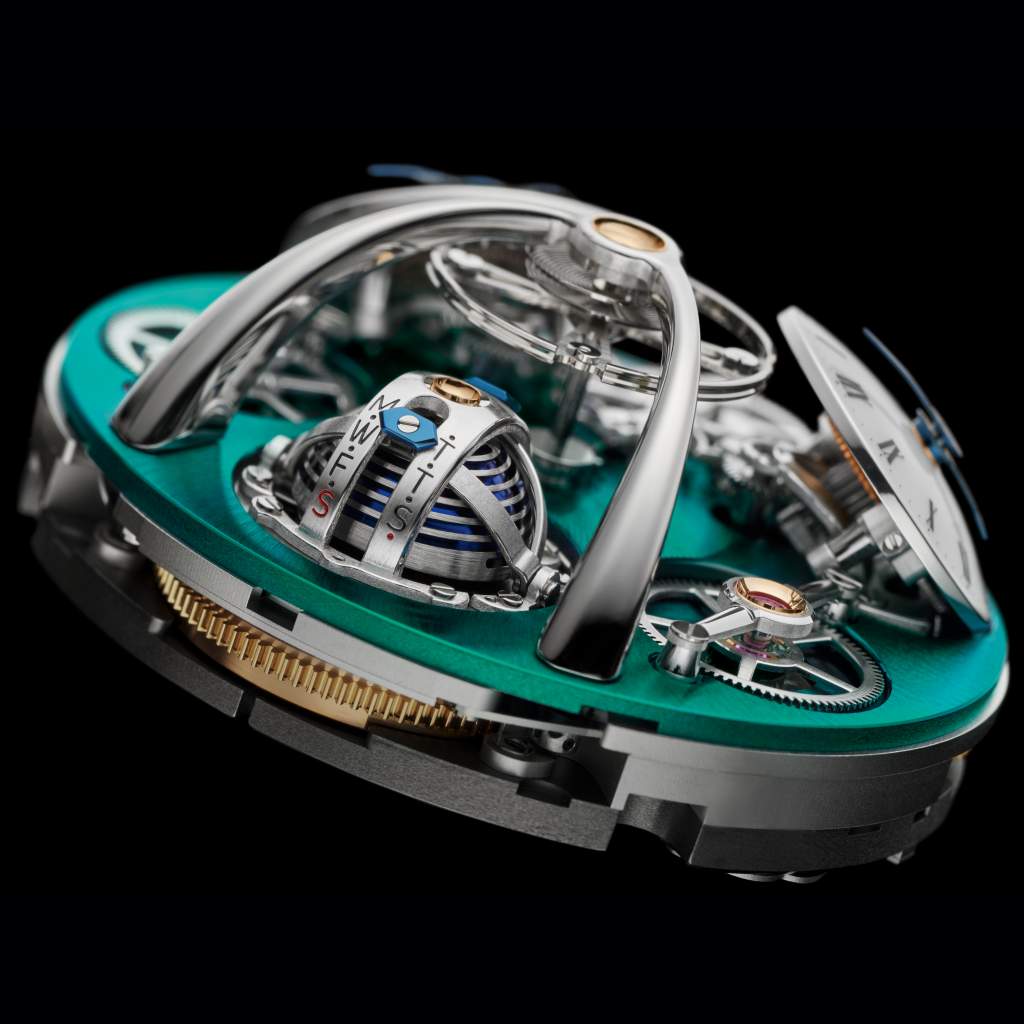 Back in October 2011, MB&F had just launched Legacy Machine No.1, the first creation of a new collection, alongside the existing Horological Machines. LMX returns to the earliest encounter with the Legacy Machine collection, utilising the same expression comprising a central flying balance wheel and two dials... although everything else is different.

Those familiar with MB&F’s very first Legacy Machine will instinctively know how LMX operates: two dials of stretched white lacquer, each with its own display of hours and minutes. Unlike the first Legacy Machines however, both dials are tilted at an angle – a more complex feature, requiring the transfer of energy from horizontal to vertical planes thanks to conical gears.

While the first few Legacy Machines took a selective approach to what was showcased between dial plate and sapphire crystal dome, later models such as the LM Perpetual were more open and demonstrative about their mechanical prowess. LMX follows this latter approach, revealing functional elements such as the battle-axe-shaped escapement bridge and gear-train components. Three large wheels are particularly visible: placed next to each winding crown, two are set in motion when setting the time on the corresponding time display, while the gear at 6 o’clock is the common seconds’ wheel.

Of particular note is the new bespoke balance wheel, a 13.4mm behemoth with inertia blocks that marks a departure from the more traditional screwed balances and offers greater accuracy to the watchmaker in regulating the heart of LMX. Other refinements include the polished arms of the straight bridges exposed on the dial plate, manually finished to impart a curved, or bercé, profile on their upper surfaces.

In another nod to the world-first vertical power reserve indicator of Legacy Machine No.1, LMX builds on this slice of MB&F history, with a completely novel three-dimensional display that showcases the engine’s impressive seven days (168 hours) of power reserve. In this evolved display, there is the option to select between two modes of counting down the power reserve. Two markers are positioned on opposite sides of a hemisphere; one framed by an arched scale numbered 1 to 7, another with a scale showing the days of the week.

This complex and completely novel interplay of components is given an additional level of intricacy, by the rotation of the entire power-reserve display itself. This allows wearers to choose their preferred mode of power-reserve indication: by continuing to wind the battle-axe crown even after the power reserve is fully replenished, wearers can adjust the orientation of the indication in order to make the day-of-the-week or numeric scale more visible when LMX is on the wrist.

Like a perfectly balanced X, the engine of LMX is deeply symmetrical – not only dial-side but also as observed through the sapphire case back, revealing the three barrels placed evenly around the centre, accentuated by the sunray pattern of the Côtes de Genève finishing. A treat for those who can read the language of watch movements, who can discern expert intent and refined purpose behind the placement of each component.