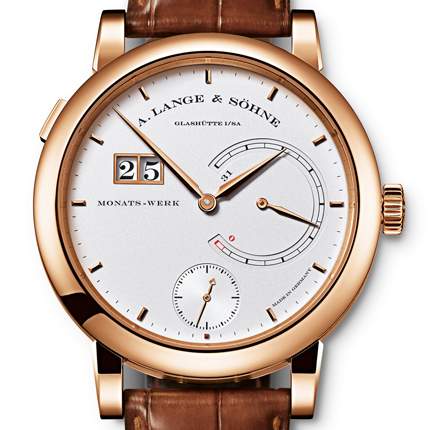 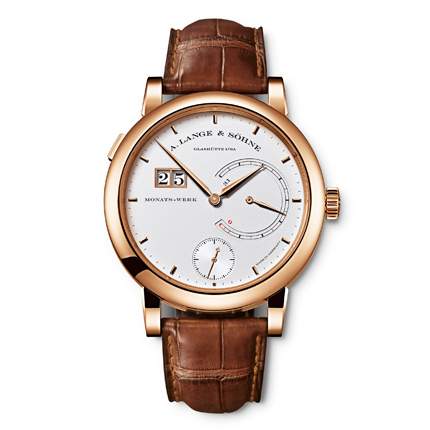 No other watch runs longer: The new manually wound A. Lange & Söhne timepiece has a power reserve of one month. That is why it has been named the LANGE 31. Another innovation, a constant-force escapement, assures that power delivery is uniform throughout the entire 31-day period. Additionally, Lange reintroduces the venerable key winding mechanism.

People have always been fascinated by the waxing and waning of the moon. So much so, in fact, that already the oldest calendars used the span between two new moons as their basic unit of time. The construction of a mechanical wristwatch with a power reserve of a whole calendar month, not to mention constant rate accuracy across the entire period, was one of the few as yet unmastered horological feats. Now, it is reality: the LANGE 31. A programmatic designation for a power pack with the so far unimagin-able power reserve of 31 days – plus continuous rate stability. With it, the horological year is now subdivided into 12 “winding sessions”.

To store this amount of energy, the LANGE 31 features two stacked mainspring barrels with an inside diameter of 25 millimetres. The prominent twin barrels occupy three quarters of the movement's footprint. Each measuring 1,850 millimetres in length, the two mainsprings are five to ten times longer than those found in conventional wristwatch movements. Their combined energy is enough to lift a 100-gram bar of Swiss chocolate 320 centimetres – more than 10 feet. It would be quite a cumbersome task to wind strong springs like these with the delicate components of an ordinary winding crown train. That is why Lange's engineers turned to the “key technol¬ogy” of historic pocket watches. The leverage delivered by a key makes it possible to choose a transmission ratio that would be inconceivable with a crown. A square key, inserted through an aperture in the sapphire-crystal caseback, delivers the energy to the spring barrels. The key features a built-in backstop ratchet to allow smooth winding as with a regular crown, and a torque limiter prevents accidental overtightening of the springs.

Uniform energy delivery for the escapement

It stands to reason that a movement with such an extraordinary power reserve cannot constantly run at a stable rate without special technical precautions. The laws of physics dictate that in the process of relaxing, a spring loses more and more of its initial torque and thus cannot deliver the same amount of energy between the points where it is fully wound and fully unwound. As its torque wanes, the amplitude of the balance declines and so does the rate accuracy of the movement. To outwit this law, Leonardo da Vinci invented the fusée principle 500 years ago. It allows the spring's loss of torque to be largely offset by leverage. In the form of a fusée-and-chain transmission, this principle has been embodied in two of Lange's new-era watches: the TOURBILLON “Pour le Mérite“ and the TOURBOGRAPH “Pour le Mérite“. But to handle a power reserve of 31 days, this construction would have been made impossible by the sheer size of its parts. So Lange's engineers sought – and found – a different solution: the constant-force escapement. It is based on an auxiliary spring that is periodically rewound by the mainspring and always builds up the same torque, regardless of the state of wind of the mainspring.

As it relaxes, this pretensioned so-called remontoir spring on the fourth-wheel arbor always delivers the same amount of energy to the escape wheel. Every ten seconds, this spring, attached to a stud, is retensioned by 60 degrees at its outer end. To complete the mechanism, it is also necessary to integrate a device that dependably and accurately controls this motion sequence. This task is handled by the balance. It not only assures the uniform rotation of the fourth-wheel arbor that indicates the correct time but also controls the cyclical winding of the constant-force escapement. This is done with a Reuleaux polygon, a cam shaped like an equilateral triangle with convex sides. It is attached to the fourth-wheel arbor. Every ten seconds, in other words after every 60-degree rotation, it moves an ingeniously designed pivoting lever. Two pallets on the inside of the lever alternately engage with a one-toothed wheel that is connected to the spring barrel via a wheel train and briefly stops its motion after every 180-degree rotation. Each time it turns, the remontoir spring is incrementally rewound within fractions of a second and during the following ten seconds, it delivers its energy to the escape wheel. Within these ten seconds, the torque curve fluctuates marginally, but on average, a constant amount of energy is delivered for the full 31-day period. The motion sequence of the constant-force escapement, which indeed resembles a classic escapement, can be observed through the sapphire-crystal caseback. A transparent sapphire jewel reveals the fascinating interaction of the three-point cam with the pivoting lever.

On the bottom line, the constant-force escapement prevents the waning torque provided by the mainspring barrel from diminishing the rate accuracy of the watch. The result: uniform energy delivery, constant amplitude, same rate accuracy from the first to the thirty-first day on which a shutoff mechanism halts the movement. Theoretically, the movement could continue to run. But then, the force generated by the mainspring would drop below the torque needed to wind the remontoir spring. The constant-force escapement would no longer function reliably.