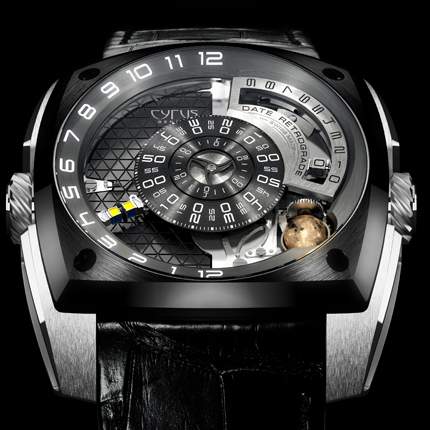 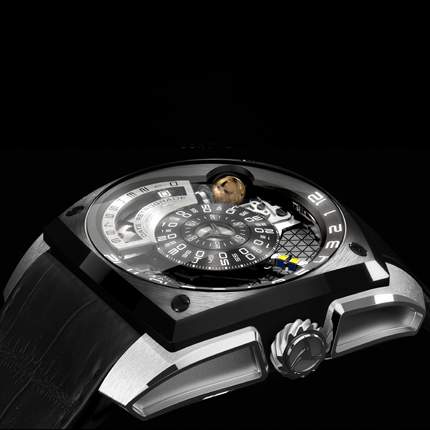 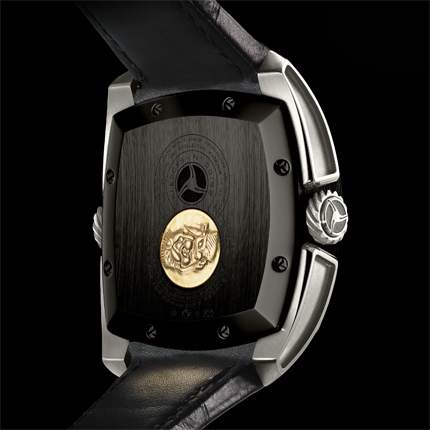 The case design arouses in us the enthusiasm for CYRUS's men and their emotions as they saw the walls of Babylon in the distance. Mighty, inaccessible, proud, and characteristic among thousands. Only Babylon can resemble BABYLON. The watch sums up this notion with its design and selection of the highest quality materials. An imposing case with a diameter of 48mm (including the crowns) boasts four walls in the shape of horns with high quality finish, and encompasses the main watch mechanism. The slanting lugs for a black crocodile leather band fit the wrist perfectly. The watch with a 18-carat red gold or 18-carat grey gold case combined with Grade 5 titanium with a DLC (Diamond Like Carbon) finish is available only in a limited series. The visible screws remind one of the three-part CYRUS brand logo and represent the " locks " of the walls of BABYLON, which hide uncounted treasures waiting to be discovered.

The heart of the city – like the heart of the watch – contains a new and incredible wealth which is certain to amaze you. The mechanism provides three exceptional functions.

Imagine time as a line. The retrograde hand moves along the 180° axis and changes colour (while rotating the 180 degrees) depending on the time of day (day or night). Regardless of the hand's position, the minute and second discs are always aligned and accurate during the linear reading of time. This patented alignment is based on a one-of-a-kind mechanism which controls the speed of the (retrograde and rotating) hour, minute, and second wheels.

Finally, the tribute to the renowned Tower of Babel, the building " with its top in the heavens ", should be mentioned: a full moon with realistic crater images which links the watch to the sky. The lunar phases are represented by a black patch which gradually covers the full moon. When the moon is fully covered, the three-section CYRUS brand logo becomes visible. Time eventually conquers the waning moon.