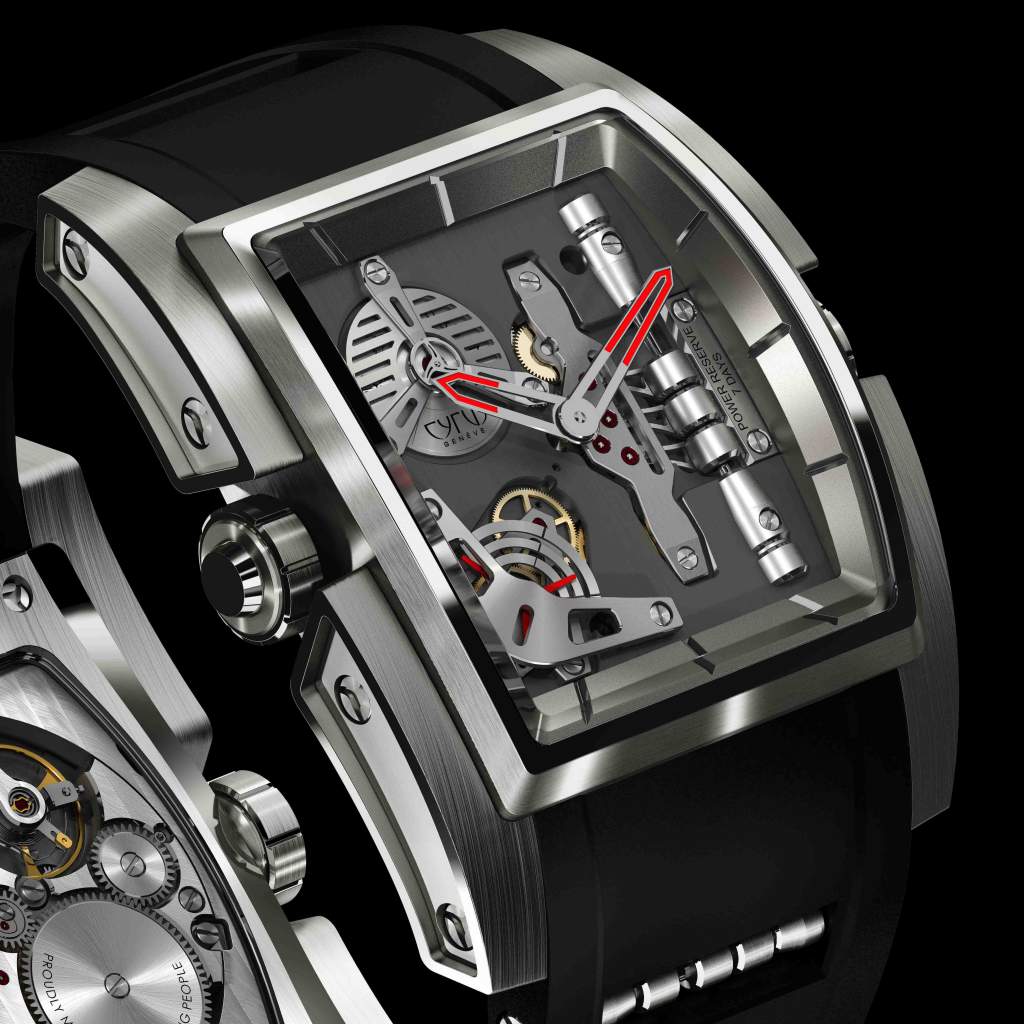 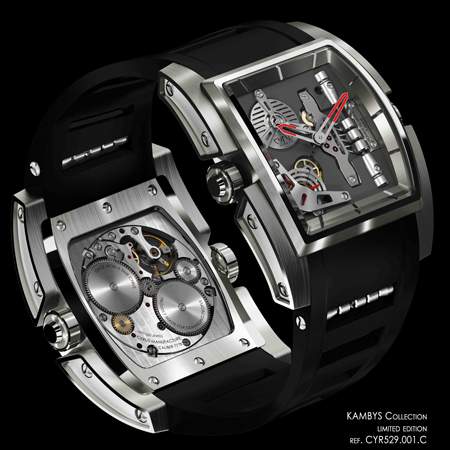 Because CYRUS relies only on the intuition of its founders,
Because CYRUS does not try to ‘be like ‘others’,
Because CYRUS has a unique history,
And simply because no great genius has ever existed without a touch of folly.

This is how the KAMBYS collection was born.

In a market dominated by automatic watches, CYRUS has dared to launch a timepiece with manual double barrel winding and a seven-day power reserve. The movement (290 components, 50 rubies) is a 100% in-house manufacture movement, created under the aegis of renowned, award-winning Swiss watchmaker Jean-François Mojon.

The design of this timepiece (available in titanium and black /red gold DLC titanium) was developed in perfect synergy with the brand’s identity, which places great emphasis on attention to detail. Recognizable as a CYRUS from first glance, it has a sleek design, where each element has been carefully weighed up and designed by our in-house team. A patented design, which perfectly moulds the shape of the wrist.

This collection is the fruit of the partnership between our two founders, Julien and Laurent LECAMP. The selection of functions, the manual movement, the design features and the unusual bracelet were all created and developed within the family, with the utmost respect for the CYRUS philosophy. The distinctive mark of the two cousins can be found discreetly inscribed on the back of the calibre. Four digits, 7778 are etched, recalling the cousins’ two birth dates.
Highlighting the classic character of this new timepiece, CYRUS offers elegant functions (hours, minutes, seconds, power reserve) and a unique, secret animation, all brought to life by a spectacular movement which is fully visible through the transparent sapphire crystal case.

At first glance it catches your eye, the power reserve (between 2 and 4 o’clock) will captivate you with its three barrels sliding progressively along a vertical axis as the seven days unfold...Each barrel has a power reserve of two days, apart from the final barrel (three days).
The seconds function is truly original and technically advanced, with its three angled hands, each of which counts 20 seconds before passing the baton to the next hand.

Then there is the secret animation (between 9 and 12 o’clock), which is activated by simply pressing the crown at 9 o’clock. The text ‘limited edition’ then appears. Press it again, and the Cyrus coin (the first coin in the history of humanity, produced under the reign of CYRUS THE GREAT) appears to replace the previous inscription. Press one last time and...give flight to your imagination. The CYRUS logo appears, but if you so desire, we can personalize this animation according to your wishes.

The design of the bracelet has also been carefully thought out. A perfect continuation of the curve of the timepiece, the bracelet also has at its centre an opening, at the heart of which there are three barrels in a mechanism which recalls the ‘abacus’ design of the power reserve.
One question remains. Why did we call this collection ‘KAMBYS’?
CAMBYSES was the name of CYRUS THE GREAT’s son and successor.
Since each of our collections is linked to the history of CYRUS (the ‘KUROS’ collection takes its name from the Greek for CYRUS, for example), it seemed obvious that we should create a collection which paid homage to CYRUS THE GREAT’s son, adapting his name slightly so that it starts with a ‘K’ – the letter with which the names of all three of our collections begin. ‘K’ for ‘KING’, naturally.

You may wonder about the number 3: it is an underlying theme in all of our designs. If you would like to know why (of course this is no coincidence), please contact the CYRUS team, who will pass on the secret…