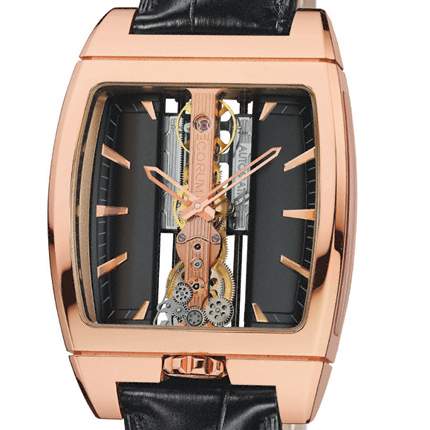 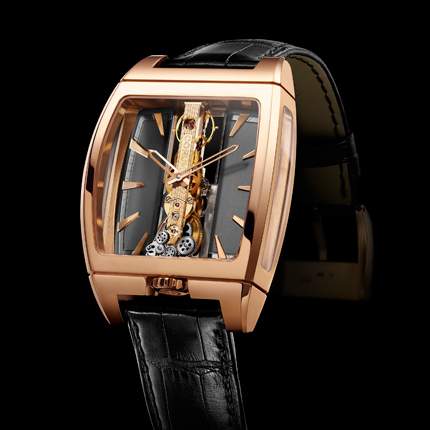 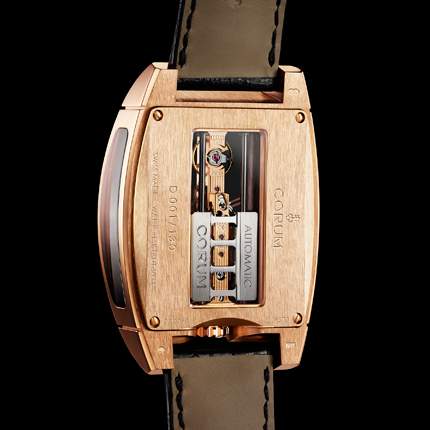 A new era for the legendary Golden Bridge

The mechanical Golden Bridge movement made a strong impact right from the time of its first presentation in 1980. Over 30 years ago, this exceptional baguette movement with its innovative construction wrote a new chapter in the history of watchmaking. Introduced in 2011 for the very first time is an automatic version – with linear winding – it heralds a new era in the legend of this unique movement. This world première of the automatic variation is presented in a red or white gold case and will be produced in limited quantities.

Few mechanical movements have had such a significant impact on horological history. The legendary Golden Bridge, first presented by Corum in 1980, has since then revealed the full measure of its powerful and enduring appeal. This impressive baguette movement, built in a straight line and calling for exceptional watchmaking expertise, has adorned some of the most fabulous timepieces by the brand from La Chaux-de-Fonds. In 2009, the Golden Bridge baguette inspired the creation of the sophisticated and contemporary Ti-Bridge model, while 2010 saw the arrival of the first Golden Bridge tourbillon movement. In 2011, this amazing lineage is definitely entering a new era with the arrival of the self-winding Golden Bridge movement equipped with a linear oscillating weight.

The exclusive new Corum Caliber C0313, an automatic linear-winding baguette movement, called for over four years of development and laboratory testing to verify the materials, the frictional forces and the physics of the winding mechanism. Equipped with a linear oscillating weight made in platinum and visible from both sides of the case, along with a slipping spring mechanism, this Golden Bridge movement beats at a frequency of 4 Hz (28,800 vibrations per hour) and is endowed with a 40-hour power reserve. This 194-part caliber is also fitted with a variable-inertia balance – guaranteeing long-term precision – as well as a barrel that is miniaturized so as not to break the smooth vertical lines of the mechanism. The mainplate and bridges are made from 18kt gold (matching the gold of each of the cases) and adorned with a new vertical guilloché motif matching the linear design of the oscillating weight and accentuating the powerful character of this in-line movement.

The complexity of such a movement – Caliber CO313 is one of the rare movements with linear oscillating weight on the market – lies first and foremost in resolving the inertia issues inherent to any movement of this type. Hence the use of a precious and dense metal, in this instance platinum, for this linear oscillating weight weighing 4 grams and which swings 1 cm, before its motion is slowed down or “damped” by a system of gaskets that send it swinging back in the other direction, thereby supplying the movement with all the energy it needs to continue moving.

The principle governing the development of CORUM Caliber CO313 was to offer a floating, linear oscillating weight floating on rails. The latter are made in steel with a PTFE Teflon coating, while the contact zones between the chariot and the rails are made from beryllium copper. This association of materials ensures optimal performance. The energy derived from the winding is transmitted via a rack fixed to the oscillating weight and constantly engaged with a reverser system – ensuring unidirectional winding – equipped with ceramic ball bearings and requiring no lubrication.

To accommodate this exceptional caliber, the new Golden Bridge Automatic has a new tonneau-shaped case in red or white gold which, at 37.2 x 51.8 mm, is larger than its predecessors and slightly curved to ensure optimal comfort on the wrist. It features alternating polished and satin-brushed surfaces, and provides superb views of the Golden Bridge self-winding movement – not only from both dial and case-back, but also from each of the sides. No less than four antiglare sapphire crystals are thus required to make a case that looks very much like a showcase housing a precious object. The two-part dial in black or white, depending on the version, conceals nothing of the fabulous mechanism and enables observers to admire the linear oscillating weight in motion.

Fitted with a crocodile leather strap fastened by a gold buckle, the new Corum Golden Bridge Automatic will be issued in limited production runs in 2011, comprising 130 in red gold and 70 in white gold. This exclusive approach reflects the exceptional nature of the first ever automatic Golden Bridge movement.