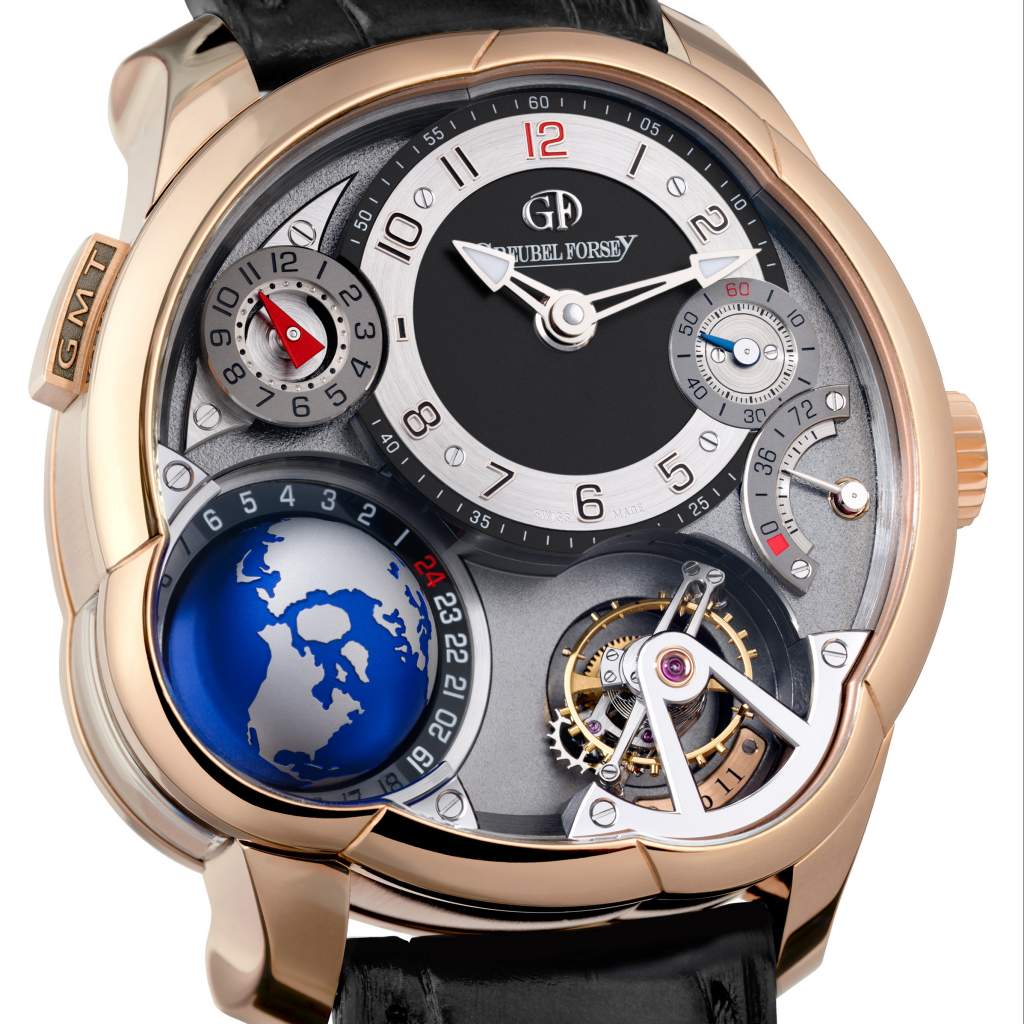 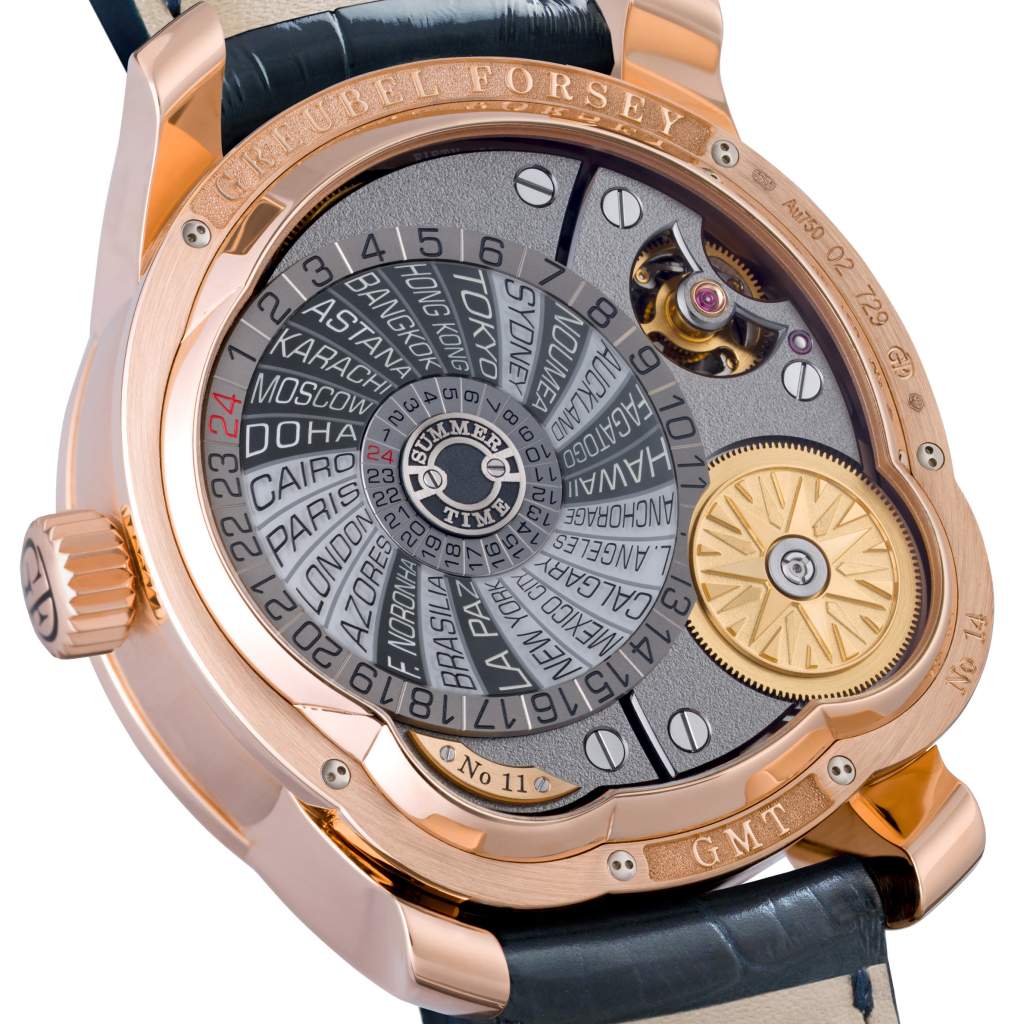 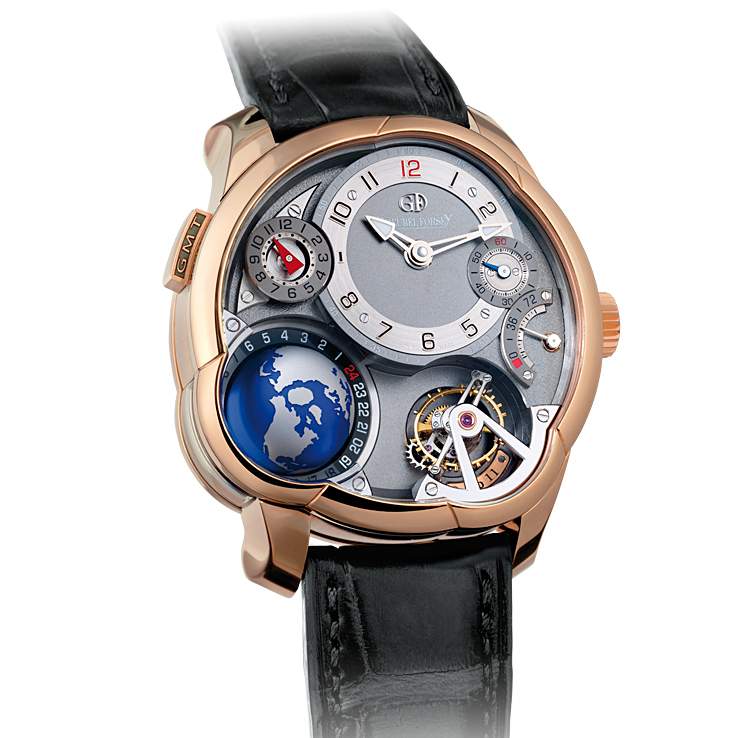 For Robert Greubel and Stephen Forsey, the impact was beyond expectations when they first presented the GMT, featuring an innovative display of universal time and three-dimensional architecture in 2011. Even before its presentation to the general public, the inventor watchmakers had already visualised the evolution of the timepiece and revealed at launch that a 5N red gold model would be presented in 2013.

In an aesthetic act of perfect harmonisation, the plates and bridge have undergone a galvanic treatment and now boast an anthracite colour to match that of the main hours and minute dial at 1 o’clock. The grained finish of the plate and bridges sets off the multi-level architecture of this timepiece perfectly.

The spectacular titanium globe at 8 o’clock indicates universal time while the Tourbillon 24 Seconds is fully visible at 5 o’clock. A second time zone indicator at 11 o'clock, small seconds at 2 o’clock and power reserve at 3 o'clock complete the dial side indications.

The three-dimensional terrestrial globe, a technical and poetic marvel, makes one complete revolution in 24 hours, anti-clockwise – the natural direction of the earth's rotation.

Its modelling of the northern hemisphere and much of the southern hemisphere – visible from the caseband window – affords an intuitive view of time all over the world – including day time and night time – thanks to the positioning of the continents in real time. The ‘flying’ globe is secured at just one end of its rotational axis – the South Pole.

Greuebl Forsey are renowned for superlative fine finishing throughout, right down to the smallest detail. Traditional hand finishing techniques – graining, bevelling and flat (mirror) polishing – create a beautiful demonstration of experience and knowledge in the service of excellence.

On the back of the timepiece, a rotating worldtime disc connected to the globe bears the names of 24 cities, each representing one of 24 global timezones.  Cities using summertime are on a light background and their timezone is easily read on the inner ring.

And in one more expression of the sublime harmony between the aesthetic and the technical, the sun illuminates the base of the case and indicates noon for the worldtime disc.

The movement consists of 436 components, 87 of which are used in the ultra-light tourbillon cage (just 0.36 grams). Two coaxial mainspring barrels connected in series provide a power reserve of 72 hours and the movement is equipped with a variable inertia balance beating at 21,600vph/3Hz and a Phillips terminal curve balance spring. Plates and bridges are hand-finished, frosted, spotted, bevelled, straight-grained, matt lapped and flat black polished. The dial is in 18k gold and the whole movement is housed in a 5N red gold case of 43.50mm in diameter with a height of 16.14mm. The case is completed by domed sapphire crystals for the dial-side, display-back and lateral window, all treated with antireflective coating. The timepiece is complemented by a hand-sewn black alligator leather strap with a Greubel Forsey folding clasp in 5N red gold.

As with all Greubel Forsey timepieces, the level of hand-finishing and decoration throughout the GMT in 5N red gold s without compromise. Movement components are designed with forms that bring out their beauty to maximum effect, offering myriad sublime details to be discovered and esteemed. Frosted plates, black flat polished steel and stunning hand-polished bevels with sharp internal angles (which machines cannot do as well as a highly experienced hand) bring unparalleled vivacity. Large jewels, set in polished gold chatons, and mirror-polished screws provide evidence of the extremely high quality that pervades every aspect of this timepiece.

With the Tourbillon 24 Secondes Incliné (Calibre GF01), Greubel Forsey’s third invention capitalizes upon the speed of rotation and the inclination of the regulator to minimise the influence of gravity on the regulating organ. The 25° angle and high rotation speed of the tourbillon significantly ameliorates – particularly in stable positions – the chronometric performance of single tourbillon systems. The system necessitated the development of an ultra-light tourbillon cage and inclined gear profile.