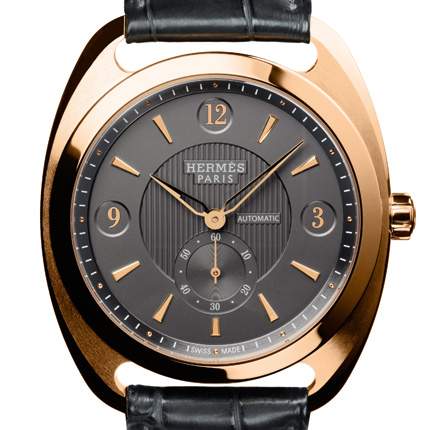 At Hermès, in 2012, time is marching on. The Dressage watch, created by Henri d'Origny, was modernised in 2003, while remaining true to its original aesthetics and becoming lighter. The dauphine hands are openworked, while the hour-markers are sandblasted appliques and the crown sits more closely next to the case. While the case retains its dimensions, the diameter is 1.5 mm wider, further revealing a dial featuring a more distinctive relief.

Today, just as when it was launched, the Dressage remains an exceptional watch, if only through its beveled barrel or “tonneau” shape. Its lugs are an integral part of the case and extend the bevels, and this exceptional design ensures that the model is perfectly curved. It is a worthy heir to a longstanding tradition in which formal research defines the new parameters of a certain sporting elegance. In this respect, it brings to mind certain chronographs from the 1930s with surprising lugs, and more generally speaking, the original aesthetics of the horns on Hermès' models.

A 175-piece Limited Edition (in reference to the 175 years of the House), in rose gold, as well as nine other models constitute this new collection.
These are equipped with the exclusive H1837 movement made for Hermès by Vaucher Manufacture and adapted so as to come in versions with a large central seconds hand and calendar at 6 o'clock, or with a small seconds hand at 6 o'clock. There are eight variations in steel (four for each movement) with a black or opaline silver dial and a choice of straps in steel or matt black or Havana alligator. Leather is selected in accordance with the noble saddle-making traditions of the House. The resulting padded and saddle-stitched straps are entirely produced in the workshops of La Montre Hermès, in Switzerland. As for the two small seconds models in rose gold, the first one, most exclusive, is available with a matt graphite dial and alligator strap, the other with an opaline silver dial and a matt Havana strap.