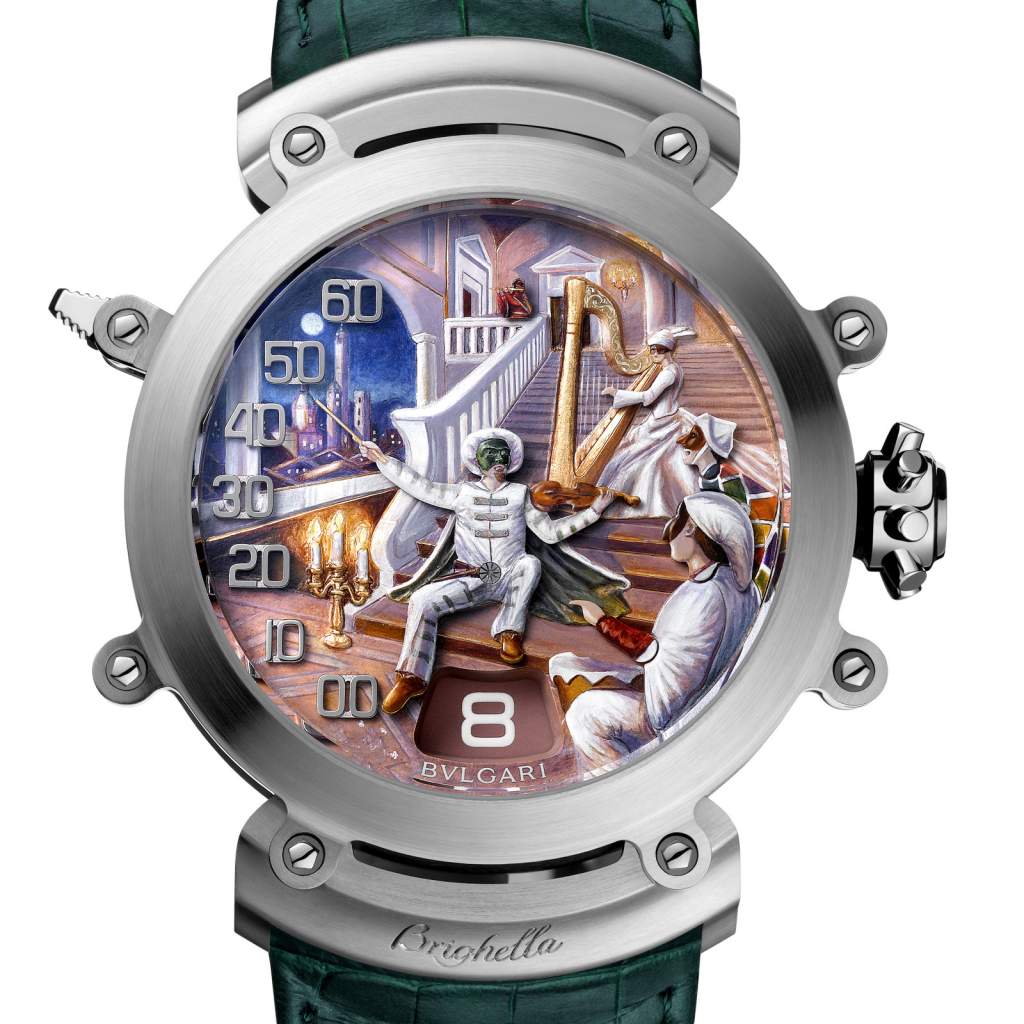 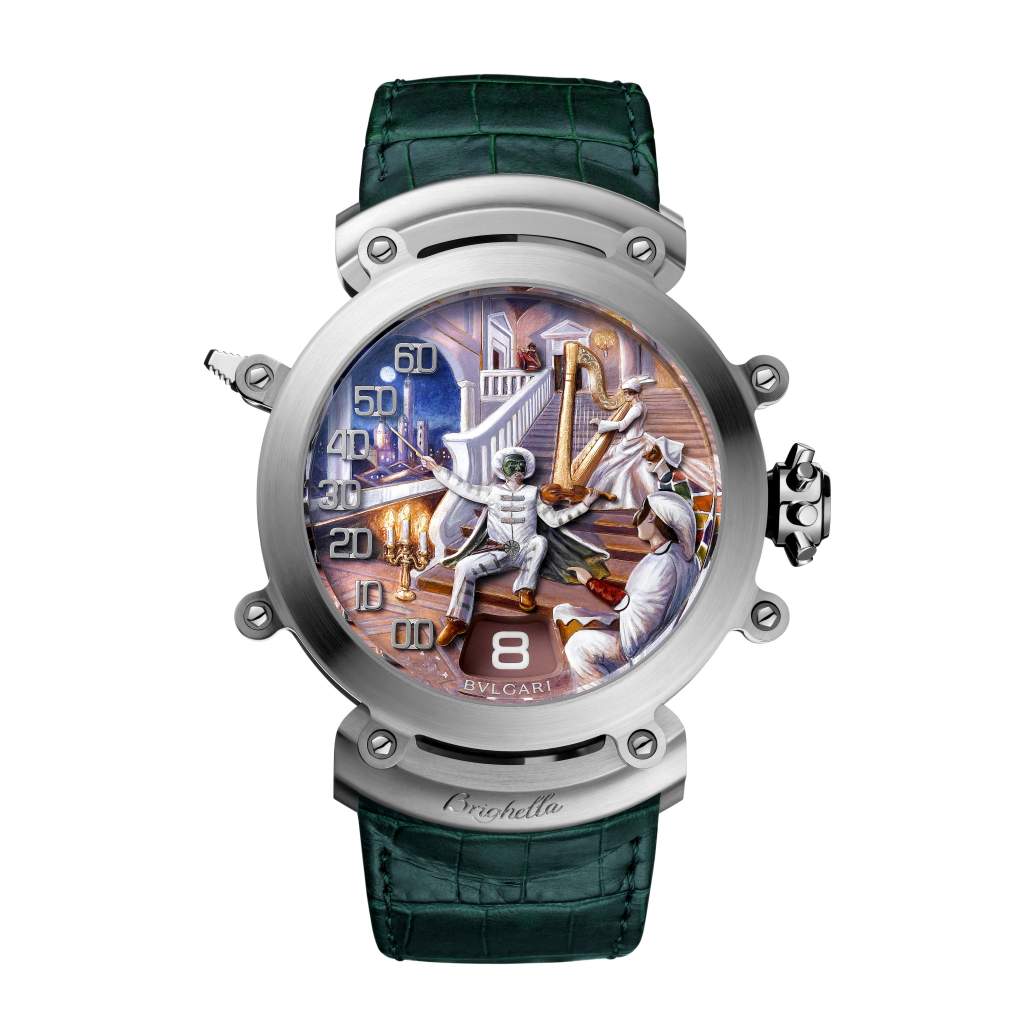 Grand complication and craftsmanship combine to give life to a creation inspired by Italy’s theatrical history of the 16th century, when gregarious masked “types” of characters performed a nomadic, outdoor form of improvisation. The three most famous and iconic characters of this tradition – Brighella, Pulcinella, and Harlequin – occupy the center of the dial. When the cathedral gong Minute Repeater is activated, these three figures come alive against a highly sophisticated backdrop, a representation of an Italian palazzo. Depending on the scene, between five and seven mobile components animate the figures.

Only a small number of fine watchmakers are capable of crafting striking watches. Bulgari is one of them. After having developed striking mechanisms with two, three and four hammers, Bulgari presents a cathedral gong Minute Repeater with two hammers for Commedia dell’Arte. The gongs are unique in that they are longer than standard gongs: the steel wire wraps around inside the case twice instead of just once. This generates a deeper sound and amplifies the resonance of the mechanism.

THE CHIME BRINGS THE CHARACTERS TO LIFE

While the Minute Repeater mechanism is already fascinating in and of itself, Commedia dell’Arte features even greater watchmaking craftsmanship by pairing the sound with animations that bring a complex scene to life on each of the three different dials. The gong mechanism chimes the hours, quarter hours and minutes on demand in different tones, animating the different figures on the dial each time. Brighella, Pulcinella and Harlequin appear on each dial executions: this organically living masterpiece stages them in a predefined choreography, like a ballet, in which they each sing and play a musical instrument.

As soon as the chime sounds, the central figure moves his or her left arm before the other four characters in turn begin moving counter clockwise, foot, arm, chest, head and so on. These multiple moving components make the scene particularly rich and vibrant, a rare feat in contemporary automata, against a backdrop of a 16th century Italian palace, with a Venetian, Neapolitan or Bolognese décor.

The mechanism of this masterpiece is obviously complex, while the dials representing the different scenes are equally exquisite. Crafted on 18k gold discs, they combine several artisanal techniques: miniature painting, engraving and chasing. The three scenes depicting three different cities – Venice, Naples and Bologna – pay a brilliant tribute to the tradition of automata, now a lost art. Their complexity is matched only by the mechanical movement that brings them to life, a Calibre BVL 618 that is entirely hand finished. In addition to the automata, it includes a cathedral gong Minute Repeater with a jumping hour display at 6 o’clock.

This ingenious mechanism is housed in a case crafted from 18k white gold and Magsonic®, a special alloy that optimizes the resonance of the piece. The minute repeater slide piece is located at10o’clock. Each of the three versions is engraved with the name of the central character on the dial: Harlequin, Pulcinella or Brighella. The Commedia dell’Arte series is a numbered, limited edition consisting of eight pieces each.

A RARE LEVEL OF COMPLEXITY

The dial of each scene inspired by the Commedia dell’Arte is a work of art in itself, with the complex execution carried out by Ateliers Vaucher in Geneva. The first step is the engraving which is carried out in a painstaking process. The craftsman shapes the components of the scene in 18k gold. The effects of relief, depth and volume are achieved by engraving and trompe l’oeil painting. Each dial has four levels that feature the central character, the appliqué side characters, the foreground décor and the background décor.

The motion of the figures is highly technical. The joints allowing the figures to move are hidden so that, for instance, the moving arms pass under the figure’s chest. The engraver uses some 15 different tools to perform this stage of the complex work, which includes giving the characters lifelike expressions. Likewise, the moving figures are affixed to the dial in an ingenious manner, with the bottom sections held in place by legs or pivots, whereas the hour-markers are suspended without touch- ing the dial between 7 o’clock and 11 o’clock.

After the patient and delicate work of the engraver comes that of the miniaturist painter, who must have both a highly developed artistic sense and a complete technical mastery of the craft. It takes three to five weeks to complete the entire scene, using a dozen basic colours. Besides the miniature size of the components of the scene which requires extreme care when painting – either directly on the gold disc or on the characters themselves – the artist must deal with the incisions made in the precious metal during the engraving process. He or she must also be able to use colour to depict alternating light, shadow and transparency, and select complementary hues for the various components.

During the process, the dial is placed in the oven for one hour at exactly 80°c between thirty and fifty times until the final result is achieved. A dial like that of Commedia dell’Arte requires extensive experience. The artist in charge of this project said that in 35 years of plying her craft, she had never worked on a piece with as many details.