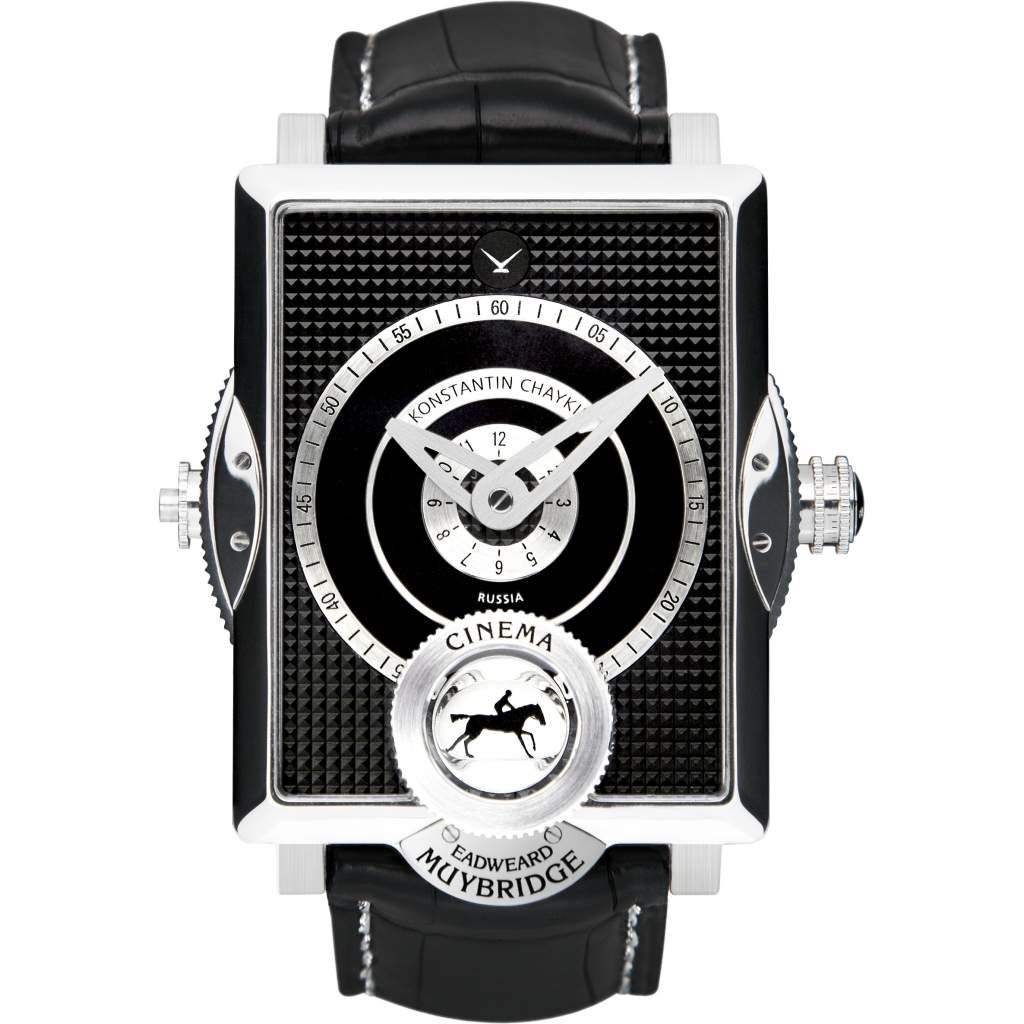 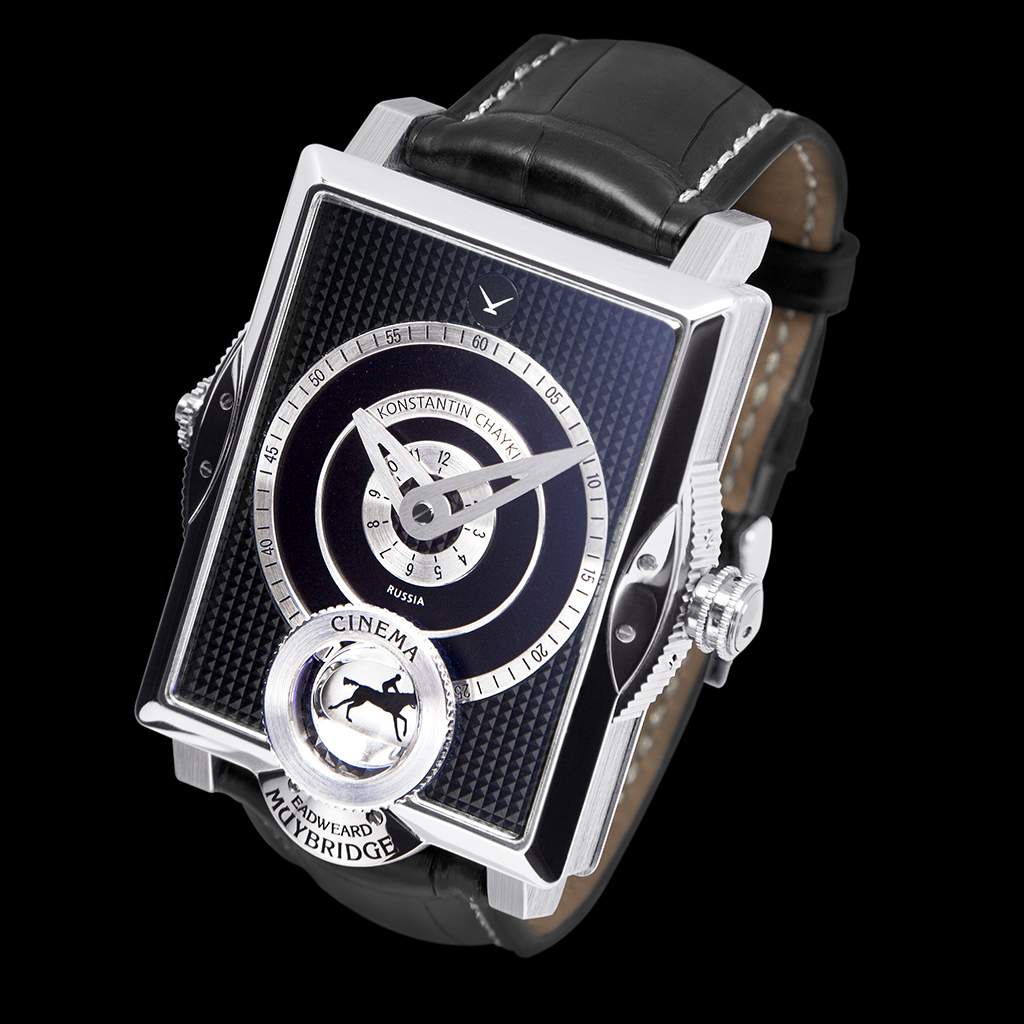 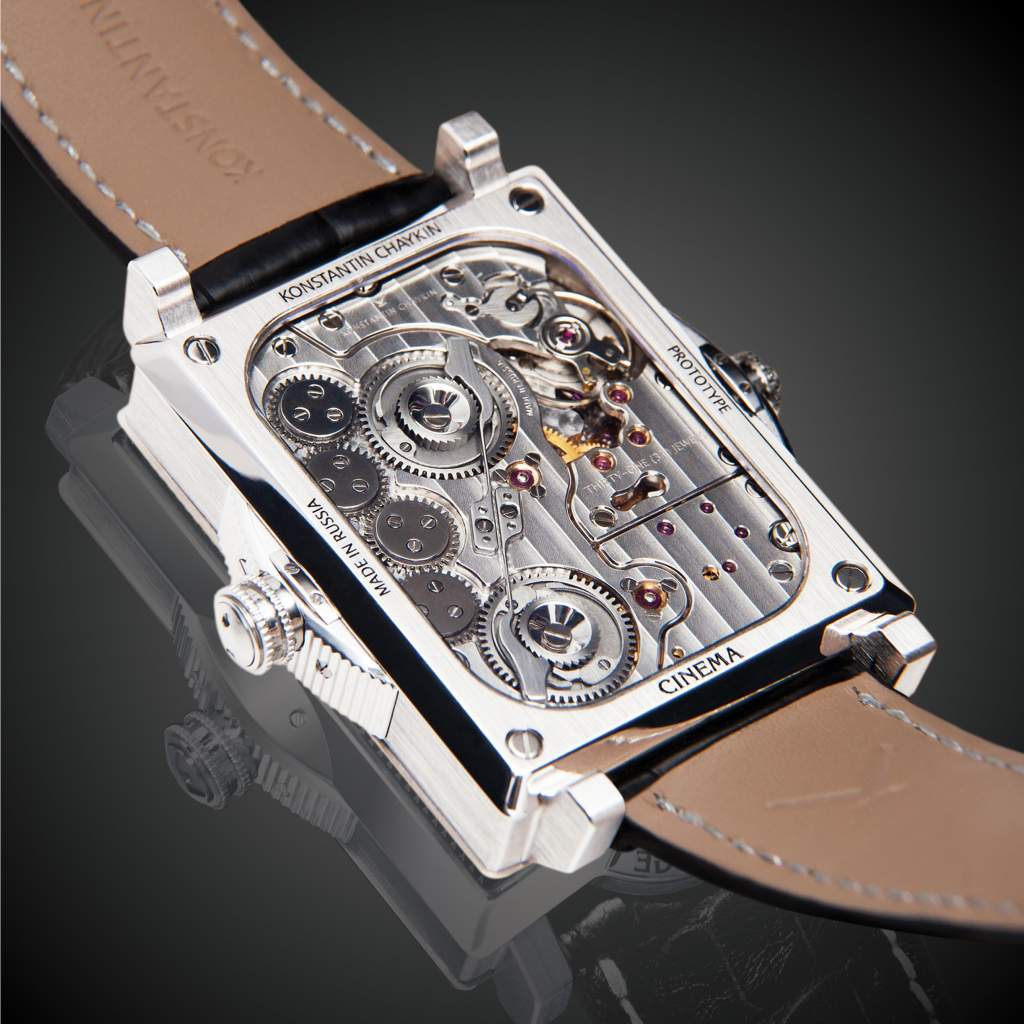 The Cinema Watch from the Konstantin Chaykin Manufacture contains two movements: the timekeeping movement proper and an animation movement based on the principles of a zoopraxiscope. The animation function is launched manually and shows a small movie of a galloping horse and rider in a small window at 6:00.

The first Cinema Watch commemorates Eadweard Muybridge, legendary photographer and inventor, considered to be one of the fathers of modern cinematography. Muybridge created the first ever series of consecutive photographs of a running horse, capturing each movement precisely. In 1879 Muybridge invented a device he named a zoopraxiscope to show these photographs in a rapid sequence which created the illusion of a moving racehorse. The zoopraxiscope was the prototype of what the brothers Lumière would name a cinématographe camera a mere 20 years later.

“Clockmakers have been making clocks with different types of animation for centuries”, says Konstantin Chaykin, Head of the Manufacture, “we have seen generations of clocks containing jacks, mechanical theatres, various automated figures controlled by the clock movements. And the world has long known movies as yet another form for viewing images. Just as movies were based on live theatre, in the same way classical clocks with jacks serve as one of the inspirations for a new branch in watchmaking – watches with a cinématographe inside. The Eadweard Muybridge Cinema Watch is my first attempt to combine watchmaking and animation. I believe that this idea has immense potential – who knows where further experiments will take us.”

The Cinema Watch is designed to resemble an antique photo- or cinema camera. The square steel case is finished using three techniques: polishing, grinding and hot pressing. The dial is designed to resemble an antique camera lens with the hour and minute chapter rings resembling aperture or f-stop rings on a camera lens. The face itself is finished in black lacquer decorated with ‘clous-de-Paris’ guilloché. The aperture housing the mini-movie of the galloping horse and rider is located at 6:00. The winding and the animation launch crowns are located opposite each other at 3:00 and 9:00 respectively. A transparent sapphire caseback reveals the unusual inner works of the Cinema Watch. Finally, a black, custom-made alligator skin wristband completes this elegant and unusual watch.

The animation movement in the Cinema Watch contains a Maltese cross stopwork which turns a disc engraved with 12 images of a galloping horse and rider in different poses. Konstantin Chaykin borrowed the concept of an obturator from cinematography: he included an obturator, a tiny shutter, to screen the animation aperture at the start of the animation cycle in order to prevent a blurry effect. During the animation cycle, the frames move at the rate of 1 per 0.07 second, as does the obturator at the beginning.

The Cinema Watch contains a bridge and movements finished in a classic style appropriate for luxury class watches: with bridges decorated with pearling and ‘clous-de-Paris’, ruby bearings set in elegant gold chatons and gold-plated gear trains. What is unusual is the presence of two winding drums: one for the watch movement, one for the animation. Both are wound using the same crown, which is turned clockwise to wind the watch, and anti-clockwise to wind the animation.