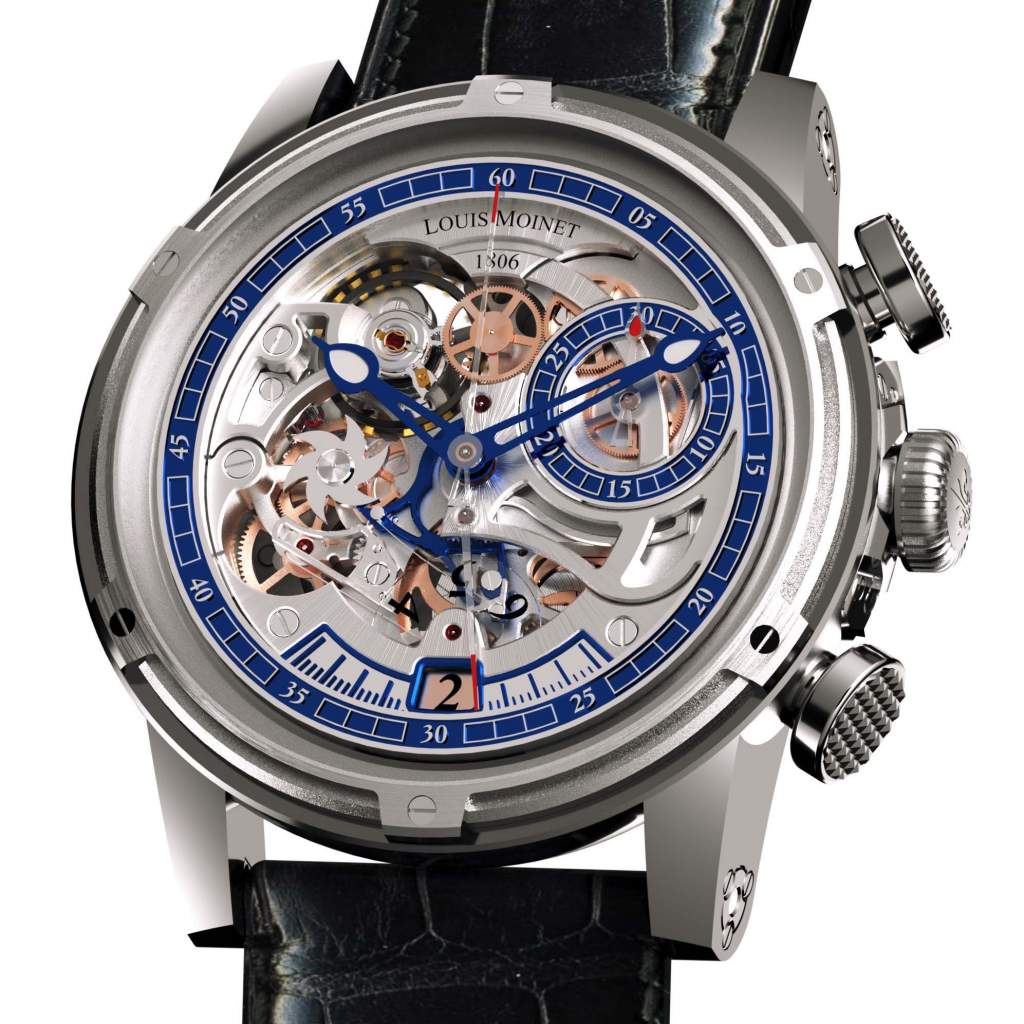 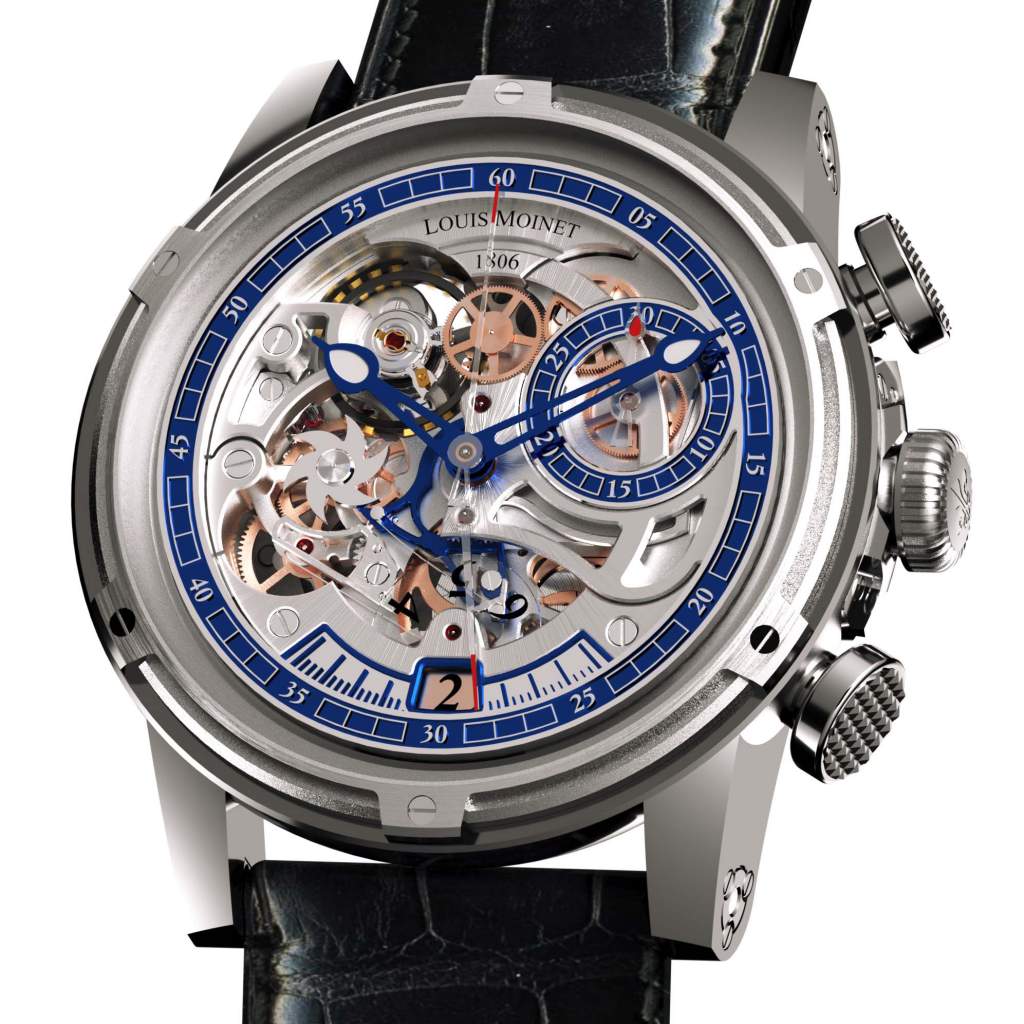 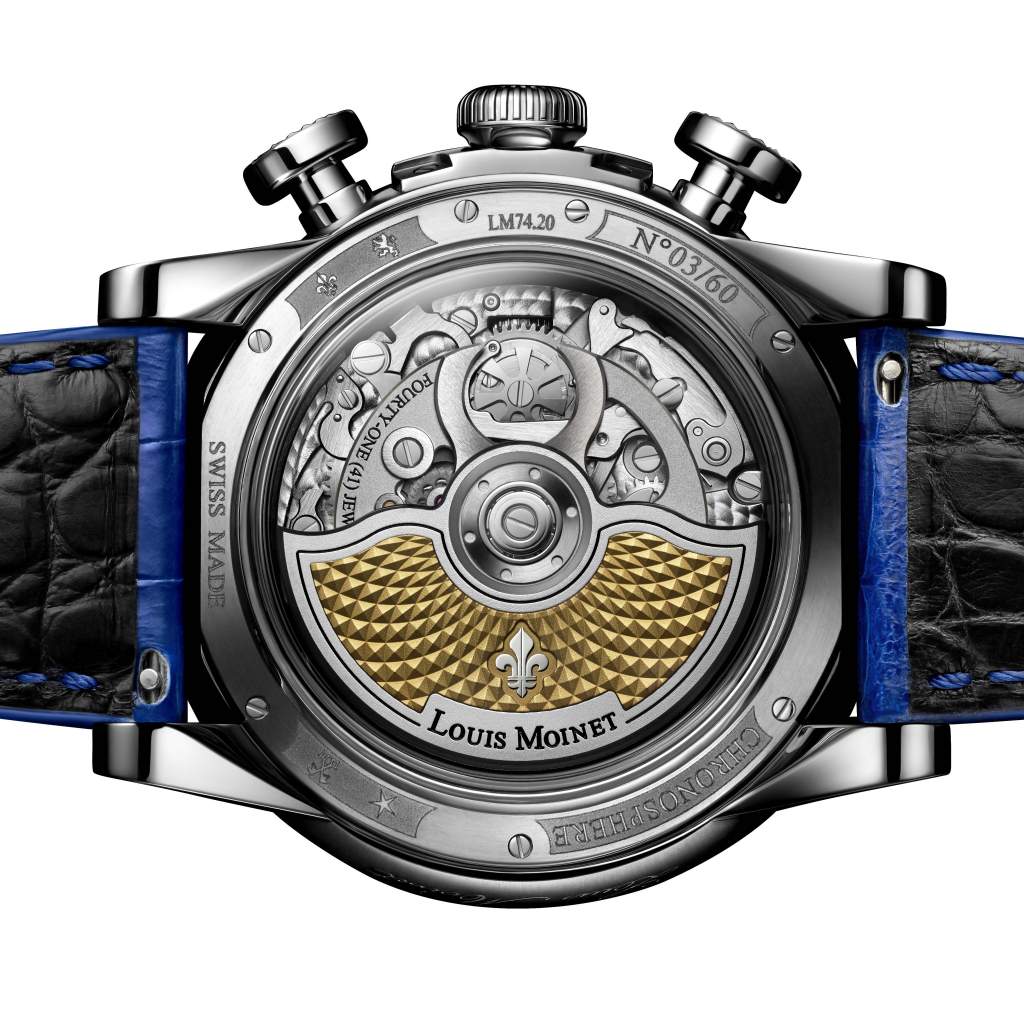 The chronograph with a retrograde system

After carrying off the Guinness World Record (2016) for the invention of the chronograph, Ateliers Louis Moinet simply had to bring out a new landmark piece. This has now been achieved with CHRONOSPHERE – the first chronograph to feature a constantly moving retrograde seconds system.

The idea was to present the chronograph complication in original, spectacular, and lively fashion: and so CHRONOSPHERE is both fun and interactive. Not only is it based on a completely new development – the only one in the world to bring together a retrograde system, totalizer, chronograph, and movement animation – it makes it all visible on the wrist.

To achieve this, a column wheel mechanism was designed, in which a new approach was taken to incorporate the retrograde complication. This involved coming up with an ingenious “starwheel slide bar” system. Made completely from titanium so as not to affect the workings of the watch, the system lies at the heart of the animation. It features a rack at 9 o’clock and a starwheel at 6 o’clock. The system is extremely precise, launching a hand along a 10-second journey (between 5 o’clock and 7 o’clock) before it snaps back to its original position to begin another cycle. It also brings to life the tens of seconds counter (from 0 to 5), whose jumping disc displays the relevant indication in the window located in the middle of this section.

The other major complication is the chronograph, as evidenced by a large central hand (60 seconds) made from composite material and decorated with a red dot. Meanwhile, the counter at 2 o’clock counts up 30-minute periods.

The heart of the movement can also be seen on the front of the watch, where the spring balance is on display, vibrating at a frequency of 4 Hertz (at 11 o’clock) – the final detail in the overall animation.

The bottom of the flange is made from titanium, adding to the lightness of the timepiece, and is covered with a high-temperature vacuum-moulded translucent material. This enables it to be through-coloured – and the transparent coating discreetly highlights the chronograph indications.

The hours and minutes hands are in Moinet blue, making it easy to read the time.

The titanium case is an original design, displaying Louis Moinet’s signature on the caseband.

The lugs are decorated with black zircon and a screwed setting. The two-part bezel is a hallmark feature of the brand, with its 6 screws fitted at a 17-degree angle. The two box-type sapphire crystals have been treated with a non-reflective coating on both faces.

Ateliers Louis Moinet was founded in Saint-Blaise, Neuchâtel, in 2004. The fully-independent firm was established to honour the memory of Louis Moinet (1768-1853): master watchmaker, inventor of the chronograph in 1816 (certified by Guinness World RecordsTM), and pioneer in the use of very high frequencies (216,000 vibrations per hour). Louis Moinet was a watchmaker, scholar, painter, sculptor, and teacher at the School of Fine Arts – as well as the author of the Traité d’Horlogerie, a watchmaking treatise published in 1848 that remained a definitive work of reference for a century. Today, Ateliers Louis Moinet is perpetuating this legacy. The firm’s timepieces, produced in limited editions only, have won some of the most coveted honours, including a UNESCO Award of Merit, five Red Dot Design awards (including one Best of the Best award), gold and bronze medals in the Chronometry Competition, eight Good Design awards, three Middle East Watch of the Year awards, two Robb Report “Best of the Best” awards, a German Design award, a Moscow Grand Prix award, and a “Chronograph of the year” distinction from Begin Magazine, Japan. Louis Moinet creations often make use of unusual materials, such as fossils and meteorites, combined with bespoke fine watchmaking complications in a unique creative approach. The brand’s core values are creativity, exclusivity, art and design.