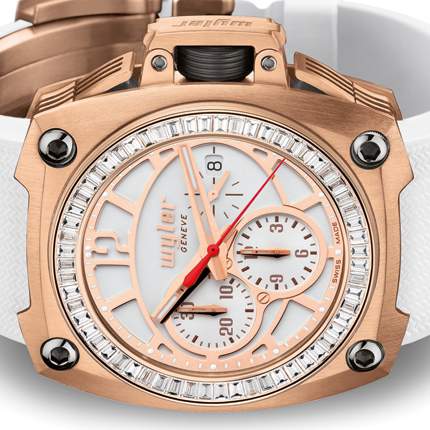 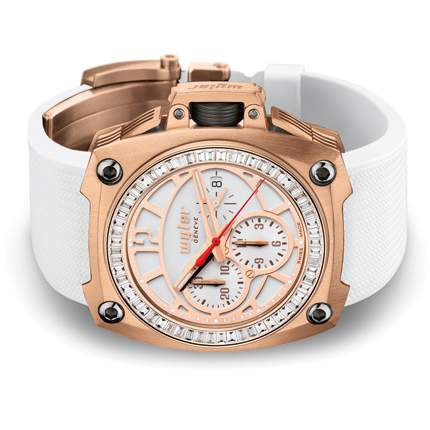 For the new Wyler Genève Code-S collection, the brand's familiar tonneau case has been reduced in size and its lines have been rounded. It uses the same sandwich construction as its bigger brother, the Code-R, with two metal plates fixed to a composite case middle by means of four polished titanium screws. All models feature Wyler Genève's patented crown protector, which must be opened on both sides (using the sliding pins) in order to manipulate the tyre-like rubber-coated crown. Distinctive concave chronograph pushers resembling a car's foot pedals blend harmoniously into the case, with three horizontal stripes following the contours around the case middle punctuated by the “WYLER” engraving on the opposite side.

The Code-S dial maintains a strong Wyler Genève identity with an applique comprising surrounds for the chronograph counters, an oversized 12 and an inner oval ring. It is available in the classic colours of black and white as well as more modern interpretations in brown, taupe, gray and – for the ladies' models – mother-of-pearl. The bezel – a first on a Wyler Genève timepiece – allows further colour-coding possibilities and – for the ladies' models – jewellery version set with 140 precious stones. All models feature a domed, scratch-resistant sapphire crystal with anti-reflective coating on the inside.

Wyler Genève chose the reliability of its existing Swiss-made automatic chronograph movement, which has a 42-hour power reserve, to power the Code-S. A drilled, blackened oscillating mass with white Wyler Genève logo captures the wearer's movements in order to power the watch and is visible through a transparent sapphire crystal aperture in the case back. The new Code-S models are fitted as standard with an elegant foldover clasp with an engraved buckled in gold for the gold models and titanium for the steel models. They are water resistant to 100 metres and come with a 2-year international warranty.

The model presented for the Jewellery category of the Grand Prix de l'Horlogerie 2009 is in 18-carat red gold with a white dial and gold applique for the counter rings, hour markers and oversized 12. Its 18-carat red-gold bezel is set with 60 diamond baguettes for 2.90 carats and it has a matching white rubber strap with 18-carat red-gold foldover clasp.