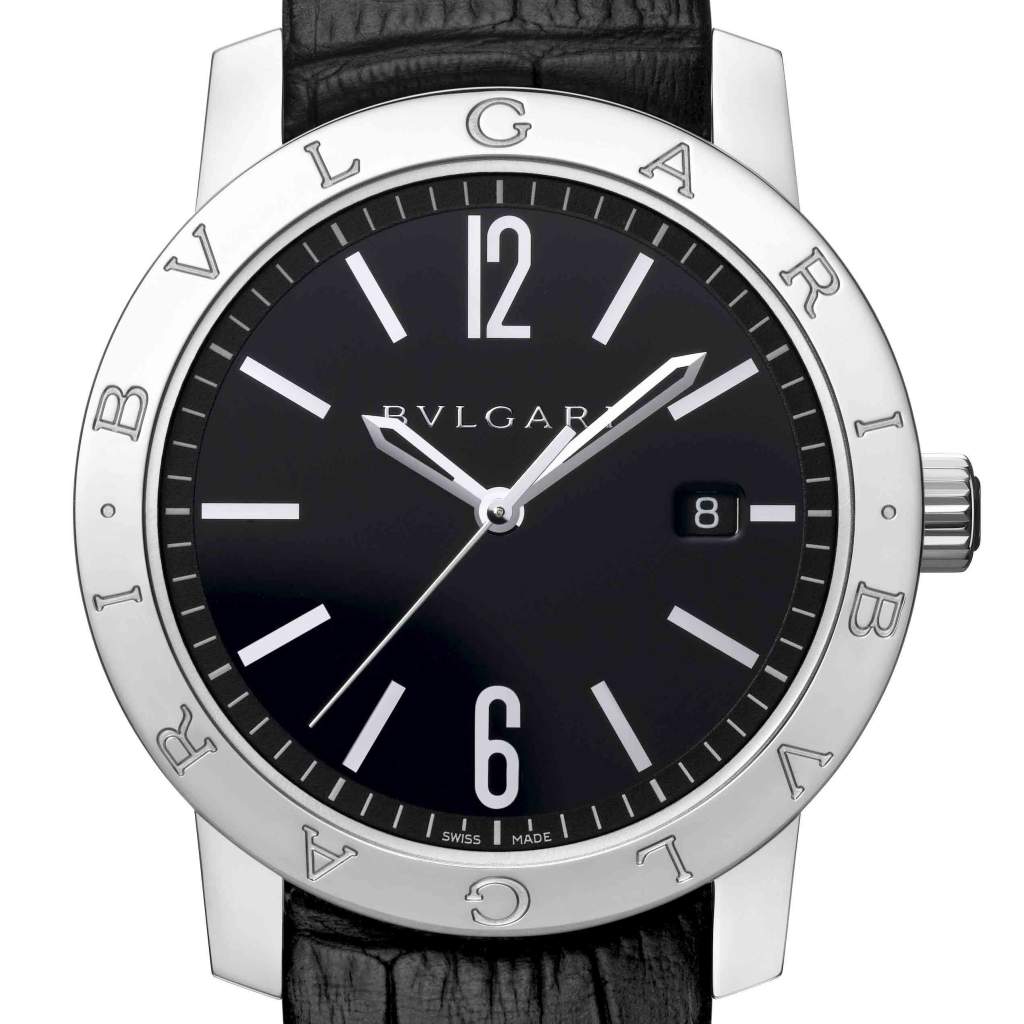 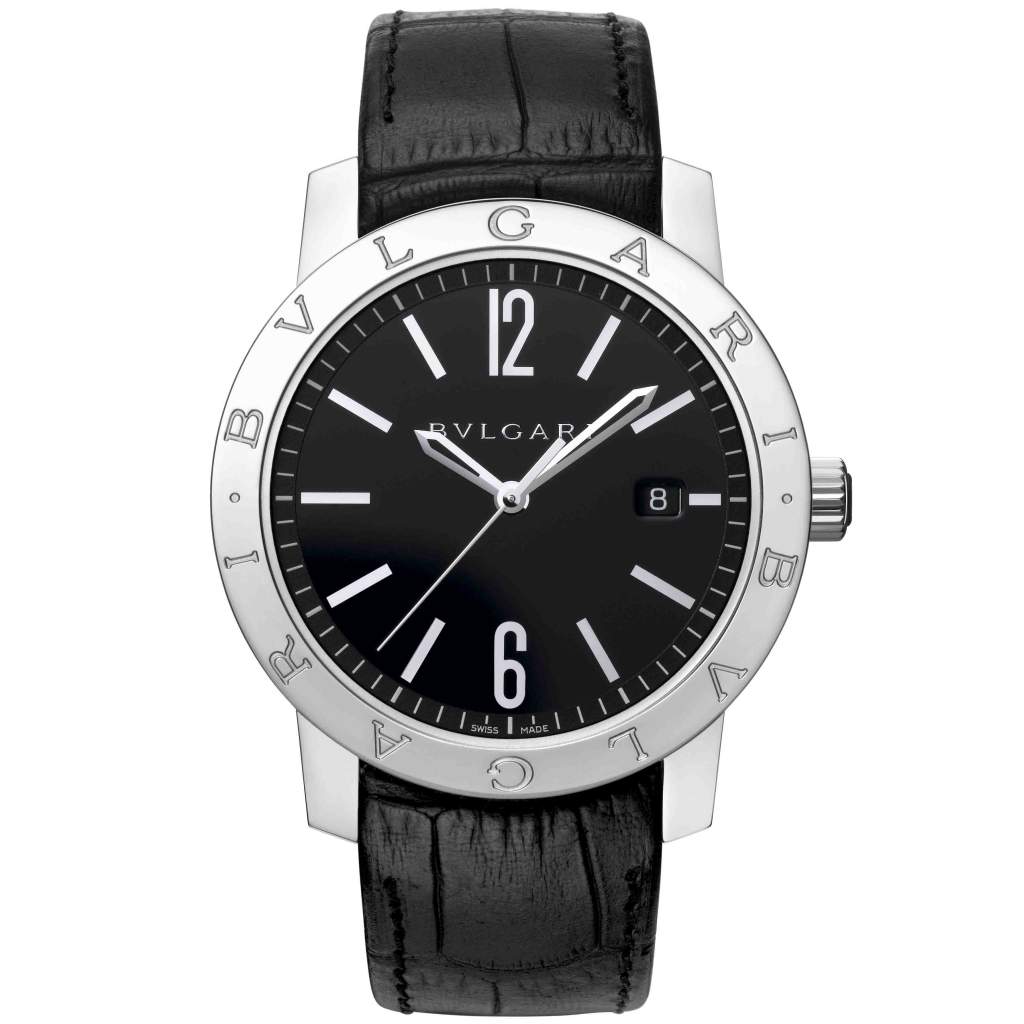 “I appreciate the very simple and refined Bulgari design. I’ve worn a Bulgari watch for years, and it still feels contemporary.” Sting, Musician

The BVLGARI BVLGARI 2013 collection showcases emblematic strength and expresses absolute loyalty to the pure and contemporary design codes of the most iconic Bulgari watch. The new and distinctive versions feature fresh designs, colours and materials in the strap, dial and case.

At the core, the new mechanical self-winding Calibre BVL 191 which Bulgari developed and produced in-house. Backed up by a 42-hour power reserve, the movement drives the hours, minutes, seconds as well as an instant date display at 3 o’clock. It features automatic winding via a ball bearing-mounted ceramic oscillating weight as well as an instant date change over a short three-minute period, a stop- seconds device that blocks the balance when the crown is pulled out, and a calibre equipped with a disconnecting system that avoids wear on the pinions while saving energy when the winding system is in action by means of either the crown or the oscillating weight. The constituent parts – main-plate, bridges and gearing train – are produced in the Manufacture Bulgari in La Chaux-de-Fonds, while final assembly of the movement takes place in Le Sentier at the Bulgari Manufacture de Haute Horlogerie.

The new collection is available in two sizes, with each size featuring discreetly varying differences.

Two versions, measuring 39mm in diameter, are crafted in 18k pink gold. One features a lacquered and polished ivory white dial and a brown alligator leather strap, while the second displays a jet-black dial matched with a black alligator leather strap. Engraved with the inscription ‘BVLGARI ROMA’ on its bezel, the latter is a 250-piece limited edition that pays tribute to the 1975 digital model that preceded the BVLGARI BVLGARI: produced as a limited series of 100 and intended as special gifts for Bulgari clients, it set off a wildfire of demand thus inspiring the launch of the now-iconic BVLGARI BVLGARI wristwatch.

The 41mm diameter version, offers a range of combinations alternating between two dial colours on either the steel case or the 18k pink gold version, with a black alligator leather strap or steel bracelet; alongside an elegant two-tone version combining steel and 18k pink gold on the case and bracelet.

The collection also introduces the BVLGARI BVLGARI Chrono, a steel-clad chronograph fitted with a black alligator strap or a matching steel bracelet. An 18k pink gold version with a black alligator leather strap is also available. These three variations display the classic chronograph functions: a central chronograph seconds hand, small seconds at 9 o’clock, a 30-minute counter at 3 o’clock and a 12-hour counter at 6 o’clock. The Chrono is driven by the mechanical self-winding Calibre BVL 328 with a column-wheel and holds approximately 50-hour in power reserve.

The crowning piece is a Tourbillon version that’s powered with a 64-hour reserve. The mechanism of the BVLGARI BVLGARI Tourbillon is visible at 6 o’clock on a black lacquered dial and provides glimpses of its sapphire crystal bridge beneath the hour and minute indication. A self-winding movement, the Calibre BVL 263 – crafted entirely in Bulgari’s workshops in Le Sentier – is housed inside an 18k pink gold case featuring a pink gold crown set with polished ceramics as well as a circular-grained and chamfered oscillating weight.

The Evolution of BVLGARI BVLGARI

The BVLGARI BVLGARI watch was launched in 1977 on the wave of the huge success of a limited edition digital watch engraved with the inscription ‘BVLGARI ROMA’ on the bezel that only the top 100 clients received as a Christmas present in 1975. As soon as it was seen, the ‘BVLGARI ROMA’ digital watch ignited requests to recreate the novelty item. Instead, only another limited edition watch in yellow gold, exclusively available at the boutique in Rome, was issued in 1976. One year later, clients’ passion for this model led to the BVLGARI BVLGARI watch, one of the most iconic designs in the history of horology.

The engraved BVLGARI BVLGARI logo was integrated as an important element of the design for the first time on any high-end watch: this distinction became its notoriety. In reality, this apparently ground-breaking intuition had deep roots, closely bound up with the identity and origins of Bulgari. The inspiration came from ancient Roman coins, on which the effigy of the emperor was surrounded by engraved inscriptions extolling his power and prestige. Likewise remarkable was the unprecedented volume of the cylindrical BVLGARI BVLGARI case, inspired once again by the imposing columns of Roman temples – an apparently simple feature that is actually the result of meticulous architectural study. With such unique features, the BVLGARI BVLGARI watch marked the beginning of a new era of design – an era that continues to this day.
The overnight success of BVLGARI BVLGARI propelled the watch into the pantheon of instant classics. In the 36 years since, it has withstood fickle fashion with commendable style, its various incarnations very gently tweaked from the originality and DNA of the first model.

Indeed, the evolutionary process is so subtle as to be virtually imperceptible. The traditional quartz movement, for instance, has been replaced by a mechanical escapement that has been gradually enriched with increasingly sophisticated complications like the tourbillon. The ergonomics of the case have also evolved: the back was reinterpreted with a highly sophisticated curvature to ensure it moulded perfectly to the wrist. The dial has retained its distinctive markers at 12 o’clock and 6 o’clock, but has grown progressively larger and easier to read, while harmonious shapes for the horns have been designed to make them fit more perfectly with the strap. Meanwhile, the famous bezel has been made slightly narrower so that elegance of the double logo stands out even more.

In the same way that evolution is an indelible part of human nature, the BVLGARI BVLGARI watch has re- invented itself over the years, but it has always remained faithful to its original elegance, even as more cutting- edge technical features are incorporated. After all, those who wear a BVLGARI BVLGARI watch become representatives of the Bulgari universe: invested in a piece of Bulgari tradition, of exquisite luxury and quality, of contemporary Italian design.

“The tranquillity with unparalleled power, the classic aesthetics with bold expression; it is not just a watch with remarkable design and excellent quality, it is a piece of art with incomparable enchantment. “ Mr Lu Chuan, Chinese Movie Director.