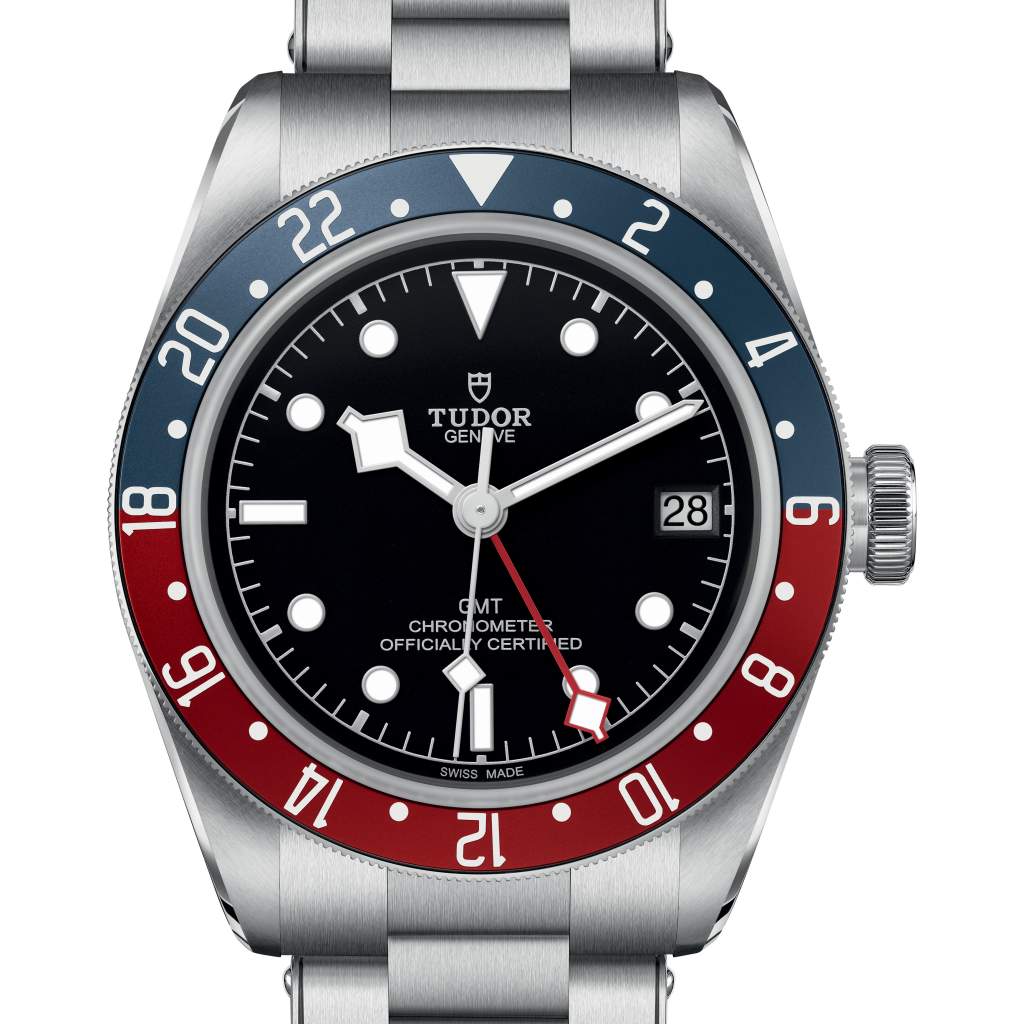 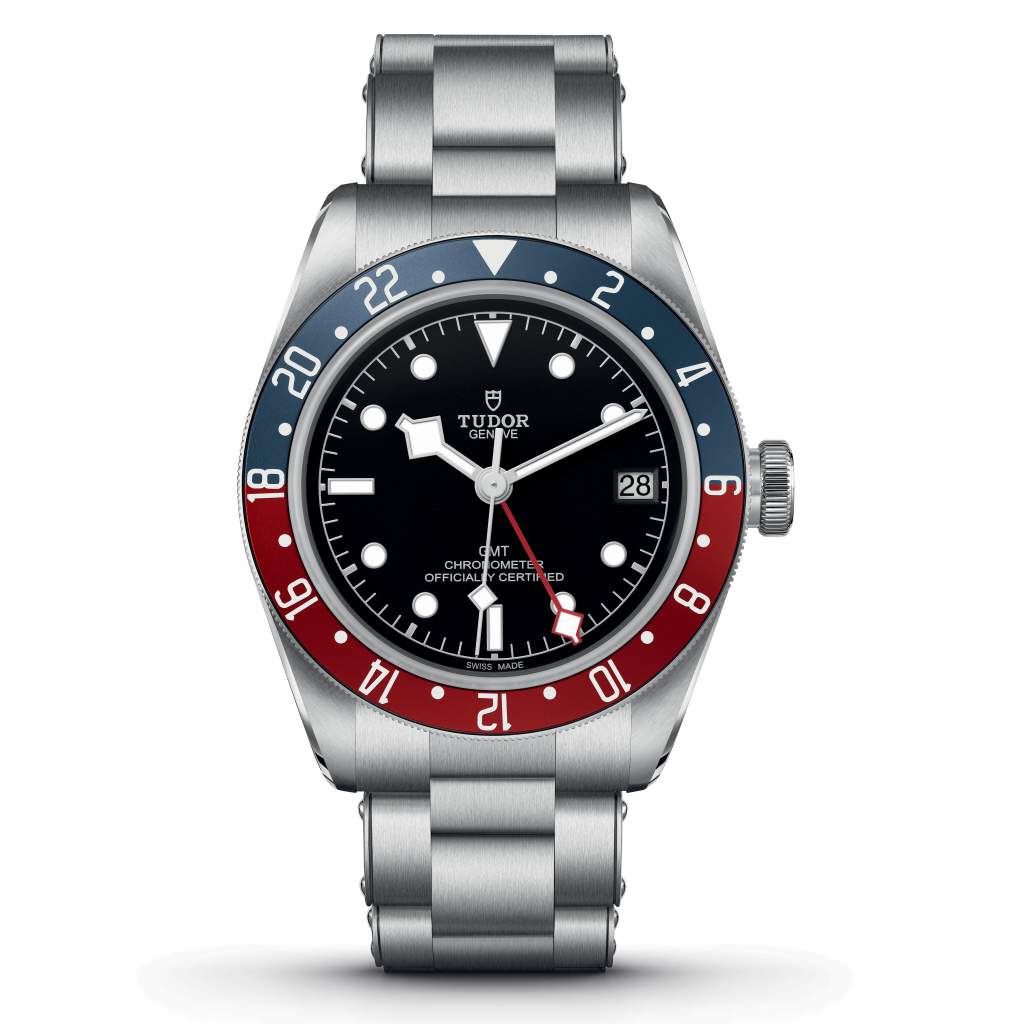 TUDOR is introducing the Black Bay to world time by adding a new GMT function. Sporting a distinctive, burgundy and blue bezel, this model is also equipped with a new manufacture movement. TUDOR is expanding its Black Bay line by presenting a model with a highly functional complication: a multiple time-zone function – also known as a GMT function – that establishes local time without losing sight of the time in two other time zones. Recognisable by its rotatable bezel, which derives its deep blue and burgundy colour theme from other models in the Black Bay line, but in a matt version, the Black Bay GMT is also a nod to the early days of this watchmaking function.

Additional time zones are indicated by a red Snowflake hand, TUDOR's aesthetic hallmark, which spins around the dial in 24 hours, as well as a bidirectional rotatable bezel that is also calibrated for 24 hours. The twelve daylight hours are printed on the burgundy section and the night-time hours on the blue.

With a steel case, 41 mm in diameter, the Black Bay GMT model is waterproof to 200 metres (660 ft) and designed to withstand the elements. Its winding crown tube is in satin-brushed steel, new for the Black Bay line and aesthetically in keeping with the case and winding crown. Its contrasting black dial means that it is legible in all conditions, including night-time, thanks to its luminescent hour markers. The dial features a GMT marker at 6 o'clock.

A new Manufacture Calibre with the reference MT5652 has been developed by TUDOR for the Black Bay GMT model. This introduces a new function to the line of TUDOR Manufacture Calibres, an apt demonstration of TUDOR's approach to technical development. The integration of new functions is allowed by a flexible architecture, rather than by adding ever more complicated modules. A defining detail and a must for purist watch enthusiasts.

The Calibre MT5652 has the appearance and finish typical of TUDOR Manufacture calibres. Its openwork rotor is satin-brushed with sand-blasted details and its bridges and mainplate have alternate polished sand-blasted surfaces and laser decorations. Its structure has been designed to ensure robustness, longevity and reliability, as has its variable inertia balance, which is maintained by a sturdy traversing bridge with a two-point fixation. Thanks to these qualities, together with its non-magnetic silicon balance spring, it is certified as a chronometer by the Swiss Official Chronometer Testing Institute (COSC). With a 70-hour power reserve, a wearer can take off the watch on Friday evening and put it back on again on Monday morning without having to re-set and wind it.

The bracelet of the Black Bay GMT model is inspired by the folding riveted bracelets of the TUDOR watches produced in the 1950s and 1960s. These were famous for having visible rivet heads that attached the links, as well as a stepped construction. These two aesthetic details are incorporated into the bracelet of the Black Bay GMT model, integrating modern manufacturing methods using solid links. Two additional designs are available: “Terra di Siena” brown leather strap and folding clasp or black fabric strap with a burgundy band. Made using the Jacquard technique, a traditional method achieved by a 150-year-old family firm from the St-Etienne region of France, this strap is a signature feature of TUDOR, which is thought to be a pioneer in this area.

Like other models in the Black Bay line, the Black Bay GMT features a dial inspired by the TUDOR divers’ watches produced during the 1950s. They adopt the characteristic angular hands known to collectors as snowflake that appeared in the brand’s 1969 catalogue. Lastly, the large winding crown, characteristic of the first generation of TUDOR divers' watches to be waterproof to 200 metres (660 ft), is also adopted in this new model.

The Black Bay line is the result of the subtle blend of traditional aesthetics and contemporary watchmaking. Far from simply being an identical re-release of a classic, it brings together over 60 years of TUDOR divers' watches at the same time as being resolutely anchored in the present. Whilst it is neo-vintage in aesthetics, its manufacturing techniques, reliability, robustness and the quality of its finish are consistent with today's standards.

TUDOR IS BORN TO DARE

In 2017, TUDOR launched a new campaign with the “Born To Dare” signature. It reflects both the history of the brand and what it stands for today. It tells the adventures of individuals who have achieved the extraordinary on land, on ice, in the air or underwater, with a TUDOR watch on their wrists. It also refers to the vision of Hans Wilsdorf, the founder of TUDOR, who manufactured TUDOR watches to withstand the most extreme conditions, watches made for the most daring lifestyles. It is testimony to Tudor's singular approach to watchmaking, which has made it what it is today. At the cutting edge of the watchmaking industry, its innovations are now essential benchmarks. The TUDOR “Born To Dare” spirit is supported throughout the world by first class ambassadors, whose life achievements result directly from a daring approach to life.

TUDOR is a Swiss made watch brand, offering mechanical watches with sophisticated style, proven reliability and unique value for money. The origins of TUDOR date back to 1926, when ‘The Tudor’ was first registered as a brand on behalf of the founder of Rolex, Hans Wilsdorf. He created the Montres TUDOR SA Company in 1946 to offer watches with the quality and dependability of a Rolex, at a more accessible price point. Throughout their history, TUDOR watches have been chosen by the boldest adventurers and seasoned professionals alike. Today, the TUDOR collection includes emblematic models such as Black Bay, Pelagos, Glamour and 1926. Since 2015, it has offered mechanical Manufacture movements with many diverse functions.