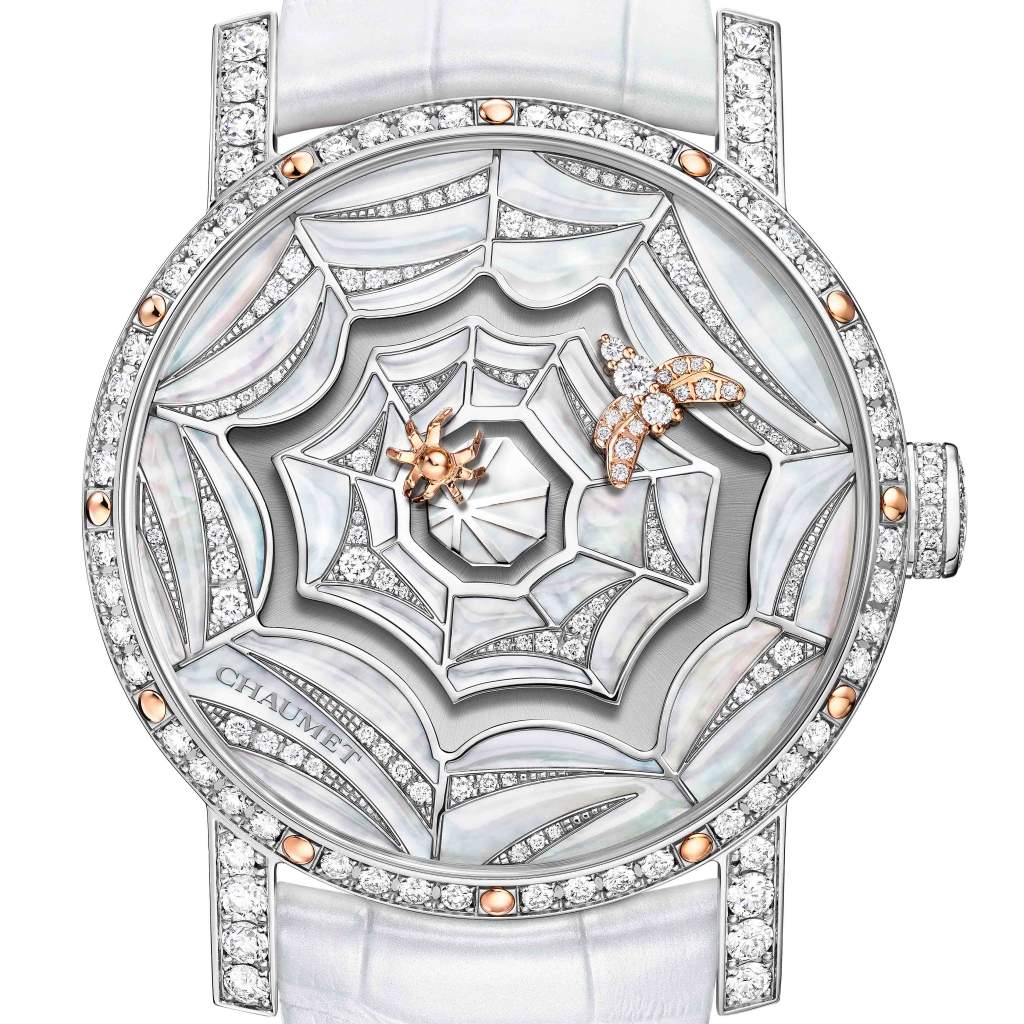 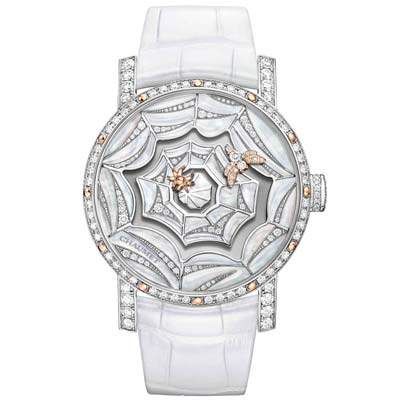 Chaumet reinterprets the telling of time and accomplishes an exceptional technical feat with the creation of an unprecedented and exclusive new caliber.

The precious new watchmaking creations of 2013 are born of the collaboration between Chaumet and the Swiss master craftsmen who practise and preserve exceptional savoir-faire and artistic decorative skills. They combine jewellery excellence with High Watchmaking, in a creative world where imagination and emotion know no boundaries.
The new creative complication watch by Chaumet sets the scene for a ballet between the Maison’s iconic bee and the spider, in a décor which is as spectacular as it is exquisite ; the game of seduction, where the pink gold spider represents the hours and the diamond-studded bee the minutes. This unprecedented way of telling the time has been developed exclusively for Chaumet, seamlessly linking technique and aesthetics. Thanks to a totally innovative automatic mechanical movement, this timepiece marks a new chapter in the Maison’s watchmaking history, inspired by innovation, excellence and emotion.

The bee and the spider… It is an eternal love story, a game of temptation as old as time… Since the  beginning at Chaumet, the two embrace and part. Play an exquisite “catch me if you can”. One spins its web to conquer the object of its desire. The other teasingly flies and dances around this love offering. Today the Maison tells of their new romance, suffused with watchmaking savoir-faire and innovation…

Gone are the traditional hands. Gone also the hours and minutes that endlessly turn round and  round in a routine manner. Here, the dial doesn’t just tell the time, it tells a story. The insects are the stars of the show: the pink gold spider represents the hours and the diamond-set bee the minutes, pointing to them with the tip of a wing. The backstage support is provided by an unprecedented mechanism, designed and developed exclusively for Chaumet, the CP12V-XII automatic winding calibre, a pure product of Swiss watchmaking excellence.

Mounted on two off-centred rails, the spider and the bee each follow their own distinct and intermittent path on the web. Adding exquisite detail to the creative complication, the bezel features diamond-set indexes for the minutes and twelve pink gold cabochons indicating the hours. The visual effect is captivating. The spider moves with the pace of the hours, slowly and patiently, waiting for its prey. The carefree bee boldly tempts it by the minute, edging closer and closer to its hunter until it brushes one of its legs with its wing. The dial is adorned with 43 mother-of-pearl elements representing a spider’s web, highlighted by brilliant-cut diamonds, creating a spectacular relief effect. The exquisite aesthetics, supported by the piece’s technical prowess, embody the emotion of precious time.