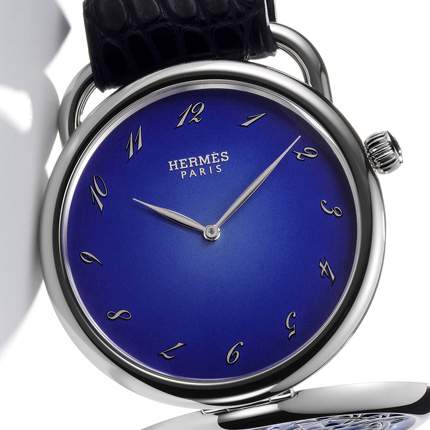 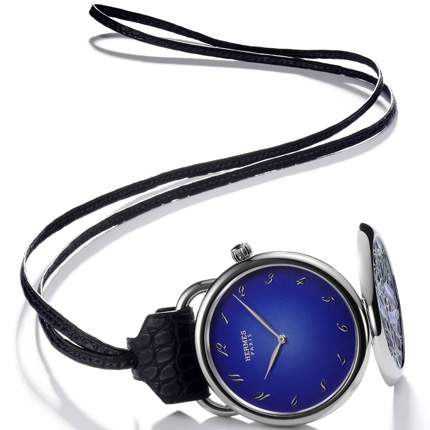 By placing 2012 under the theme of “The Gift of Time,” La Montre Hermès this year turns to the wonders of the sky and offers the Arceau pocket collection a new design: the astrolabe. The brand has created a one-of-a-kind piece, whose cover features the rare craftsmanship of plique-à-jour enamelling.

Star-taker
The astrolabe, from the Greek meaning “star-taker,” is an instrument for measuring the height of the sun or a star above the horizon, in particular to determine the time. Formed from circular rings placed inside one another, it represents the movement of the stars as the ancient astronomers imagined it. This sophisticated geometry, as subtle as it is poetic, inspired designer Pierre Marie to create the Arceau Pocket Astrolabe. The design is showcased in the cover of this pocket watch featuring a round, classic and tasteful case and a stirrup-shaped strap attachment.

Plique-à-jour enamelling
The reason the image of the astrolabe gleams so brightly on the cover of this pocket watch is that it uses the traditional hand-crafted technique of plique-à-jour enamel that is rarely applied in the watchmaking domain.

The subtly nuanced plique-à-jour enamel technique involves three stages. The first step consists in etching out the motif from a baseplate or sheet of metal. The outline of the astrolabe formed by the remaining gold wires appears between the pliques or openings of the metal filigree. In a second phase, the pliques form cells that are filled with enamel. Successive firings at 800°C reveal the colours one by one in all their delicate translucency. Small moon-shaped gold paillons or spangles are dotted across the vitrified surface, lending a subtle sparkle to the astrolabe. Finally, after the last firing, the metal backing is removed. The design then reveals itself like a miniature stained glass: light passes through the enamel, enhancing the velvety intensity and shimmering gleam of each colour.

A unique art object
By commissioning an enamel artist to realise this extremely intricate design on the small surface of a pocket watch, by drawing on his experience and his skill to express the poetry inherent in the design, La Montre Hermès has created a one-of-a-kind piece that is a true art object. When the cover is opened, the circles of the astrolabe appear in a palette of blue, turquoise and indigo, punctuated by touches of silver. Facing it, the watch dial appears in all its simplicity, enamelled in midnight blue with the characteristic sloping numerals of the Arceau. This pocket watch is equipped with the mechanical self-winding Calibre H1928 by Vaucher Manufacture Fleurier, with an oscillating weight in 18-carat solid gold. Finally, a matt indigo alligator strap tops off this precision-engineered timepiece.