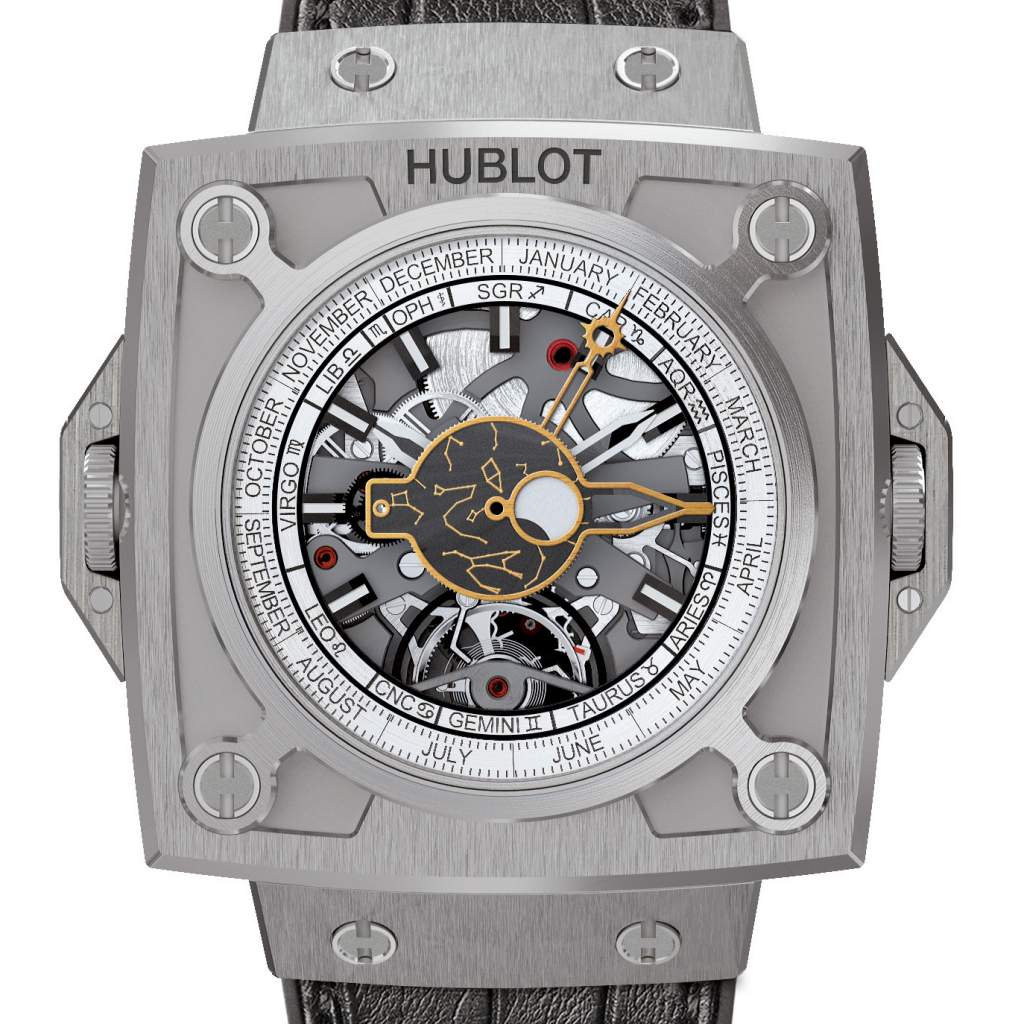 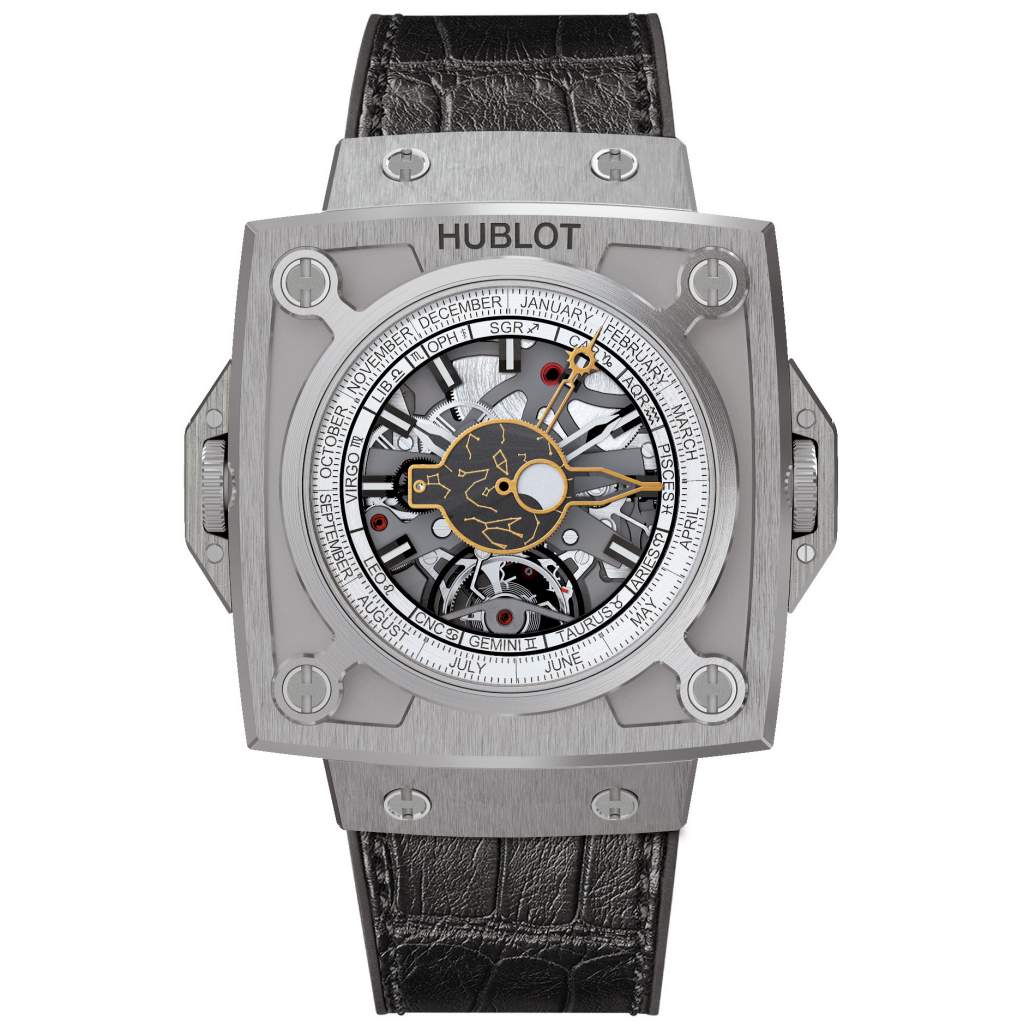 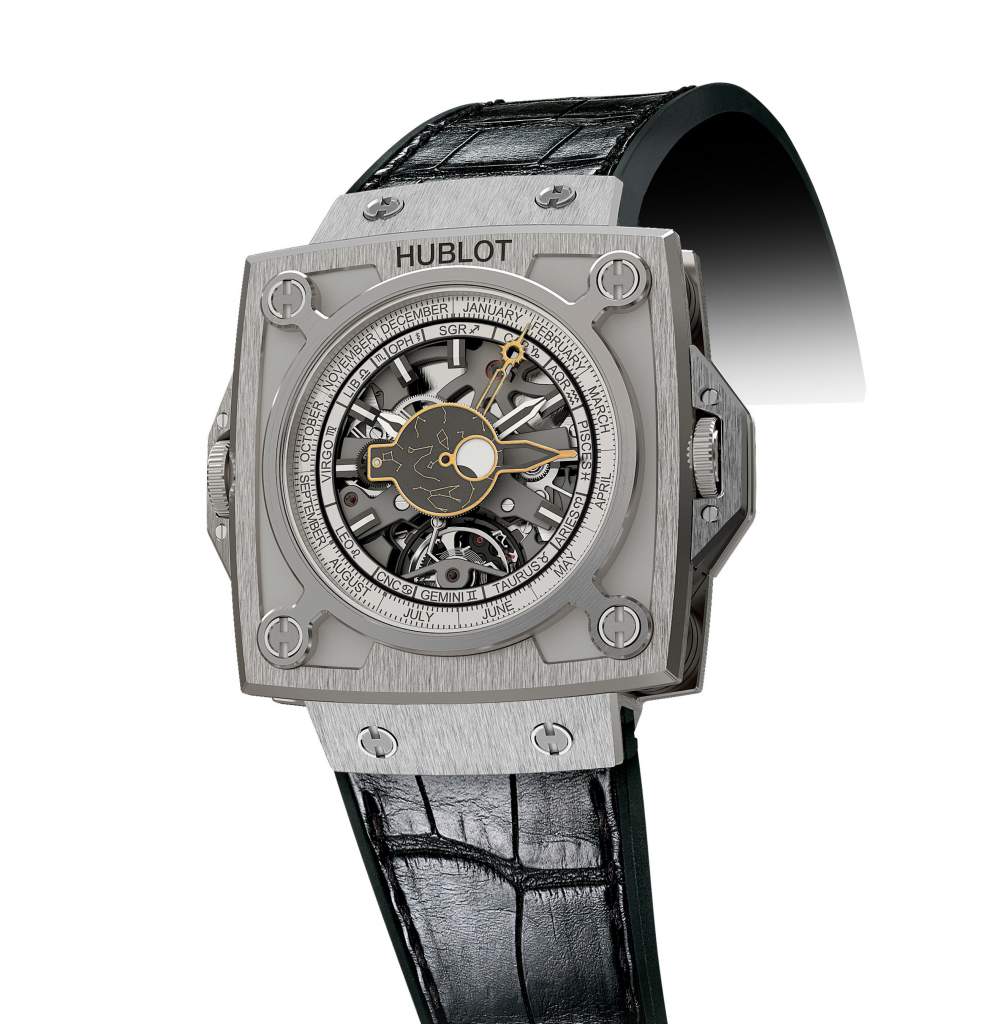 ANTIKYTHERA SUNMOON watch
The fusion of Antiquity and Modernity.
One year on from the launch of the "Tribute to the Antikythera Mechanism" at the Archaeological Museum of Athens, Hublot presents the "Antikythera SunMoon" watch, featuring highly precise Sun and Moon indications.
The Antikythera mechanism is one of the most mysterious objects in the history of civilisation. Discovered in Greek waters in 1901, it is considered the first "astronomical calculator" in the history of humanity, and dates back to the 2nd century BC(sometime between 150 and 100 BC.).
On the 5th April 2012, all of the original remains of the ship, the treasure and the Antikythera Mechanism were brought together in a single exhibition at the prestigious National Archaeological Museum of Athens, and unveiled in the presence of the Greek Minister for Culture. It was a significant event for the international archaeological and scientific communities. Among the objects being exhibited was the "Tribute to the Antikythera Mechanism" watch, a complex horological movement developed by Hublot as a tribute to the first "astronomical calculator" in the history of humanity, and probably dating back to the 2nd century BC. It was the first time that a watchmaking manufacture had had its work exhibited in a museum.
Hublot only produced four movements, each an exact miniature replica of the original mechanism: The first is on display at the Musée des Arts et Métiers (Museum of Arts and Crafts) in Paris, the second at the National Museum of Athens and the third is held by Hublot in recognition of the craftsmanship and ingenuity of its own engineers and watchmakers. The fourth will be sold at a unique auction in 2014.
Today, as part of Baselworld 2013, Hublot presents the "Antikythera SunMoon" watch, a unique edition of 20 pieces featuring a simplified and miniaturised version of the original mechanism, in honour of this masterpiece of Antiquity.
Unveiled today, the result is a movement containing 295 components and 7 complications (compared to 495 components and 14 functions for the Hublot calibre exhibited at the Museum of Athens). It features only Sun and Moon indications. All of the indications are found on the dial side.
The Antikythera SunMoon includes both a solar and a lunar calendar, as well as an indication showing the sidereal position of the Sun and the Moon. This means that, as well as being able to read the time (hours and minutes), the wearer of this watch can ascertain, for a given day and with extreme accuracy, the phase of the Moon, or more specifically its shape in the sky, the name of the constellation behind the Moon and the time required for the Moon to pass through a constellation. For the same day, the watch shows the constellation located behind the Sun and indicates the time required for the Sun to pass through a constellation. The piece is completed by a flying tourbillon (without ball bearing) which rotates once every minute to indicate the seconds, with the hours and minutes shown by traditional hands at the centre of the movement on the dial side. Frequency 21,600 Vib/h (3 Hz). 120-hour power reserve.