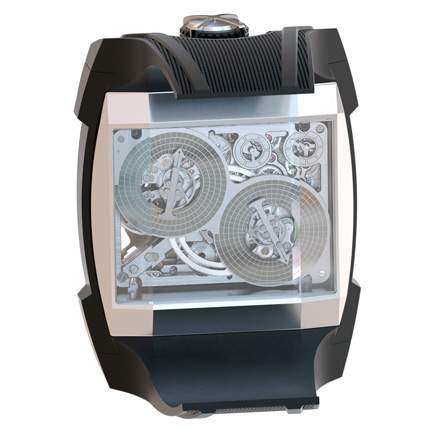 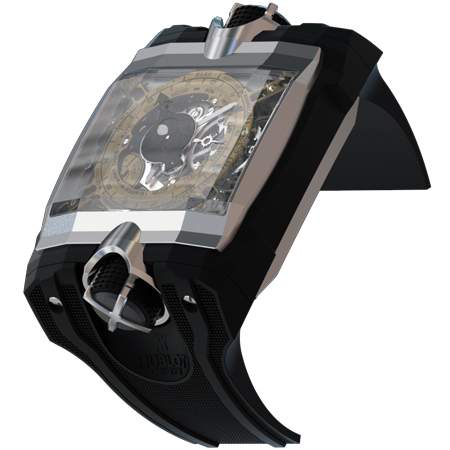 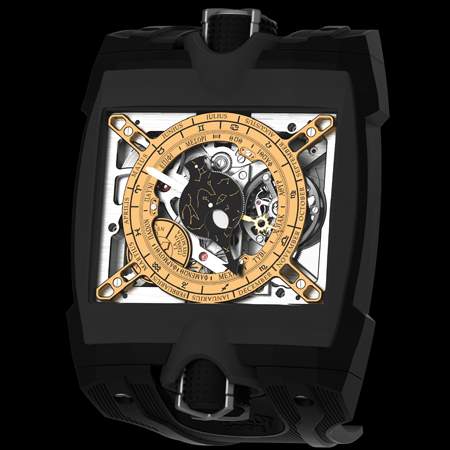 It is a singular event. The ultimate stamp of approval for the work and ingenuity of the watchmakers: the Swiss watch firm Hublot is extremely honoured to have been invited by the Archaeological Museum of Athens to present the "Tribute to the Antikythera Mechanism" movement, the famed astronomical calculator, which probably dates from the 2nd century BCE, and the remains of which were discovered in Greek waters in 1901. This instrument shows the different cycles of the sun and the moon and, in all likelihood, the planets, with the greatest precision.
Attended by the Greek Minister for Culture and the Director of the Archaeological Museum of Athens, Dr Nikolaos Kaltsas, the Hublot movement officially joined the National Museum's collection on the 5th April 2012 and will now be on display alongside the remains of the original mechanism. It is the first time that a museum of archaeology has invited a watch manufacturer to exhibit a movement as part of its collections.

The approach
Barely six months ago, at the Musée des Arts et Métiers in Paris, Hublot unveiled the movement it had developed to the public. It is still on display as part of the exhibition entitled "Antikythera, the enigmatic machine which arose from the depths of time" until December 2012, paying tribute to man's ingenuity and creativity.

At the behest of Jean-Claude Biver, Chairman of Hublot, only 4 Antikythera movements would be created. Four, and no more. No commercialisation. The project has the purest of intentions.

The first movement is already on display at the Musée des Arts et Métiers in Paris, the second is today officially joining the collection of the Archaeological Museum of Athens, the third will be put up for auction to raise funds for the Archaeological Museum of Athens to conserve the original Antikythera mechanism. Finally, the fourth and last will be kept by Hublot at its manufacture in Switzerland, with the watchmakers who created it.

Hublot also wanted to pay tribute to this masterpiece of Antiquity by reproducing the mechanism in miniature, resulting in a movement with the dimensions of a wristwatch, adding to it hours, minutes and a tourbillon escapement system. The perfect fusion between ancient and modern times. The various known indications of the Antikythera "machine" have been faithfully reproduced on this wristwatch, both on the front and the back. The primary face of the movement shows: the calendar for the Panhellenic games (including the ancient Olympic games, the precursor to our modern Olympics), the Egyptian calendar, the position of the sun and the movement and phases of the Moon in the constellations of the Zodiac. On the back of the watch movement, the lunar/solar astronomical cycles can be found: Callippic, Metonic, Saros and Exeligmos.

The Antikythera mechanism is one of the most mysterious objects in the history of civilisation. Nowadays it is renowned and studied in great detail by the scientific community, but when it was first discovered back in 1901, its great historical and technical value remained a mystery to be uncovered. The very idea of a "machine" created in Greco-Roman Antiquity did not enter the conceptual framework of the specialists of the time. Thereafter, obscurantist statements from non-scientists claimed that the artefacts from Antikythera were almost extraterrestrial in nature, which only served to muddy the waters.

Toothed wheels eaten away by corrosion
The fragments of this "machine" were only analysed in-depth, taking a multidisciplinary approach, at the beginning of the 21st century. This work enabled the complexity of this extraordinary mechanism to be better understood. We now know that this "astronomical instrument" dates from the 2nd century BCE (circa 150 - 100 BCE,). Originally, it served as a "calculator"; its bronze gear trains were housed in a wooden box measuring approximately 33 cm x 18 cm and its case was sealed with two bronze plaques covered with inscriptions.

Only 82 fragments of this "machine" still remain, some minuscule, all corroded: they are now forever protected in the National Archaeological Museum of Athens. A state-of-the-art tomography study (using an X-ray scanner) has provided images which can be used both scientifically and archaeologically, revealing numerous internal gear trains which are invisible to the naked eye, toothed wheels and new inscriptions hidden under the concretions: less than a quarter of the ancient Greek lettering of this text engraved on the "machine" has successfully been deciphered, but it is believed to be a sort of "user guide" for the mechanical calculator, also thought to show the movement of some major planets. The gears were driven by what is believed to be a side handwheel – but the possibility of an auxiliary hydraulic system has not been ruled out.

On the trail of the great Archimedes...
It is now accepted that this machine could have been designed in Rhodes, home to a community of astronomers including Hipparchus, as well as mechanical engineers such as Posidonios. A new hypothesis has been put forward: this machine could be closely linked to Syracuse, in Sicily, the city of the famous mathematical genius Archimedes, then a prosperous Corinthian colony, or even with the city-state of Corinth itself. The Antikythera mechanism could have been designed there decades before the shipwreck which subsequently gave the large island its name.

According to current knowledge and based on the inscriptions which have been deciphered, the Antikythera mechanism could show the different cycles of the sun, the moon and (in all likelihood) the planets, relating these to the civil calendars of a Greek city (Corinth or one of its colonies), and showing the dates of the most prestigious games of the ancient world.... The study of the Antikythera mechanism – only very recently begun – is far from being finished, but it has given rise to a great wave of reinterpretation and reassessment of our knowledge of Antiquity. The reality of the mechanical knowledge held by these Greek scholars is a fantastic field to explore. It may even be that a record is found, in the texts or in the hidden reserves of museums, of other "machines" like the Antikythera mechanism.

Mechanical gear trains which express a mathematical vision of the cosmos
The Antikythera mechanism is not a clock capable of showing the time: ancient civilisations did not experience time as we do. A genuine cosmograph (a machine to describe the cosmos), and also a selenograph (a machine to describe the complex movements of the Moon), the Antikythera mechanism was highly accurate and could show multiple astronomical cycles, including the Metonic cycle (named after the Greek astronomer Meton: it runs for 19 years, equal to 235 lunar months) or the Callippic cycle (named after the Greek astronomer Callippus: it runs for 76 years, equal to 940 lunar months of four Metonic cycles). The Antikythera mechanism also showed the Saros cycle (223 lunar months covering just over 18 years), as well as the Exeligmos cycle (equivalent to three Saros cycles, or 54 years) which served especially to predict possible eclipses. The volume of astronomical data compiled to create a mathematical model able to summarise such cycles using mechanical gear trains is astonishing evidence of the conceptual abilities of the scholars and engineers of Antiquity. Given that a computer can generate data other than that entered into it, the Antikythera "machine" really is the first mechanical computer known to man. It was a good thousand years ahead of the first astronomical clocks created on a whole different scale in the main European cities in the Middle Ages.

The first watch ever to be inspired by an archaeological find
In 2006 and 2008, the revelation by the scientific journal Nature of tomographic analyses performed on the fragments of the machine certainly fuelled the imagination of some less conservative watchmakers. Mathias Buttet, current Director of Research and Development at the Hublot manufacture, wanted to pay homage to the historical legacy which this first mechanical masterpiece represents. A technical tribute and a miniature recreation of the entire Antikythera mechanism as revealed by scientific analysis, crafted to fit perfectly on the wrist. It is also a homage to watchmaking, as it adds a new dimension to this astronomical calculator: that of a timepiece in its own right, capable of accurately measuring the time. It is the first time in the history of watches that a watchmaking development office has taken direct inspiration in this way from an "archaeological" mechanism dating back to Antiquity. It is also the first time that a watchmaking team has worked hand in hand with a team of scientists bringing together leading international figures in archaeology, epigraphy and historians of mechanical engineering.
The watchmakers helped the archaeologists to better understand some gear trains and to confirm some hypotheses relating to the mechanics, while the scientists shared with the watchmakers technical solutions hitherto lost in Antiquity (in particular circular gears with non-linear cycles). The sheer ability of the mechanical engineers of Antiquity to create such efficient bronze gear trains opens up new horizons in their philosophical relationships with technical progress and with the place of machines in their conception of the world – which can only in turn make us question our own relationship with modern-day machines and "gadgets"...

Faithful reproduction of the astronomical indications of the mechanism conceived by the ancient Greeks
The challenge facing Mathias Buttet's team was to integrate a watchmaking heart within a miniaturised reinterpretation of the Antikythera mechanism, respecting the architecture of the original, and in particular its double-sided display. The team's first task was to create in a few cubic centimetres what the mechanical engineers of Antiquity had developed over several thousand cubic centimetres, ensuring their creation was perfectly in keeping with the spirit of the original mechanism, both in terms of its accuracy and the legibility of its indications.

The hours and minutes are displayed in the conventional manner, at the centre of the movement recreated by Hublot and presented for the first time at the Musée des Arts et Métiers de Paris (the Museum of Arts and Crafts in Paris), as part of its exhibition entitled "Antikythera, the enigmatic machine which arose from the depths of time". This watchmaking movement is regulated by a conventional tourbillon whose "cage" at 3 o'clock completes one revolution in one minute.
The various known indications of the Antikythera "machine" have been faithfully reproduced on this miniature miracle, both on the front and the back. The primary face of the movement shows: the calendar for the Panhellenic games (which designated those cities hosting the games), the Egyptian calendar (12 months each of 30 days, with the epagomenal, or additional, days), the position of the sun in the constellations of the Zodiac, the phases of the Moon (with a magnificent hand and aperture which shows the position of the Moon in the zodiac throughout the sidereal month), as well as the sidereal year. The back of the watchmaking movement shows the Callippic cycle, the Metonic cycle, the Saros cycle and the Exeligmos cycle.

A modern micro-mechanical tribute to the mechanical engineers of Antiquity
This is the first time in the history of timepieces that these cycles - a legacy from Antiquity – have been studied, reproduced and displayed mechanically: to create some of these gears, the Hublot team had to develop a highly innovative concept of noncircular telescopic hands, capable of pointing to the spiral discs of varying radii.