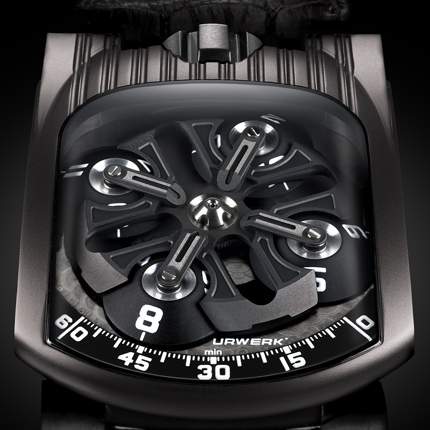 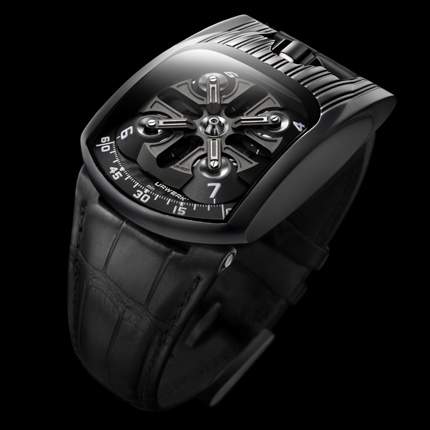 The UR-103 collection by URWERK: A new vision of time

With the UR-103 models, URWERK takes its 'no limits' approach to haute horlogerie ever further. Four orbiting and rotating satellites display the hours, with each satellite indicating the time in a both analogue and digital fashion as it arcs across the minute chapter. This sophisticated and ground-breaking complication is the result of years of research, development and testing.

The principle technical challenge was ensuring excellent isochronal performance of the satellites while minimizing friction and loss of energy. No simple task as, together with the supporting orbital cross, the satellite complication weighs in at 160 times heavier than traditional hands. URWERK's co-founder and master watchmaker, Felix Baumgartner, took up the challenge and chose high-tech materials to minimize mass and thus maximize chronometric efficiency.

The four hour-satellites of the UR-103 are crafted in aluminium and are suspended under a grade-2 titanium orbital cross. The complication is mounted on a non-magnetic ARCAP P40 base plate providing superior strength and stability to traditional metals. The hour-satellites complete a full revolution under the orbital cross every four hours. As the satellite approaches the crown position, an internal Geneva cross causes it to undergo a 120 degree rotation on its own axis. This 120 degree rotation positions the next hour for its turn indicating the time at the front of the dial.

Over a one-year time span each orbital cross completes 2190 rotations and each satellite 730 revolutions on its own axis.

URWERK's integration of a Control Board on the back of the 103 was a world first for a wristwatch. This 'dashboard' features a 43-hour Power Reserve indicator, a Chrono Meter with minutes and seconds facilitating accurate time-setting, and, in a nod to Abraham Louis Breguet, a Precision Adjustment screw making it possible for the owner to precisely regulate the timing of their UR-103 to match their own lifestyle. An exceptional complication merits an exceptional case and in the UR-103 series URWERK's gifted designer and co-founder, Martin Frei, exceeded himself. Beginning with the geometrical base of a square and a circle, Frei designed a three-dimensional asymmetrical case the likes of which have never been seen before. Machining the UR-103's complex form is a major engineering feat in itself. As Felix Baumgartner says, “URWERK's innovative timepiece is the result of nearly three years of development and a further two more years of testing. . . the end result went beyond our dreams.”