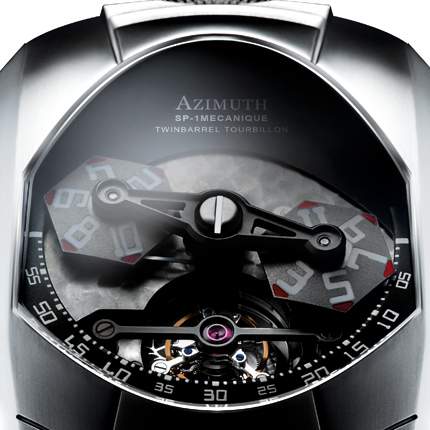 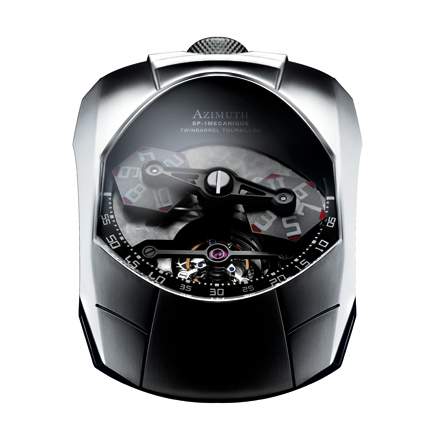 Inspired by the most hard core contemporary super cars that only the most well heeled and affluent watch connoisseurs can appreciate, Azimuth “Twin Barrel Tourbillon” (TBT) represents a brand new era of “micro-machine making”. It is not a watch; we never intended it to be so; it's a complex modern machine that draws its inspiration from the sexy silhouettes and raw muscle power of the various marques in the high end market of super cars.

Pushing the boundaries of Avant-Garde design, Azimuth has yet again surprised the watch fraternity by introducing another “Out of the Box” design to couple a unique time reading mechanism with a highly coveted Tourbillon mechanism.

A peek at the machine's bodywork reveals what the creators of Azimuth had wanted to achieve; an instrument that amalgamates the founders' love of fast cars, the fast lane and haute horology.

Fashioned and CNC cut from a solid block of Titanium, this ultra lightweight case similar to the racing bodies of super cars, is adorned with plates of carbon fibre fitted into the recesses at the sides as well as the back of the case.

Examining the domed cockpit of this TBT and you will realise that the highly contoured windscreen is a work of art. Extremely complex and difficult to produce, this double domed sapphire crystal gives an added dimension to the aesthetics of the case.

At the 6 o'clock position beats a massive Tourbillon mechanism with KIF shock absorption system which acts as the “suspension” for the balance staff and the massive cage.

As with the finishing of some of the engine blocks of super cars, the Tourbillon Center Bridge is also “Black Gold” plated to give it a more sporting feel. The high beat 28,800 VPH, 5-day (120 hrs) power reserve Tourbillon movement is perhaps the equivalent of a 600 BHP, 12-cylinder turbocharged engine but with the finesse of a luxury sports saloon that you know can be trusted to perform to its upper limits! Connoisseurs expect nothing less than a well-stitched, handcrafted interior to complement the voluptuous beauty of their super cars. In the same spirit, the unique interwoven fibre leather strap with contrast stitching in this TBT is specially crafted to embody this very essence found in the super cars.

To reduce drag on the movement, Azimuth has constructed each of the interlocking and moving parts of this hand system from Titanium, with not only the huge arm that suspends the twin discs made from Titanium but also the twin discs as well as the gears underneath them.

Ball bearings are also designed in areas where constant discs rotation is experienced to reduce friction drag, a consideration which may affect its time keeping properties.

The Tourbillon mechanism is incorporated to eliminate any positional errors that arise from the constant G-force experienced by the escapement. All this to ensure precision timekeeping capabilities Azimuth has come to expect from its exceptional creation.