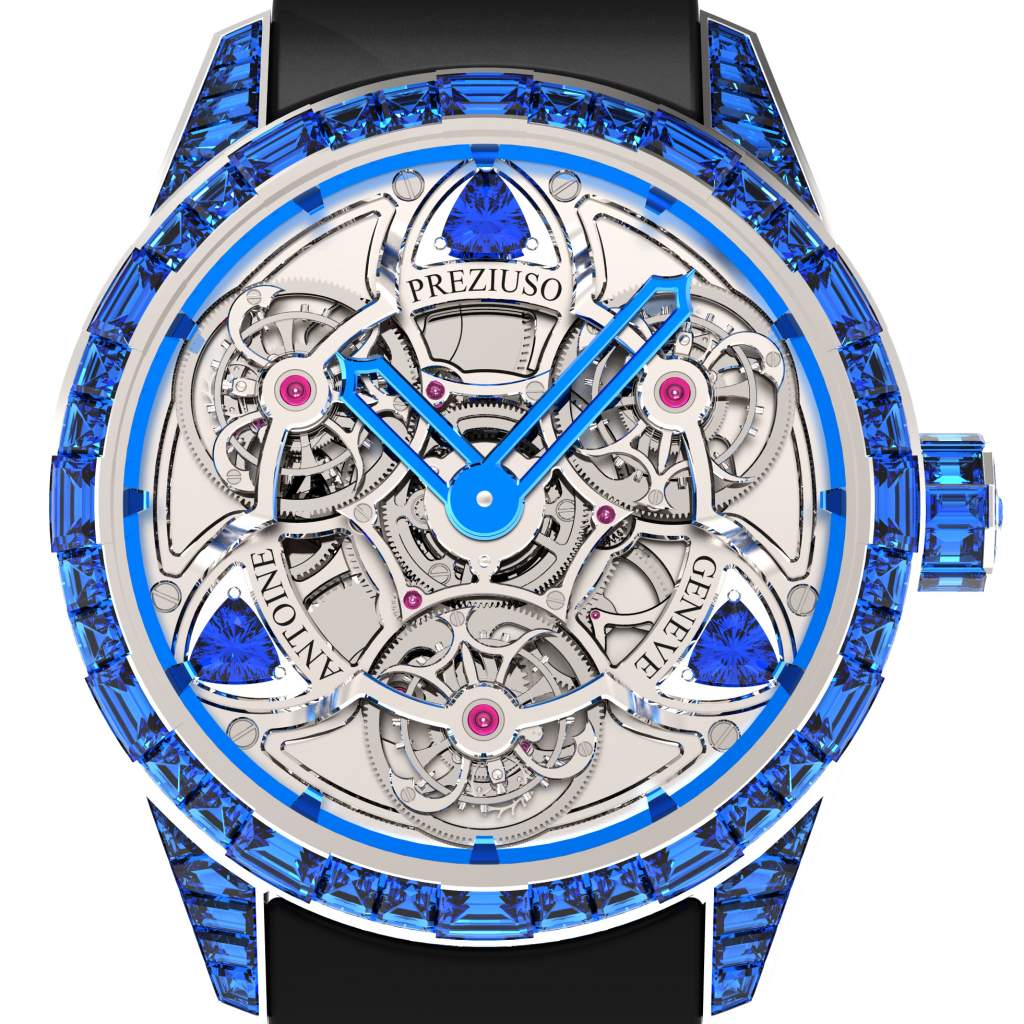 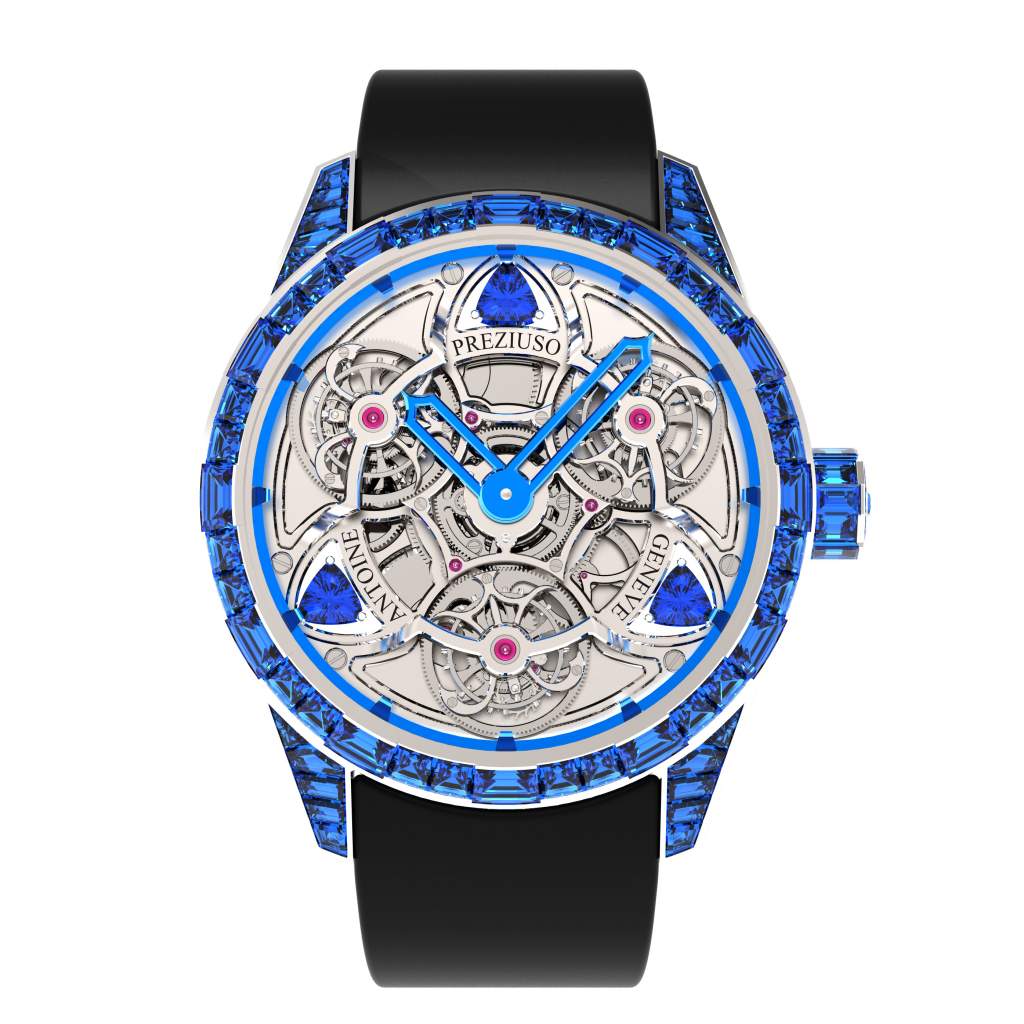 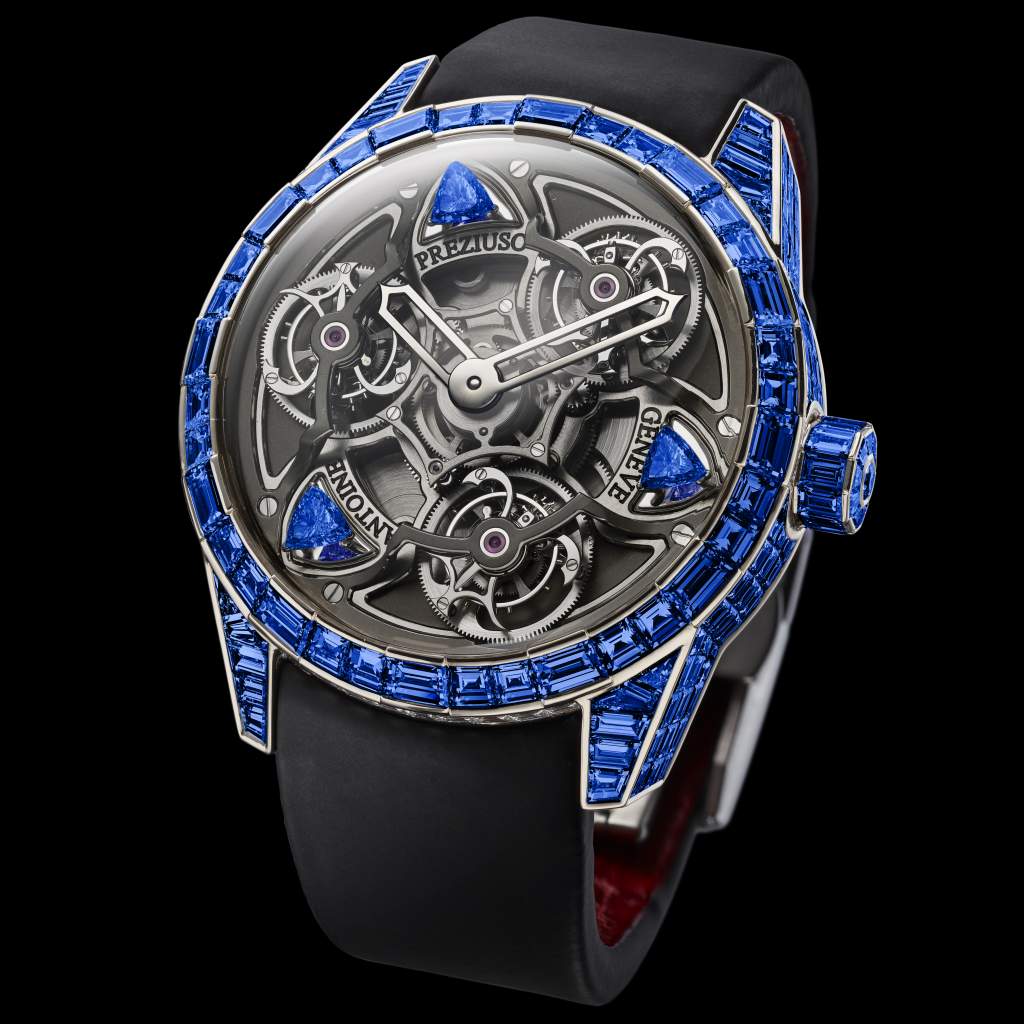 With his excellent reputation for watchmaking craft, Antoine Preziuso is proud to present his new création TTR3 Blue Equalizer Frequencies.

This unique watch in 18 ct white gold contains 233 saphirs of over 24 ct in total, in rare blue royal, baguette-cut, invisible mounting, with three solitary trillion saphirs floating on the dial, beside the three tourbillons.

The Tourbillon of Tourbillons movement, a core component for this brand, is the result of a collaboration between him and his son Florian that is at the heart of this brilliant watch.

Unmatched regularity  thanks to its triple differential. AFP-TTR-3X – The Power of Three

Three international patents protect the TTR3 Blue Equalizer Frequencies. reflecting the creativity and capacity for innovation of ANTOINE PREZIUSO GENÈVE, where the project was brought to fruition after a decade of research.

Multiple Tourbillons on a Revolving Plate

Associating three tourbillons on a revolving plate gives the timepiece unmatched regularity, thanks to  its triple differential. Each tourbillon completes one rotation per minute, at a faster rhythm than the plate, which completes six rotations per hour (one rotation every ten minutes). The speed at which the tourbillons rotate is accelerated by this double revolution. They are placed equidistant from the centre of the plate, with their respective axes forming an equilateral triangle. Isochronism is enhanced by the fact that the three cages rotate on different axes and at variable speeds.

This differential is unique both in its conception and the variety of tasks it performs. It must distribute constant energy from the double-barrel to the three tourbillons through the centre of the watch, without affecting the axis of the hands; react if one the tourbillon stops working; and correct any variations in frequency. It contains the tiniest ball-bearing in the world, barely 1.6mm in diameter!

The closeness of the three independent regulating tourbillons – and their positions on the plate – enable them to resonate, and naturally adopt an identical frequency through a phenomenon known as “synchronism”. When the tourbillons start to resonate, their amplitude increases significantly – in a manner perceptible to the naked eye. The system as a whole thus forms a single revolutionary regulator, vibrating at a perfectly stable frequency of 3 Hz.

The generously sized 47 mm case has a sapphire back that allows the beholder to admire all the beauty and complexity of the patented movement, with three tourbillons to the front connected by a triple-differential gear rotating around each other in 60 seconds while the plate completes six rotations each hour.