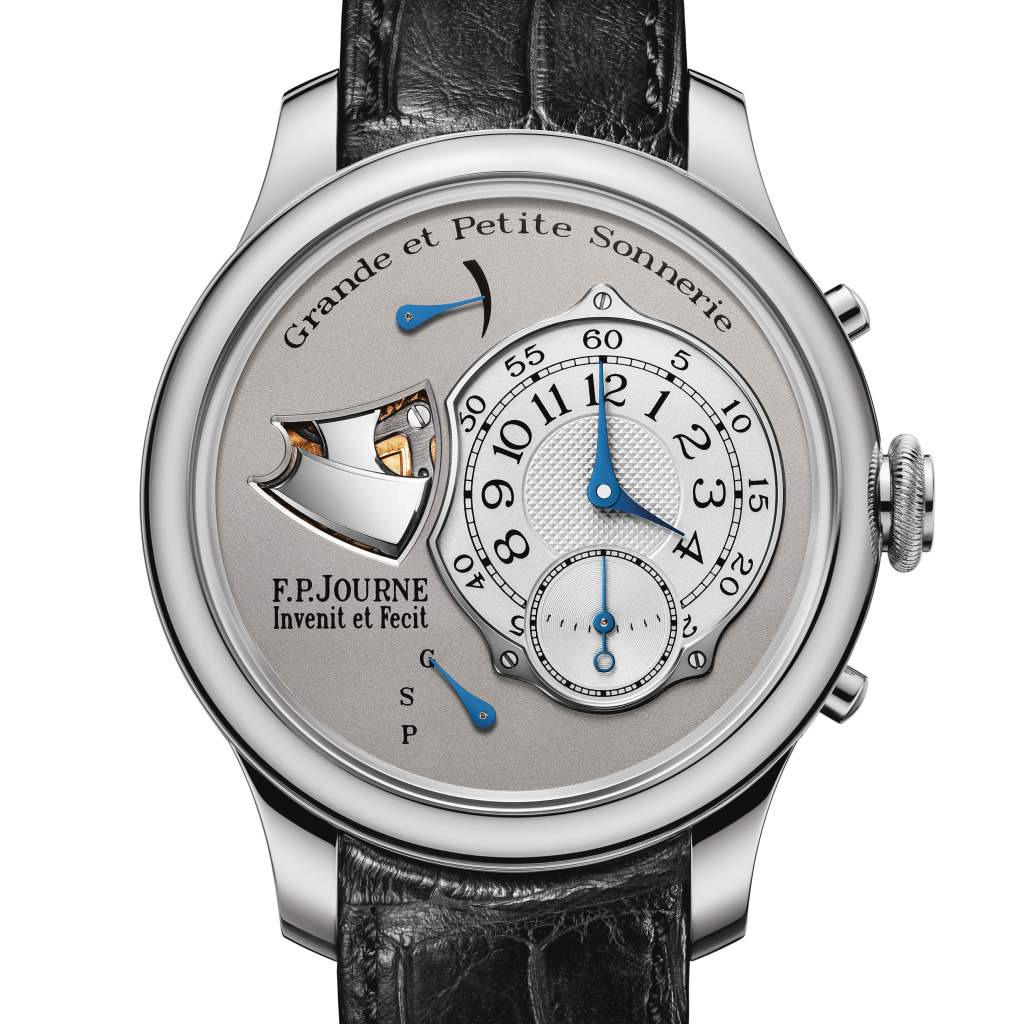 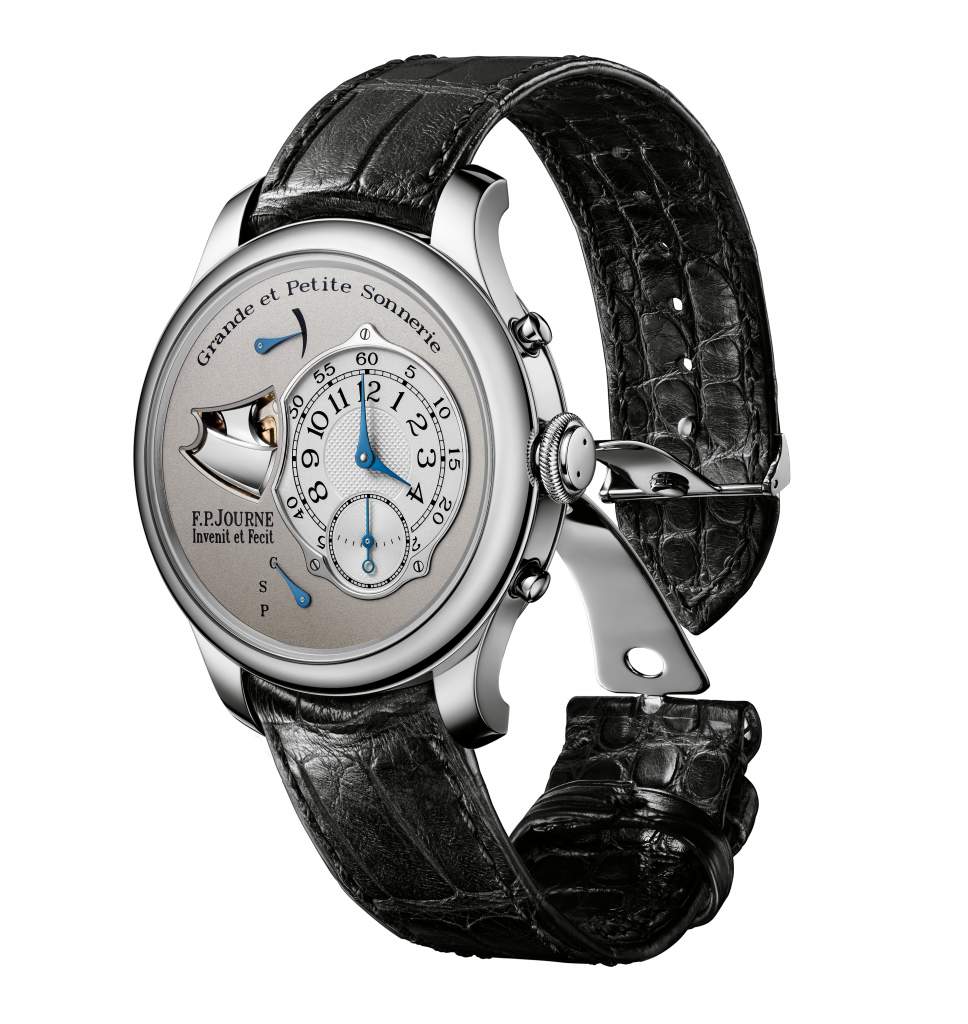 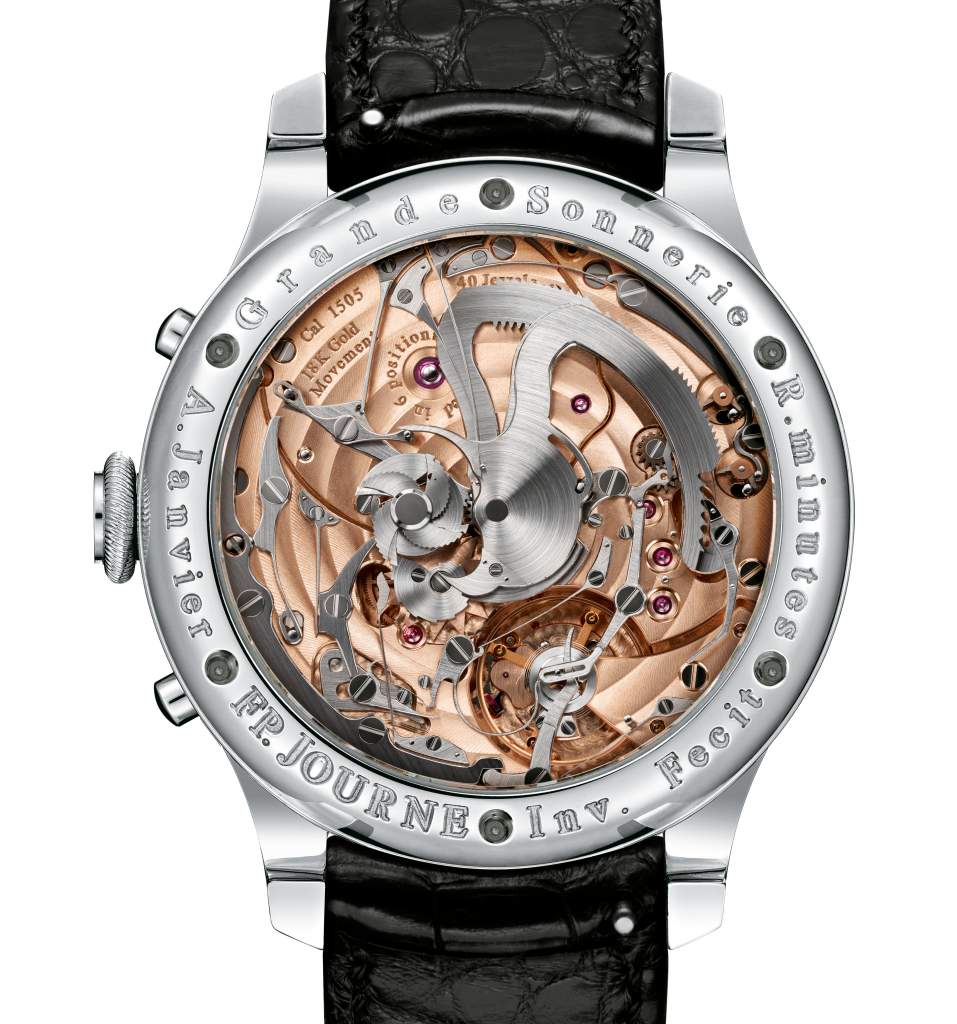 The Grande Sonnerie watch with Minute Repeater is the most complex of horological creations, one that demands the very utmost in both technical and artistic virtuosity for the watchmaker in charge of its assembly. The greatest difficulty in its construction was to ensure full grand strike function, using the limited energy reserves of a wristwatch, without adversely affecting the chime’s sonority or reliability.

In this watch, a single mainspring provides enough energy for 24 hours in grande Sonenrie mode (912 hammer strikes in 24 hours) without using the minute repeater. The chiming alone uses 60% of the mainspring’s energy. In silent mode, without the chime, the time indication functions for five days.

The construction of this movement was thus a continual quest to maximize mechanical efficiency, in order to achieve 912 hammer strikes every 24 hours. The result is gentle mechanisms and a low-tension movement that requires extremely precise adjustment to insure unfailing chiming 35,040 times a year.

In the past, it has always been risky to use a Grande Sonnerie watch. The slightest error - for example, adjusting the time while the watch is chiming - could seriously damage the watch’s delicate mechanisms.

Therefore, the first entry in F.P.Journe’s specification book for this watch was: “make the watch so that an eight year old child can manipulate it safely without damaging it. I must say this was the most difficult challenge of my career!

To meet this challenge I had to construct a movement based on new mechanical principles. Thus, according to the brand’s motto, ten patents * testify to the “Invenit” of this work of watchmaking art, while the “Fecit” took six years of research and development”.

For the first time in history, a grand strike clock watch provides a true comfort and a total security, ensuring that the mechanism cannot be damaged by incorrect manipulation. Marvel of technicity, the F.P.Journe Sonnerie Souveraine provides patented security mechanisms that forbid the watch to strike while the crown is pulled out and forbid to pull the crown while the striking mechanism is engaged.

The Sonnerie Souveraine strikes the hours and quarters in passing; and in small striking mode, it rings only the hours at the hour, and then only the quarters. Furthermore, it also strikes on demand, like the Répétition Souveraine, the hours, quarters and minutes.

Revealed through the sapphire crystal case-back, the 408 components have been meticulously and patiently crafted by a truly skilled watchmaker to form a reliable and resolutely innovative mechanism. The extra flat gongs of just three-tenths of a millimetre thick are mounted around the movement to increase space and produce a louder and clearer sound than classic gongs.

The sense of hearing has allowed the development of a new sensation and a novel relation to time and allows the owner to engage in a constant dialogue with his watch. The Sonnerie Souveraine bears no reference number but is engraved with the name of its owner, giving it a true identity and making it a truly exceptional object.

For its striking watches, F.P.Journe has exceptionally abandoned precious metals for its cases, Gold and Platinum for a noble cause, to ensure the best possible striking tones that make optimal use of the crystalline structure of Steel.

The Sonnerie Souveraine was also named Watch of the Year at the Grand Prize of Japan in 2006.