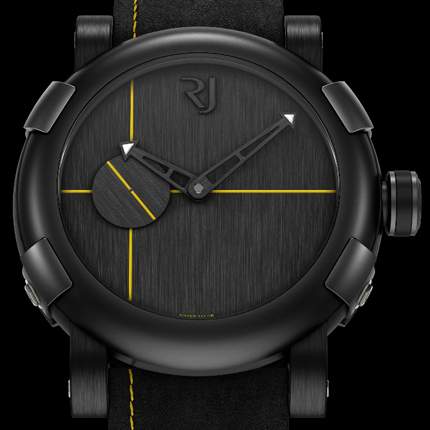 For its touch-down in London, RJ-Romain Jerome has chosen as its landing base the legendary Selfridges & Co. department store, an exceptional address that opened over a century ago and has become a truly global ambassador of luxury. A temple of luxury now inhabited by the “Titanic DNA”, “Moon DNA” and Eyjafjalljökull DNA” collections, along with an exclusive timepiece specially introduced by RJ-Romain Jerome to celebrate the occasion.

Loyal to its explosive creative streak, this resolutely 3rd millennium watchmaking has designed a watch featuring fine yellow stripes. The pure, understated design and the flawless black shade reflect the colour signature of the great British retail institution. Its case-back is engraved with a map of London, and a splash of yellow highlights the exact location of Selfridges where this nine-piece limited-edition model will be available. This new watchmaking shock wave will doubtless sweep through Oxford Street and have the whole of London surfing a tide of exceptional, original and rare timepieces.

RJ-Romain Jerome
Air, earth, water and fire : RJ-Romain Jerome offers the raw energy of imagination to those who are capable of nurturing their most secret dreams. Born at the dawn of the 3rd millennium, RJ-Romain Jerome draws upon the strength of the elements to create the watches of the new horological era. The magic of the moon, the power of lava, and underwater mysteries are the poetic driving forces behind this creative explosion.

Whether through recovering steel from the Titanic or from the Apollo 11 space shuttle, of mingling silver with moon dust or sculpting volcano lava, RJ-Romain Jerome asserts its iconoclastic spirit and electrifies tradition by celebrating contemporary legends. Its approach is characterised by a blend of raw character and elaborate refinement, drawing as much on the roar of an erupting volcano as on the writings of H.G. Wells.

A taste for adventure, an all-conquering spirit and visionary avant-gardism mergewith the realm of the imagination in the “Titanic DNA”, “Moon DNA” and “Eyjafjallajökull DNA” collections. These three worlds exalt contemporary horizons through a resolutely masculine and contemporary touch. From the ocean depths to the immensity of space, from incandescent lava to age-old minerals, the RJ-Romain Jerome collections are far more than just astonishing watches : they define a new era in watchmaking.

Offering every man a chance to explore a dreamlike new dimension, they also embody the values of their times : a sense of distinctiveness, a need for speed, and a spectacular yet discreetly sophisticated aura of virility.
Air, earth, water and fire : it is now up to everyone to find his own element, and to give substance to his dream and to his own vision of Time.