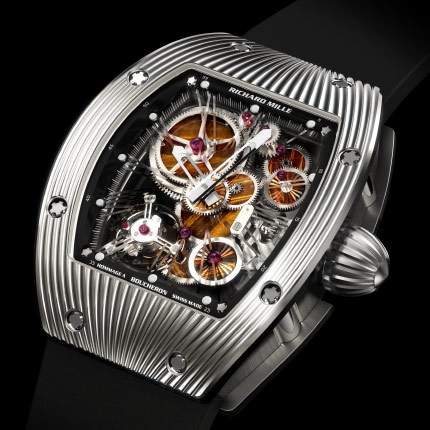 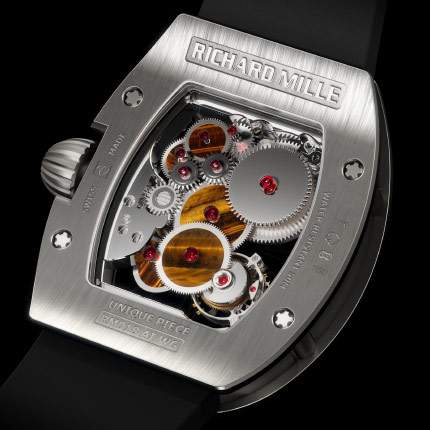 In celebration of Boucheron's founding in 1858, the most famous jeweller of the Place Vendome and Richard Mille have joined forces to create a unique timepiece, the RM018 tourbillon wristwatch, representing a synthesis of Boucheron's bejewelled savoir faire and the innovation of a 21st century watch brand.

Richard Mille has a reputation of being a pioneer, having single-handedly reinvented watchmaking with the use of new materials and technologies for a new form of 21st century horology. This time, inspired by the 150th anniversary of Boucheron's exceptional creativity, he has collaborated with Jean-Christophe Bédos, the President of Boucheron. What started out as a friendly collaboration between both men, quickly developed into something much more tangible. They quickly saw that they were both motivated by the same values and principles in the creation and realization of exceptional objects, and that together, something never before achieved could be done.

THE RM 018 “HOMMAGE A BOUCHERON”, A CONCENTRATION OF THE DNA OF BOTH BRANDS

The RM 018 “Hommage à Boucheron” represents the extraordinary union between jewellery and watchmaking, combining the best of jewellery design with Richard Mille's revolutionary know-how. This entire project was a new challenge for both companies; as such a feat had never before been achieved. However, they succeeded, and the result is a world premiere: a timepiece creation with the wheels of the movement made from semi-precious and precious stones. An astounding technological achievement that in reality simply exudes exquisite elegance and refinement to the eye of the beholder.

The production of this unique tourbillon wristwatch will be shared between both companies with the case and the movement by Richard Mille and the semi-precious and precious stones chosen by and embellished with Boucheron's great expertise. Furthermore, each watch will be unique, with different combinations of stones in each. Due to the time-consuming nature of the production, which requires much hand finishing and embellishment, the series will be limited to 30 pieces in 18ct white gold