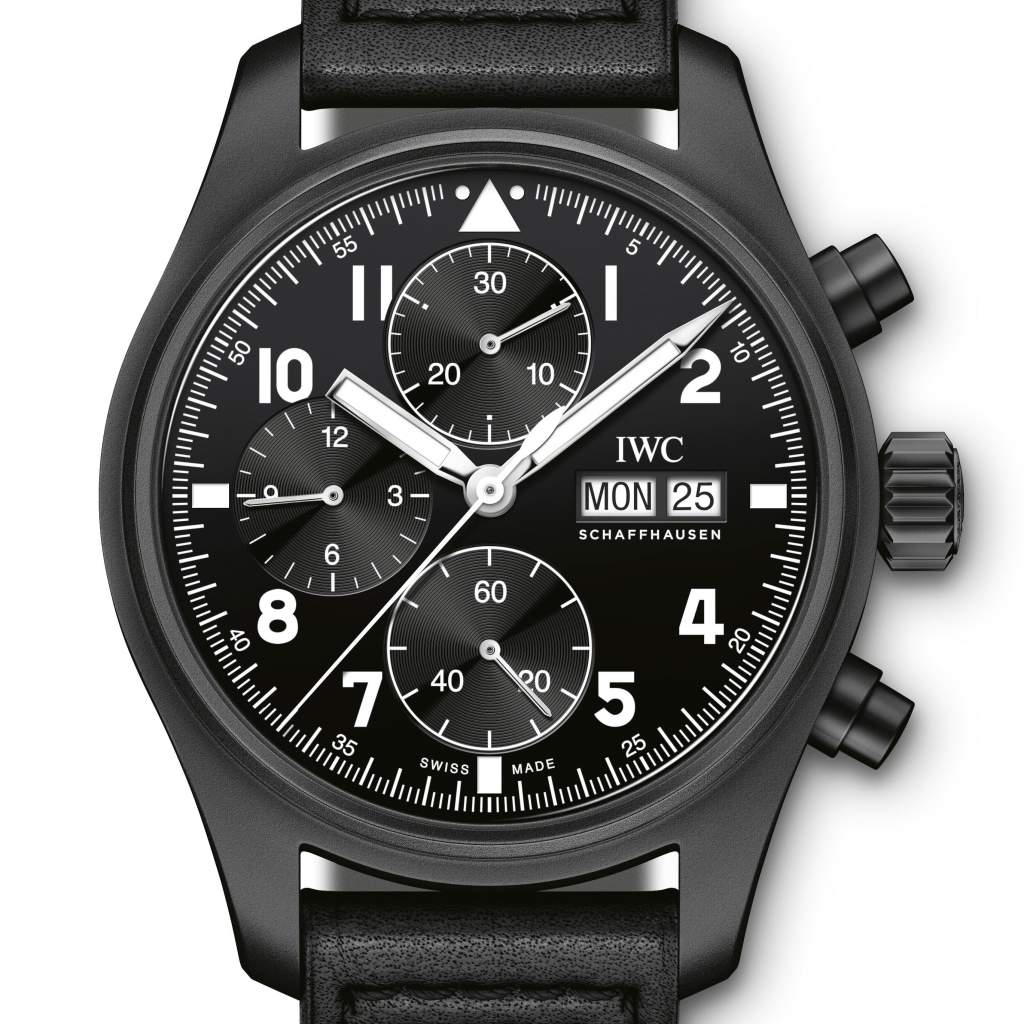 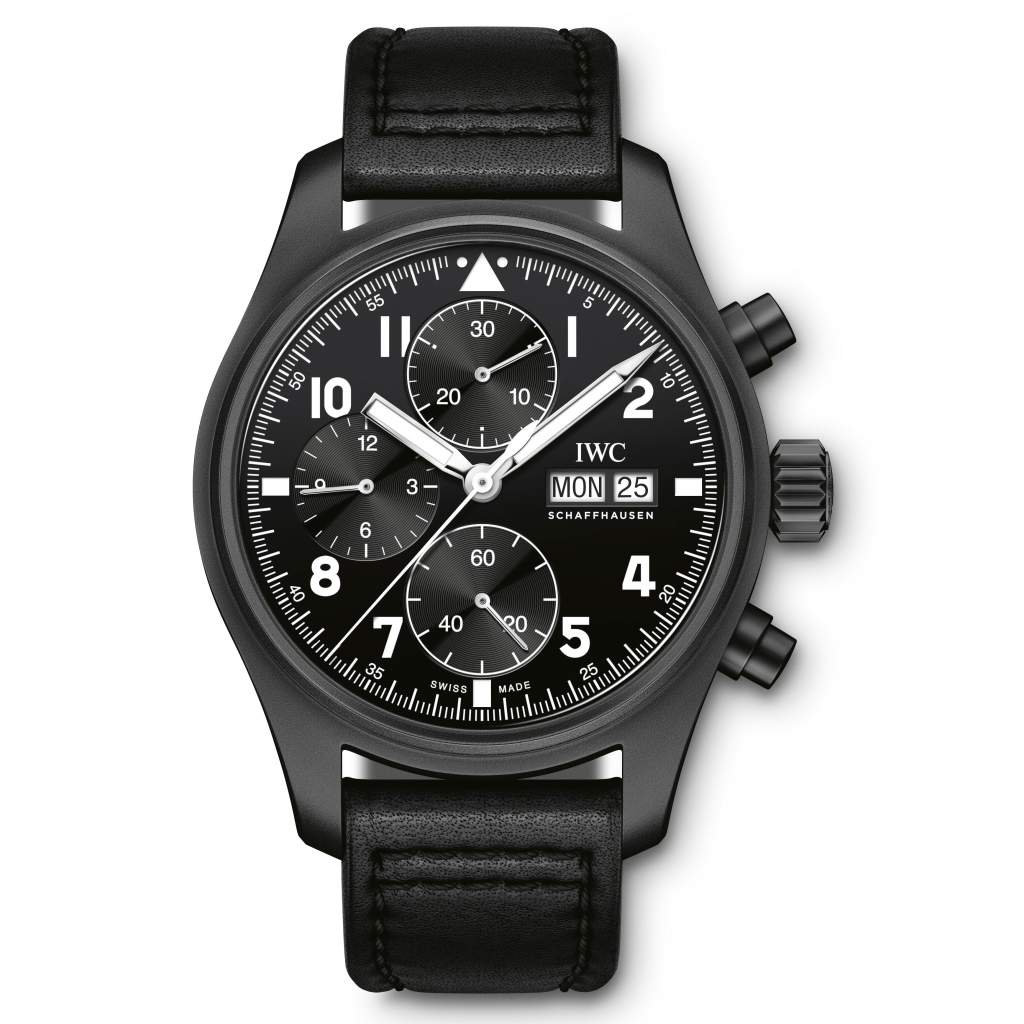 In 1994, IWC presented the ref. 3705, the first pilot's watch with a case made of black zirconium oxide ceramic. At that time, IWC was one of the first watch manufacturers to experiment with this scratch-resistant case material, which is incredibly challenging to manufacture. Despite its high level of innovation and purist design, the model was no success. It was not until about a quarter of a century later that the "Black Flieger", of which only about 1000 pieces were made, was re-discovered by watch enthusiasts. Today, thanks to its subtle neo-vintage charm, ref. 3705 is one of the most sought-after collector's items from IWC's recent history. Now, the brand is honouring this unique timepiece with the Pilot's Watch Chronograph Edition "Tribute to 3705". Just like the original relied on a pioneering material, the Tribute Edition likewise uses a material innovation from Schaffhausen: the case, chronograph pushers and pin buckle are made of Ceratanium®. This new material is as light and robust as titanium, but at the same time similarly hard and scratch-resistant as ceramic. The dial is modelled on the original reference 3750. Stop times of up to 12 hours are displayed on two totalizers at 9 and 12 o'clock, with the small second at 6 o'clock. The in-house 69380 calibre ensures precise timekeeping. This sporty timepiece is fitted with a black calfskin strap. The special edition is limited to 1000 pieces and is available exclusively on IWC.com.

Movements from the 69000-calibre family are used in all IWC watches that require a precise, robust and high-performance chronograph movement. The chronograph is a classic column-wheel design and takes the energy it needs from a bidirectional pawl-winding system similar to the Pellaton mechanism. The dial contains three subdials: one for the hour counter at “9 o’clock”, one for the minute counter at “12 o’clock” and one for the small seconds at “6 o’clock”. Movements in this calibre family have a frequency of 4 hertz (28,800 beats per hour) and a power reserve of 46 hours.

IWC unveiled the first Special Pilot’s Watch in 1936. The Big Pilot’s Watch followed 4 years later and was the ultimate deck watch. In 1948, the Schaffhausen watch manufacturer supplied the Mark 11 to British Royal Air Force, where it remained in service for almost 40 years. The cockpit-instrument look of these three iconic watches inspires the design of classic pilot’s watches to this day. The IWC Pilot’s Watch family is divided up into five distinct lines. The classic Pilot’s Watches are instantly recognizable thanks to their black-and-white dials and the triangular index at “12 o’clock”. The shimmering metallic dial on each Spitfire watch is reminiscent of the fuselage of their legendary namesake. Watches in the TOP GUN collection feature a classic dial and a black ceramic case with push-buttons and a crown made from titanium, while the TOP GUN Miramar line sports authentic military-style design cues. The “Antoine de Saint Exupéry” and “Le Petit Prince” special editions pay tribute to the life and work of the French author and pilot.

In 1868, the American watchmaker and entrepreneur Florentine Ariosto Jones travelled from Boston to Switzerland and founded the “International Watch Company” in Schaffhausen. His visionary dream was to combine advanced American manufacturing methods with the craftsmanship of Swiss watchmakers to make the best pocket watches of his time. In doing so, he not only laid the foundation to IWC’s unique engineering approach but also established the centralized production of mechanical watches in Switzerland.

Over its 150 year history, IWC Schaffhausen has developed a reputation for creating functional complications, especially chronographs and calendars, which are ingenious, robust and easy for customers to use. A pioneer in the use of titanium and ceramics, IWC today specializes in highly engineered technical watch cases manufactured from advanced materials, such as titanium-aluminide and Ceratanium®. Preferring the principle of “form follows function” over decoration, the Swiss watch manufacturer’s timeless creations embody their owners’ dream and ambitions as the journey through life.