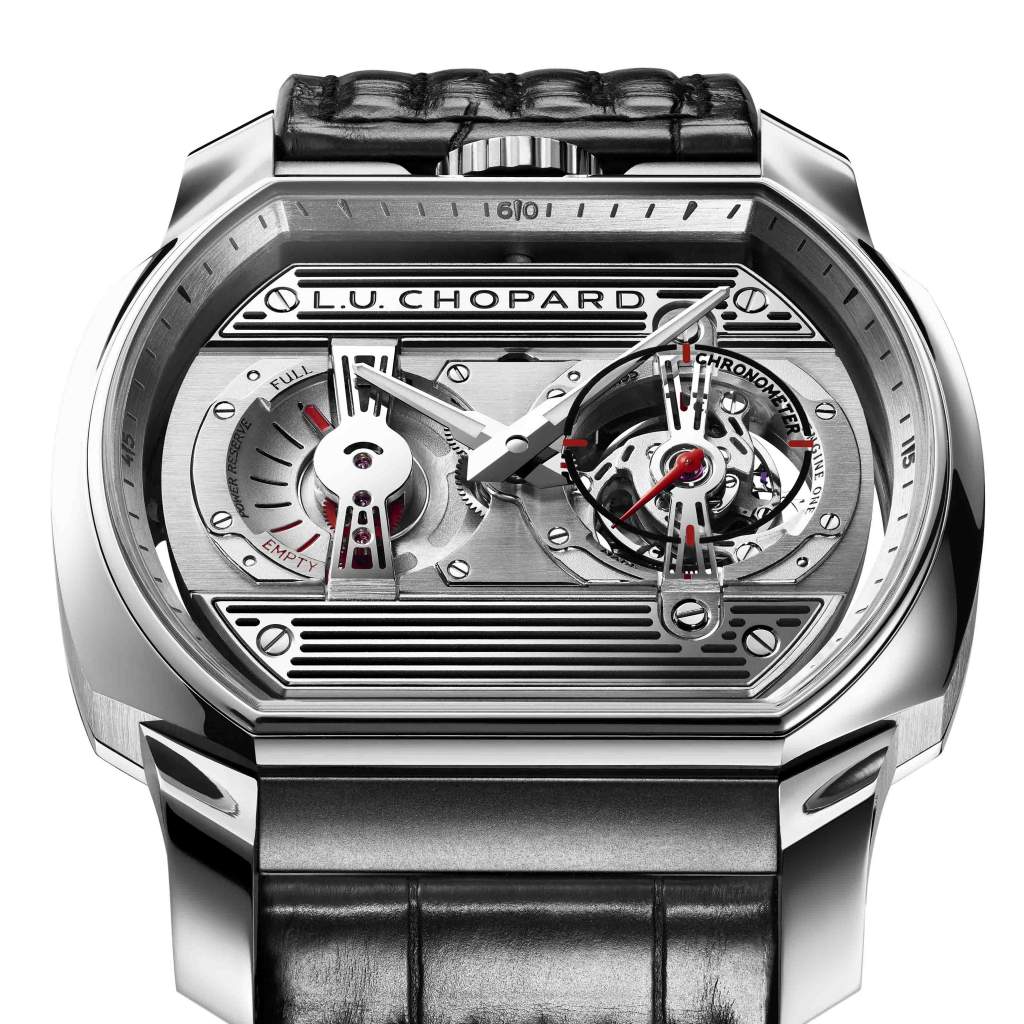 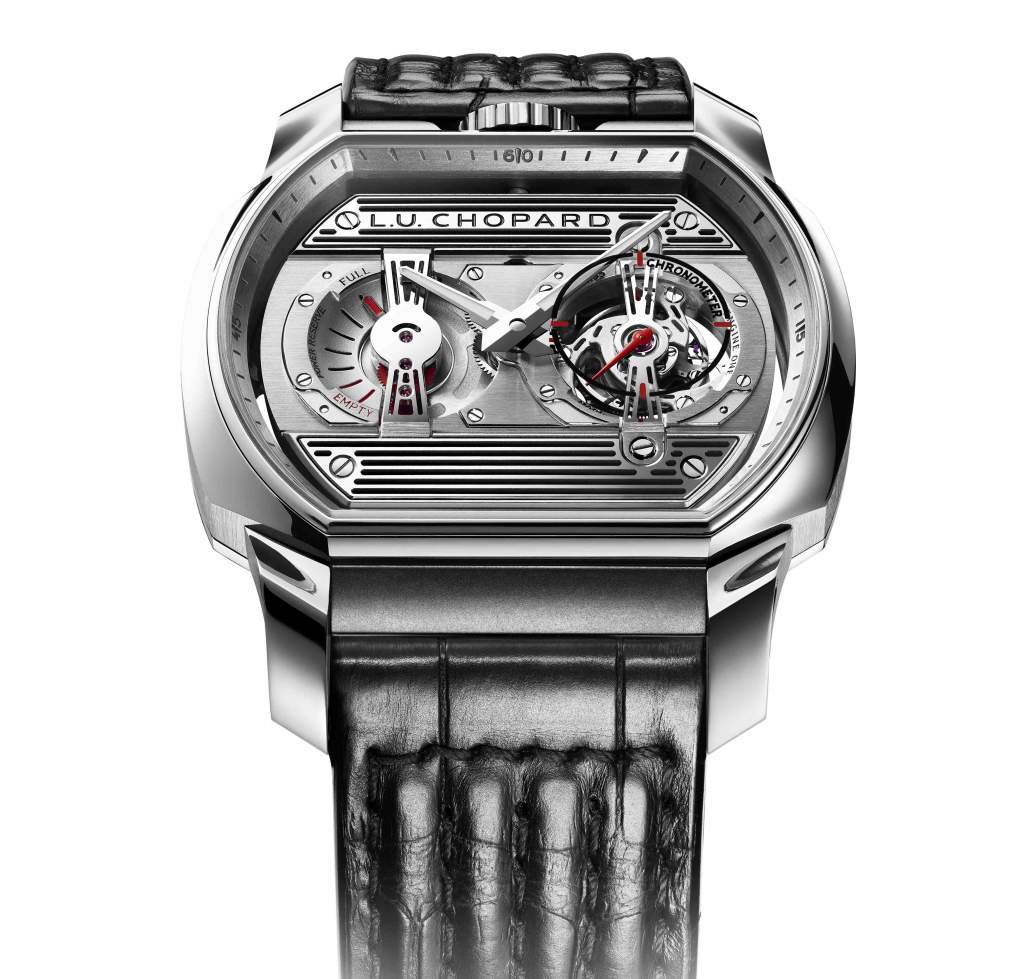 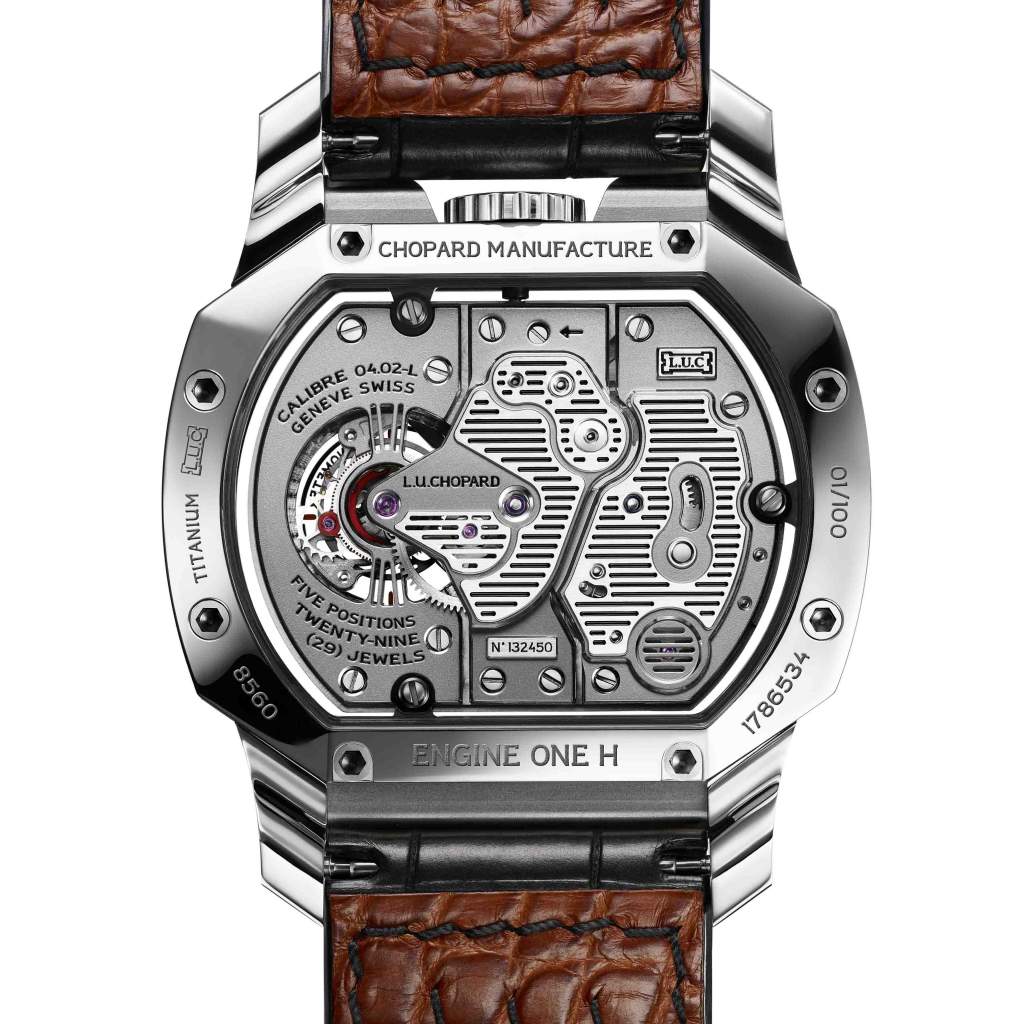 Endowed with an inherently technical, distinguished and sporting nature, the L.U.C Engine One is an aesthetic hybrid combining authentic automobile mechanics with Fine Watchmaking. The finishes on its Chopard Manufacture tourbillon movement evoke those typically appearing on engines, while its horizontal layout reflects the design of racing-car cockpits. Through aesthetics, functionality and performance, Chopard once again affirms its long-established and intimate relationship with the field of competitive motor sports.

The parallels between automobiles and watchmaking feature a depth and variety that Chopard has been consistently exploring for many years. Now the L.U.C Engine One H offers fresh proof of the watchmaker’s passionate attachment to the competitive racing world and its values based on a blend of performance and pleasure. This watch is equipped, not with a V10 twin-turbo engine mounted in an aluminium chassis, but with a hand-wound calibre with a tourbillon regulator “propelling” a titanium case. While the function of these two objects is very different, their inherent spirit and the pleasure they procure are very similar.

The very best of two mechanical expressions
Designed and built by Chopard Manufacture in Fleurier, the movement of this timepiece bears the reference number L.U.C 04.02-L. The openings in its movement are a nod to the openworked design of a racing-car air intake. Engine-block cylinder heads inspired the grooves engraved on the dial-side bridges. For functional reasons, the latter are in fact an integral part of the main plate of the movement. The latter is visible from both sides of the “machine” through two flat sapphire crystal watch glasses. The interplay of polished and satin-brushed surfaces, the cut-off curves and the concave surfaces, combine to express a particularly sophisticated approach to design in both formal and ergonomic terms.

L.U.C. Engine One H provides an ideally legible display of its various items of information. While the hours and minutes are shown by central hands, the power reserve is read off on the left, much like a fuel gauge. The small seconds are fitted on the tourbillon and appear on the right, like a speedometer. Both the inner and outer sides of the alligator strap with its five rows of overstitching echo the aesthetic of automobile upholstery from the 1960s and 1970s, demonstrating the care that Chopard devotes to each and every finishing detail.

Automobile read-off
The structure of the L.U.C Engine One H can be interpreted like that of a car. It is equipped with an engine (mechanical rather than of the internal combustion type), fitted with a single lengthways-positioned cylinder (the tourbillon). It is topped by a grooved cylinder head (its bridges) in nickel silver and steel instead of die-cast aluminium. Its engine speed is stable at around 480 revs per minute (meaning 28,800 vibrations per hour or 4 Hz). To optimise its performance, it spins on its own axis (the tourbillon). It is equipped with a transmission system (the going train). Its fuel tank (the barrel) guarantees 60 hours of running autonomy (power reserve). The cap of this fuel tank (the crown) has been enlarged to ensure an easier grip when refuelling in the pits (winding and setting to time). Its performance and precision have been verified on an independent test bench (the Swiss Official Chronometer Testing Institute, or COSC). The engine (L.U.C Calibre 04.02-L) is mounted on shock-absorbers (chassis mounting rubbers) that help protect it from impacts. The titanium from which its bodywork (the case) is made makes it light, scratch-resistant and eminently biocompatible.
Pivoting the movement by 90 degrees enables the L.U.C Engine One H to change face without changing direction. Stemming from a highly demanding aesthetic and mechanical approach, it is in fact far more than just an automotive metaphor, since it once again symbolises Chopard’s deeply embedded roots in the world of motor sports as well as its enduring horological determination.

Chopard’s in-house approach to watch manufacturing
Chopard is a family business with a strongly ingrained philosophy of independence. The steps involved in making L.U.C watches are all performed in-house at the group’s Meyrin and Fleurier production sites. Movement development, finished product design, gold casting, stamping and cases machining, movement parts and bracelets, as well as traditional hand-crafted finishes, surface treatments, polishing, assembly, adjustments and quality controls: such is the comprehensive range of watch production operations fully mastered by Chopard and involved in the making of each watch in the L.U.C collection.