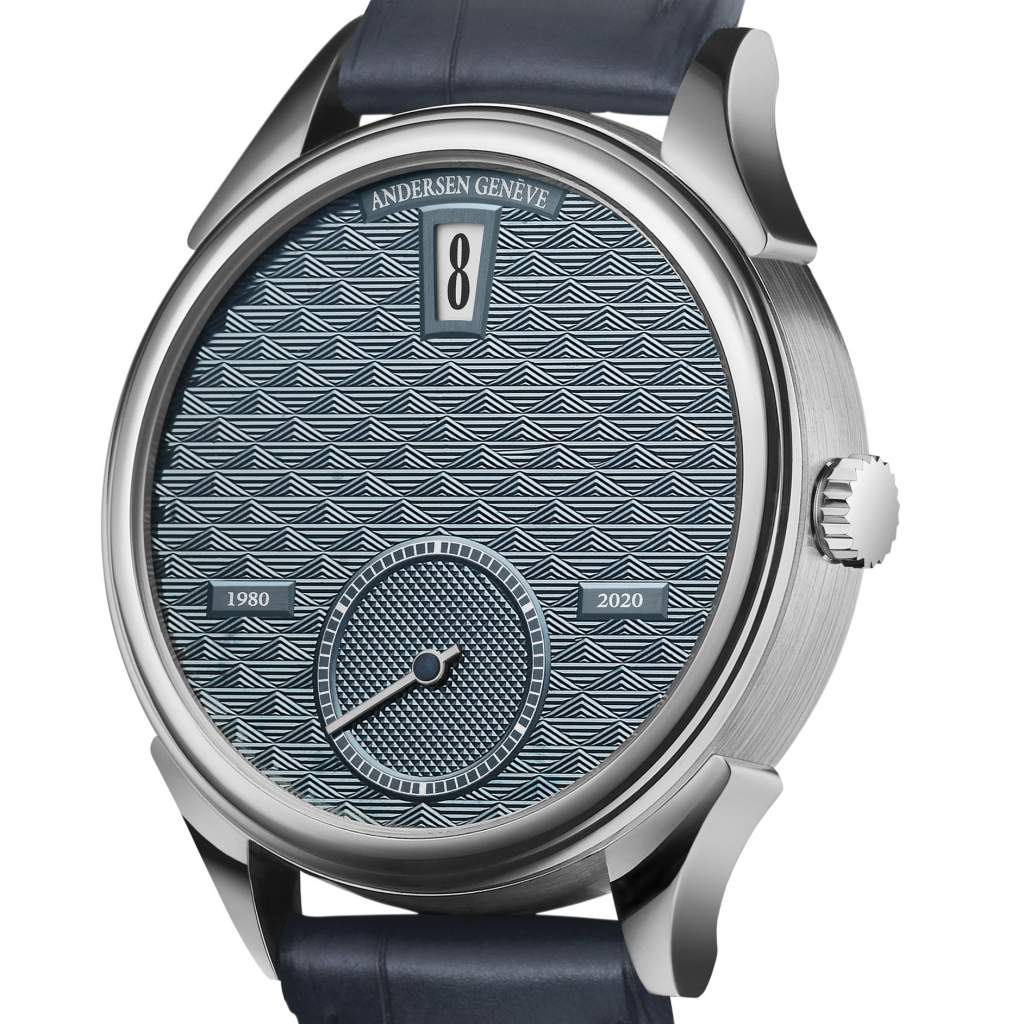 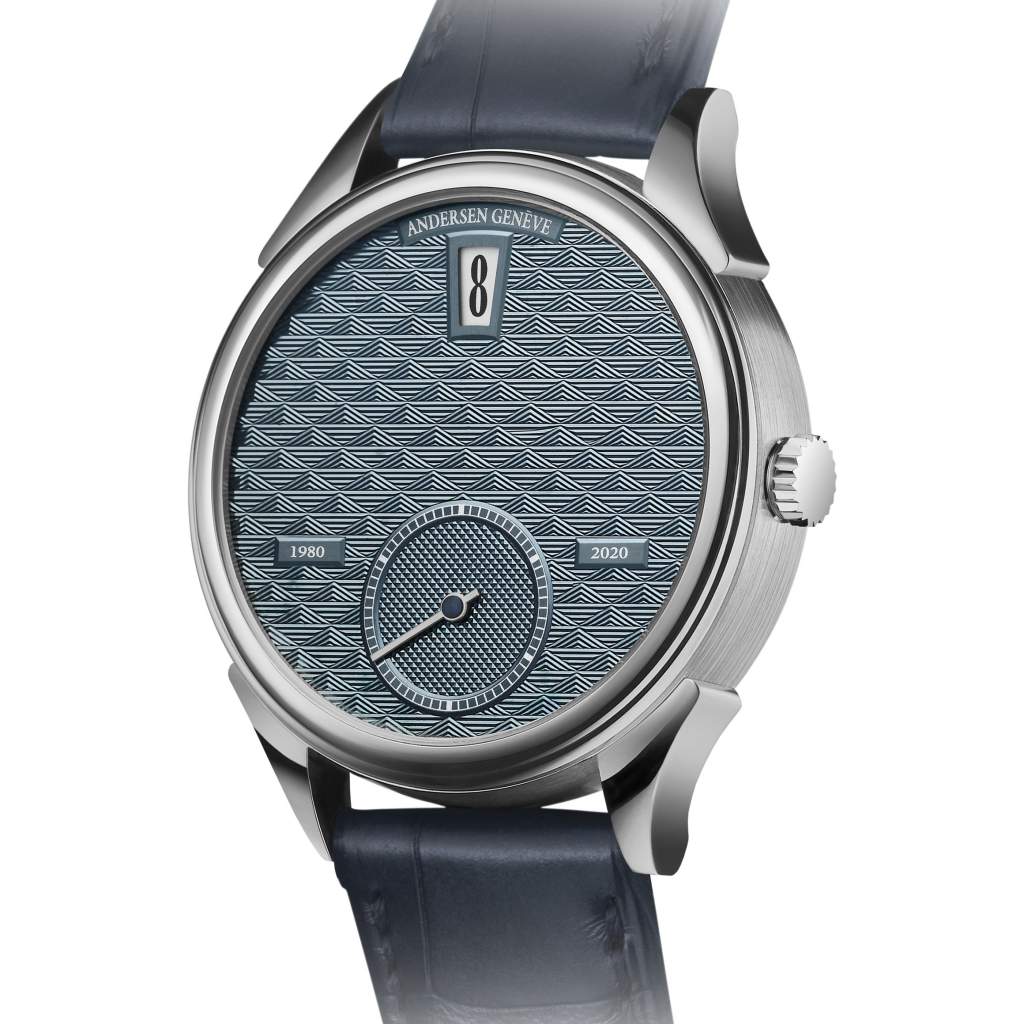 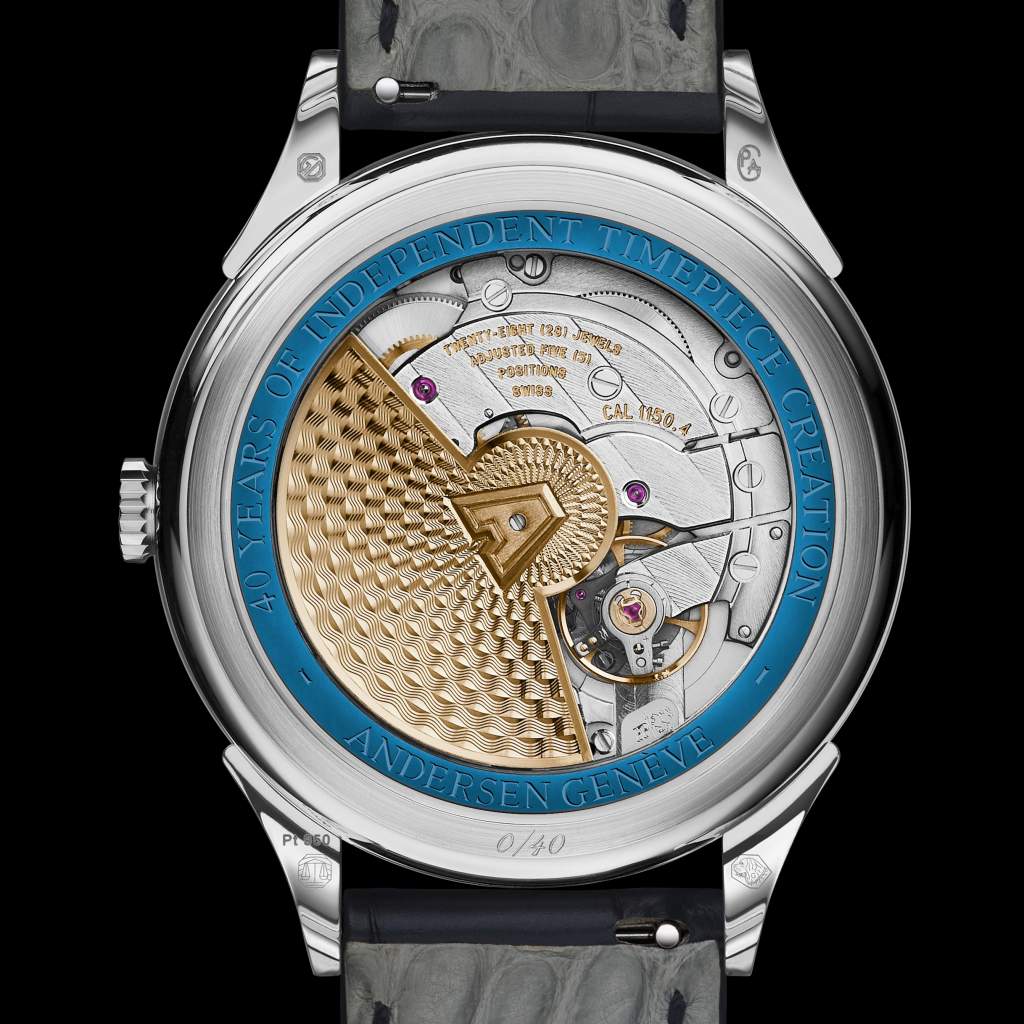 Founded by Svend Andersen in 1980, ANDERSEN Genève has been making exclusive watches for collectors for four decades. With a new platinum edition of the astonishing ‘Jumping Hours’ model unveiled in June 2020, the brand completes its quartet of special timepieces made to mark 40 years at the pinnacle of watchmaking.

In 2020, independent watchmaker ANDERSEN Genève marked its 40th anniversary by presenting three phenomenal hand-crafted watches: the Tempus Terrae Worldtime with a bezel of baguette diamonds; the Automaton JOKER, a collaboration with master watchmaker Konstantin Chaykin, in white gold; and the Jumping Hours 40th Anniversary watch, a masterful new expression of a classical complication.

These are now joined by the final watch in the quartet: a platinum version of the Jumping Hours. Together, these watches form a landmark set, exemplifying founder Svend Andersen’s approach to watchmaking at its most inventive and artisanal.

The Jumping Hours, in which the hour is shown digitally while minutes are indicated by a hand, is one of watchmaking’s most elegant traditional complications. ANDERSEN Genève has now taken this genre to new levels of artistry and beauty.

Like all ANDERSEN Genève creations, this is a watch in which each element – dial, case, movement – is treated with equal focus and delicate technique. The new model in platinum 950 sees the bar raised even further, since platinum is a far more challenging and arduous material to work with. It requires different techniques of machining and craftsmanship to achieve the most flawless finish. In platinum, for instance, the elegant lugs must be machined separately and painstakingly welded to the case barrel.

With this watch, ANDERSEN Genève presents an exceptionally refined interpretation of the classic Jumping Hours complication. The hour is indicated through a window at 12 o’clock, while the minutes tick by discretely on a beautiful sub-dial at 6 o’clock. Either side of the sub-dial sit two plaques inscribed with “1980” and “2020”, marking the company’s first 40 years.

The rest of the dial forms a canvas on which to exhibit the most outstanding craftsmanship, with a mesmerising “magic losange” hand guilloché pattern engraved into a dial surface made from a signature ANDERSEN Genève material: 21ct BlueGold. To achieve this incredibly rare material that is used almost uniquely in watchmaking by ANDERSEN Genève, 24ct gold mixed with iron elements is heated in an oven, turning it a radiant shade of blue. In this completely artisanal process, no two dials emerge from the oven with quite the same tonality, making every dial unique.

Into this is inscribed hand guilloché work of a kind that is exceptionally difficult to execute, requiring three different machines to build up the intricately detailed pattern. The result is a dial with a truly unique appearance, which changes constantly as the light catches it from different angles.

The reverse of the watch is no less artful: a sapphire glass case-back reveals the beautiful anglage and hand-finishing of the movement, and the 18ct yellow gold rotor magnificently decorated with a “grain d’orge” hand guilloché pattern. In the centre of the rotor one can recognize the “A” ANDERSEN Genève logo that has been hand-engraved by a master engraver. Surrounding this, a ring of 21ct BlueGold is also hand-engraved with the text “40 years of independent timepiece creation”.

The watch is powered by the Frédéric Piguet 11.50 movement, one of the finest haute horlogerie automatic calibres in Swiss watchmaking. Its ultra-slim dimensions make it a perfect base to carry the jumping hours mechanism developed and manufactured in-house by ANDERSEN Genève, while its two-barrel architecture ensures a long power reserve of 60 hours.

Forming the fourth and final watch in ANDERSEN Genève’s anniversary collection, this is truly a milestone watch for a milestone moment. It is made in a Limited Edition of 40 timepieces.

Since 1980, ANDERSEN Genève has been creating high-end timepieces for collectors around the world. Its work combines incredible ingenuity with beautiful craftsmanship, much of it produced on a bespoke basis for clients wanting something personalised or completely unique.

Svend Andersen first achieved fame in the watch world in 1969 with his outstanding “Bottle Clock” invention – a horological take on the “ship in a bottle” concept. He went on to develop his craft in the Grand Complications Atelier at Patek Philippe, where he worked for nine years. In 1980, he began taking private commissions from discerning collectors, soon opening his own workshop in Geneva – ANDERSEN Genève was born.

Ever since, ANDERSEN Genève has been developing watches of significant complexity and beauty. In particular, it has become famous for its series of magnificent Worldtime editions, which trace their DNA back to the complication’s inventor, Louis Cottier, via Svend Andersen’s time working at Patek Philippe; its “Eros” series of complex horological automata, which animate discrete, beautifully-realised erotic scenes; and the ingenious “Montre A Tact” watches that replace a dial and hands with a pair of time reading windows in the top and side of the watch, meaning the owner need not turn his wrist to read the time. Another famous achievement is the “Secular Perpetual Calendar”, which solves a quirk of the Gregorian Calendar that requires normal perpetual calendars to be manually corrected in centennial years; the ANDERSEN Genève complication requires no adjustment up to and beyond 2400.

Svend Andersen is also the co-founder of the Académie Horlogère des Créateurs Indépendents (AHCI), a body inaugurated in 1985, bringing together many of the world’s most esteemed independent watchmakers, to represent them and collectively promote their work.

With a small team working in the heart of Geneva, only a few dozen timepieces leave the Atelier every year – in fact, fewer than 1,500 timepieces have been manufactured since 1980. In all that time, the Atelier has remained at the same location next to the Rhône river.

Truly the watchmaker’s watchmaker, Svend Andersen and ANDERSEN Genève have been a driving force at the heart of independent watchmaking for four decades. Its aim remains the same: to support a deep passion that’s shared between its watchmakers and knowledgeable collectors alike.