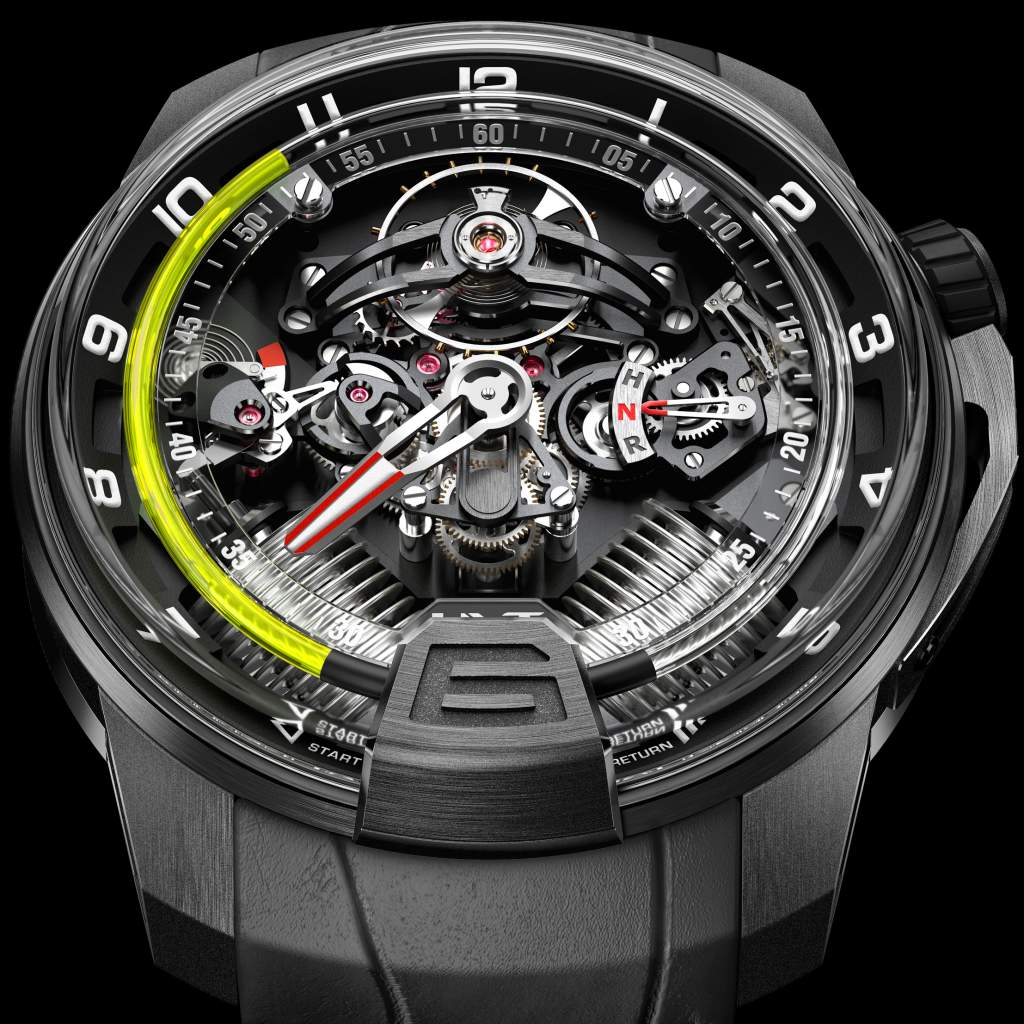 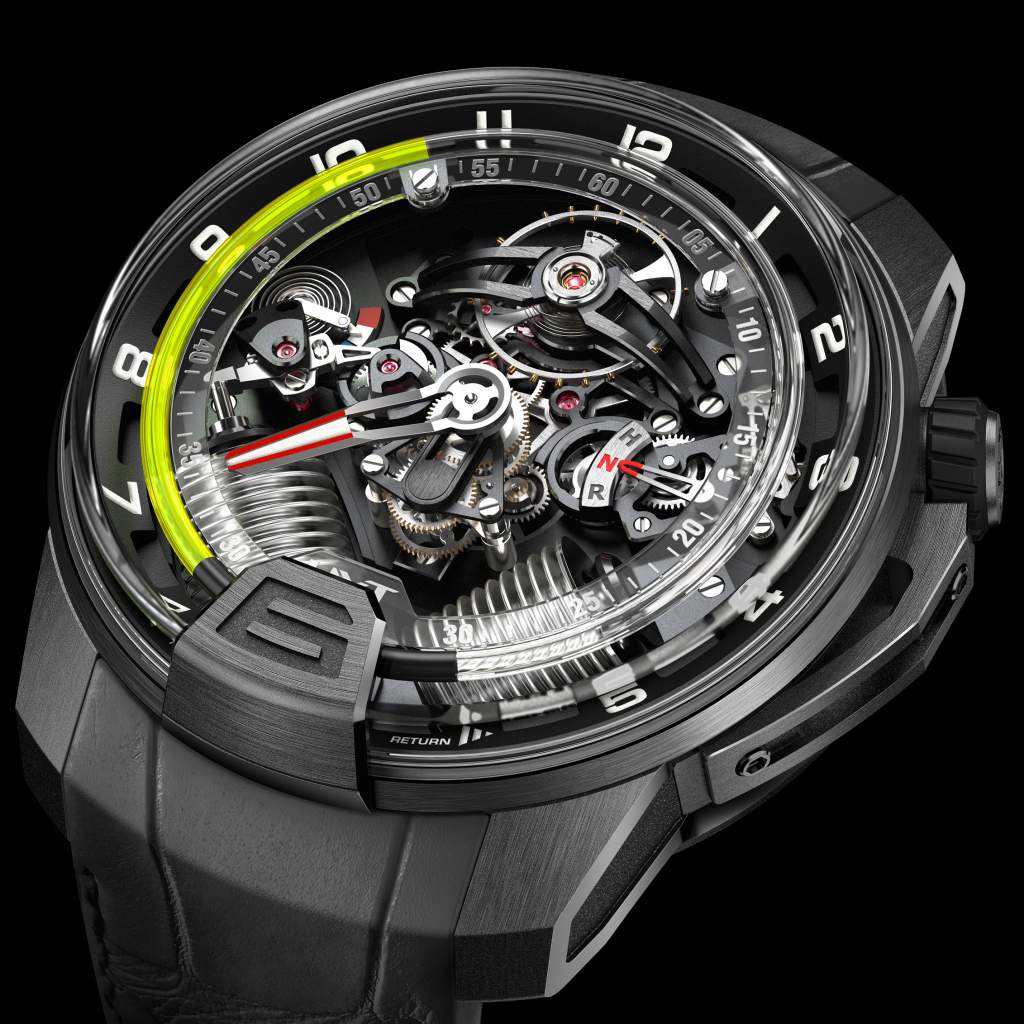 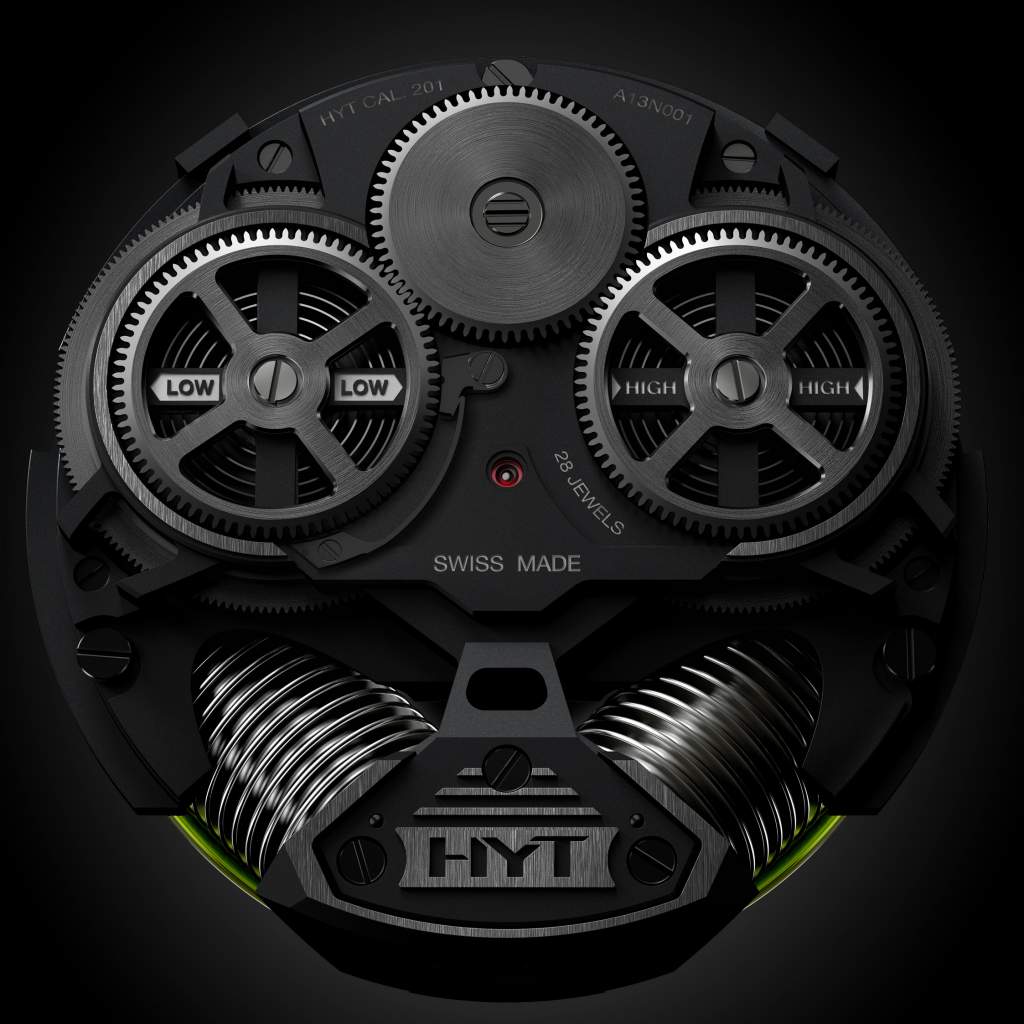 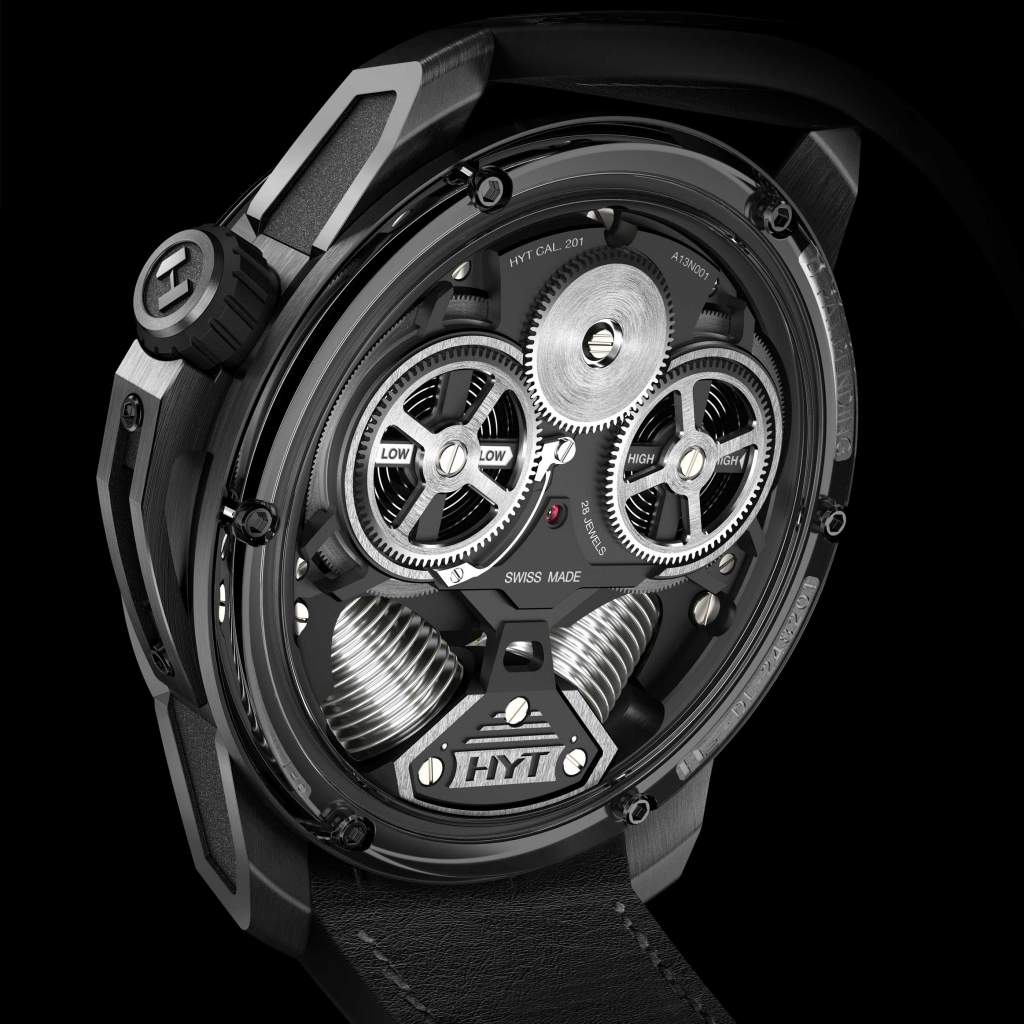 EARNING ITS PLACE IN THE SPHERE OF HIGH-END WATCHMAKING BY TURNING UTOPIA INTO REALITY, HYT IS CONTINUING ITS ALL-ENCOMPASSING QUEST FOR HYBRIDISATION WITH THE H2. THE PERFECT ALLIANCE BETWEEN HIGH-END WATCHMAKING AND FLUID MECHANICS, THE H2 WAS BORN OF A VISION SHARED BY THE HYDRO MECHANICAL HOROLOGISTS AND THE APRP TEAM (AUDEMARS PIGUET RENAUD ET PAPI) OVERSEEN BY GIULIO PAPI.

Bolstered by the enthusiastic reception to its launch in 2012, HYT is continuing its immersion in the world of Haute Horlogerie and pushing the limits of hydro mechanics yet further with the H2. The first sketches for this exclusive model date back to the summer of 2012. The guiding principle behind this new concept? To further integrate fluidics into mechanical watchmaking.

MULTIDIMENSIONAL ARCHITECTURE
With the H2, the entire architecture of the hybrid movement has been redesigned. Deconstructed, it coexists, integrates, encloses the bellows, and the system of feelers, cams and pistons. In a Hydro Mechanical watch, these are not just aesthetic elements, but rather key components.

HYBRIDISATION PUSHED TO ITS PEAK
Firstly, by the position of the bellows, positioned at 6 o'clock in "V" and rising, which clearly evokes the most outstanding achievements of automotive and aeronautical engineering. This optimises the integration of the interface which connects the watch mechanisms with the fluidic system.

Mirroring the pair of bellows, the balance spring presides at midday on its black bridge, the dome marking the rhythm of life in this unique world.

At 3 o'clock is a "H-N-R" crown position indicator, which brings to mind the gearstick of a racing car, is counterbalanced by the presence of another hand, which is also original and exclusive to HYT, a temperature indicator. Once the watch is being worn, this function enables the user to accurately find out when the fluid has reached the optimum temperature range.

In the centre, a minute hand, designed in stages to perfectly fit the structure of the fluidic system, jumps after 30 minutes to avoid the bellows.

This piece boasts a black DLC titanium case with a diameter of 48.8 mm and a thickness of 17.9 mm, a domed sapphire crystal. The fluidic display on the H2 is intuitive, the architecture transparent and the fully visible movement accentuates the three-dimensional depth which is characteristic of the brand. In terms of performance, the double barrel, visible through the back of the watch, offers an 8-day power reserve and the force required to orchestrate this mechanical feat.

Cleverly using the visibility of the barrel spring, the power reserve is displayed in a truly innovative fashion via the openworked barrels.

HYDRO MECHANICAL HOROLOGY, IN BRIEF:
The driving force behind the idea to introduce hydro mechanical technology in 2012 is simple: Two flexible reservoirs with a capillary attached at each end. In one, an aqueous liquid containing fluorescein. In the other, a viscous transparent liquid. Keeping them apart is the repulsion force of the molecules in each fluid.

At 6 o'clock, the two bellows, made from an incredibly strong and supple electro-deposited alloy, are moved by a piston. When the first is compressed, the other is extended, and vice versa, driving the movement of the fluids in the capillary. The meniscus, which marks the separation between the fluids in the tube, displays the time. When it reaches 6 pm, the fluorescent liquid returns to the original position using a retrograde movement.
More than a watch, HYT is an incredibly exciting piece with a design ensuring its powerful, bold and assertive nature. Inspired and rebellious, the design imposes its own codes, underlining the extraordinary character and creativity this piece offers.