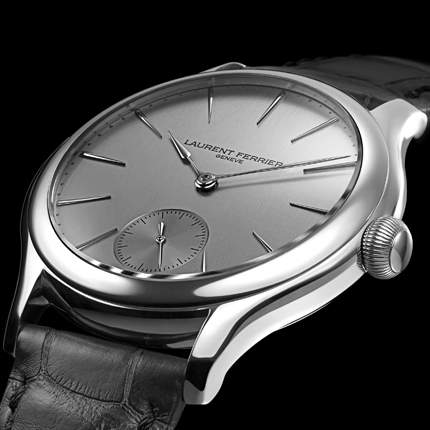 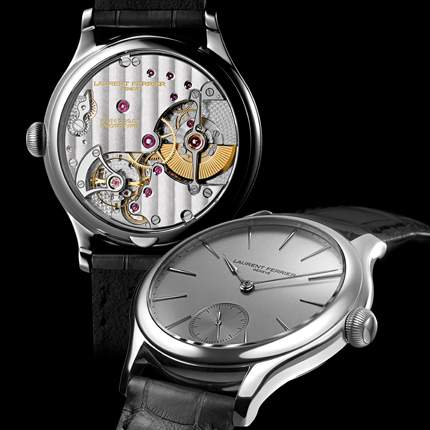 His concern to distinguish himself by offering genuine horological innovations to devotees of fine mechanisms led Laurent Ferrier to reflect on an original watchmaking structure. A keen movement construction enthusiast, he develops in-house made movements featuring a range of atypical and visually gratifying technical attributes. The Galet Micro-rotor Entre-Ponts cultivates this distinction by featuring three exclusive characteristics:

• a micro-rotor pawl-fitted automatic winding system fixed between the main plate and the micro-rotor bridge;
• a silicon escapement with double direct impulse on the balance;
• a silent block shock protection system for the microrotor.

A global approach
The harmonious construction of this new Calibre FBN 229.01 stems from the global approach envisaged for each of the movement parts, from development through to realization. The technical specifications are extremely rigorous, since Laurent Ferrier refuses any compromises in this domain.

The automatic winding system was invented in the late 18th century and takes advantage of the watch wearer's arm movements to wind the barrel spring and thus store up the energy required to run the mechanism. The device has been constantly used and enhanced ever since.

The current trend towards reducing the thickness of cases calls for even slimmer movements, which implies finding technical solutions that are thinner but just as efficient. Hence the value of examining the architecture of a smaller-sized micro-rotor type automatic-winding system. The challenge facing Laurent Ferrier was to define a functional balance between the limited thickness of an automatic movement and a high degree of efficiency for winding the barrel. Achieving this implied finding a system ensuring perfect winding in order to compensate for the lower inertia of a small oscillating weight. In fact a micro-rotor needs as twice as many rotations (300 vs. 150) needed for one complete turn of the ratchet wheel.

Thanks to the efficiency of our escapement we can reduce by one third – to approximately 200 rotations
– the number of rotations needed. A gain for the owner of the watch.

The double direct impulse on the balance
This proved to be a fascinating issue to which Laurent Ferrier and his son Christian decided to devote their full attention. Supported by Michel Navas and Enrico Barbasini of the Fabrique du Temps, they fitted an exclusive double direct-impulse escapement in silicon directly on the balance – inspired by the father of modern horology, Abraham-Louis Breguet. Thanks to the excellent efficiency of this escapement, we are able to reduce the moment of couple (=torque) required to wind the mainspring and hence optimizes the movement winding.

An efficient winding system inspired by tradition
The excessively noisy ball-bearing system has been replaced by a more traditional horological mechanism with pawls. The micro-rotor is fitted with a unidirectional-winding gold oscillating weight. The latter is fixed directly between the mainplate and its upper bridge in order to ensure maximum stability compared with a conventional micro-rotor. Furthermore the shock protection system is very innovative by using the principle of the silent bloc: the micro rotor is mounted on its axis between two O-rings.

In the same thought of optimizing the winding power the barrel is mounted on rubies.

Sublimated finishing
The curve of the solid white or red gold case reflects the pure, restrained House style. It echoes the smooth pebble shape of the large understated and sophisticated models of 19th century horological history, and particularly that of pocket-watches. It is fitted with a ball-shaped winding-crown to facilitate handling. The case-back is snap-fastened and can be removed by the watchmaker thanks to the olivette. Its water resistance is guaranteed to a depth of 30 metres.

Inspired by the “school watch” made by Laurent Ferrier and completed in 1968 at the Geneva Watchmaking School, the silver-toned or slate-grey dial adorned with a vertical satin-brushed finish is punctuated by a small seconds subdial at 6 o'clock. It is swept over by “assegai-shaped” hour and minute hands, and a baton-type seconds hand. It ensures perfect readability thanks to the graphical arrangement of the applied “teardrop” hour-markers and the beaded minute circle.

The exceptional finishing of the movement is crafted in the finest watchmaking traditions. In addition to a Côtes de Genève pattern on the bridges and the circular graining on the mainplate, the flanks are handdrawn, the wheel spokes are bevelled, the screw heads are polished, and the interior angles of the balancecock are hand crafted with a burin. The micro-rotor bridge is hand polished. The sapphire crystal caseback provides a glimpse of the finesse of this work and reveals this innovative architecture finished in harmony with horological traditions.

The Galet Micro-rotor Entre-Ponts is equipped with a black or brown alcantara-lined alligator leather strap. A pin buckle or a double-blade folding clasp in white or red gold matching the colour of the case sets a refined finishing touch.

A promising future dawns
A subtle blend of past memories and contemporary techniques, this self-winding calibre with off-centred micro-rotor stems from an exclusive conception, developed and tested with the greatest care. It provides exceptional timekeeping qualities and demonstrates the value of an aesthetically appealing and mechanically accomplished mechanism. Collectors will appreciate its design serving to enhance the aesthetic of its main organs.

With this new construction combined with cutting-edge materials, LAURENT FERRIER is thus displaying to its best advantage this type of winding that maximises energy efficiency. Destined to become the core movement of the young Maison, the FBN Calibre 229.01 has been designed to adapt to various forthcoming complications.