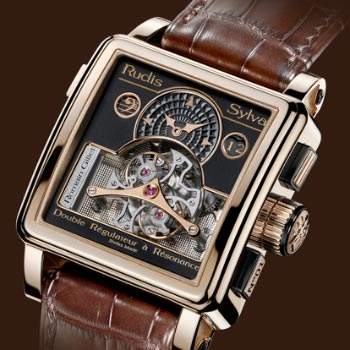 The resonant double regulator
A regulating system like this has never existed before. Romain Gillet was inspired by tests conducted on tourbillon watches during the 1850s to create a resonant double regulator mounted in a cage comprising a double ball bearing developed specifically for Rudis Sylva. This mechanism delivers an exceptional level of precision, not only by virtue of its ability to transmit the energy distributed by the oscillating action of the two balances, but also thanks to the spring system which links the tourbillon units together.

Featuring highly innovative technology, this patented design delivers a much higher level of regulatory precision. The tourbillons, adorned with titanium screws and red jewels, perform their function within the clean lines of nonetheless stylish decor. Extremely complex ball bearings had to be developed to ensure perfect rotational harmony with the balances.

Each component was created specifically for this exceptional Rudis Sylva timepiece, and finished by a traditional watchmaker, right down to its hand-made chamfers. This manual winding timepiece has a power reserve of more than 50 hours.

The musical box-type chime
Rudis Sylva aimed to mark its debut into the world of prestige watchmaking with a musical box-type chiming timepiece. The runners on the disc are caressed by a comb made of flame-treated tempered steel which transmits a “Rauracien” melody to the case, named after the “Rauracie”, or ancient name for the Jura massif, which means “harsh country”, in reference to the region's winters.

The chime is wound by sliding a bolt hidden away at the bottom of the case. Wound to the maximum, the melody sounds on each of the next four hourly strikes.

Each owner will have the option of personalising the melody of his/her timepiece.

The Grande date/hours and minutes/actuation of the chime
The chime is actuated by pressure on the push piece integrated in the glass section of the middle part. It is in its “chiming” position when the bass clef appears in the aperture and in its “stop” position when the “silence” symbol appears.

The grande date indicator takes the form of an innovative design comprising several patented systems. This feature was developed within an extremely confined space and called for great creativity on the part of the engineers.

The hours and minutes are displayed on a recessed dial featuring manually applied guilloché decoration, and the gold hands are shaped like fir trees. The hands extend through the barrel arbor. This design is not new, but it did prove an indispensable way of freeing up space in the double regulator cage.