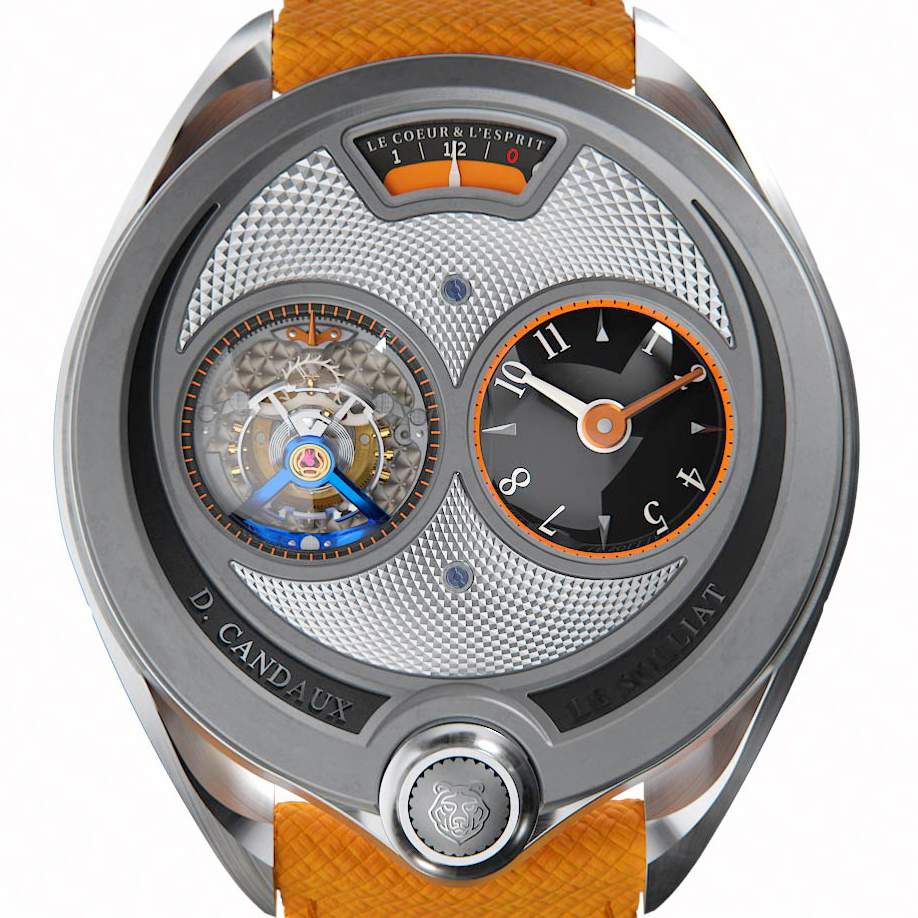 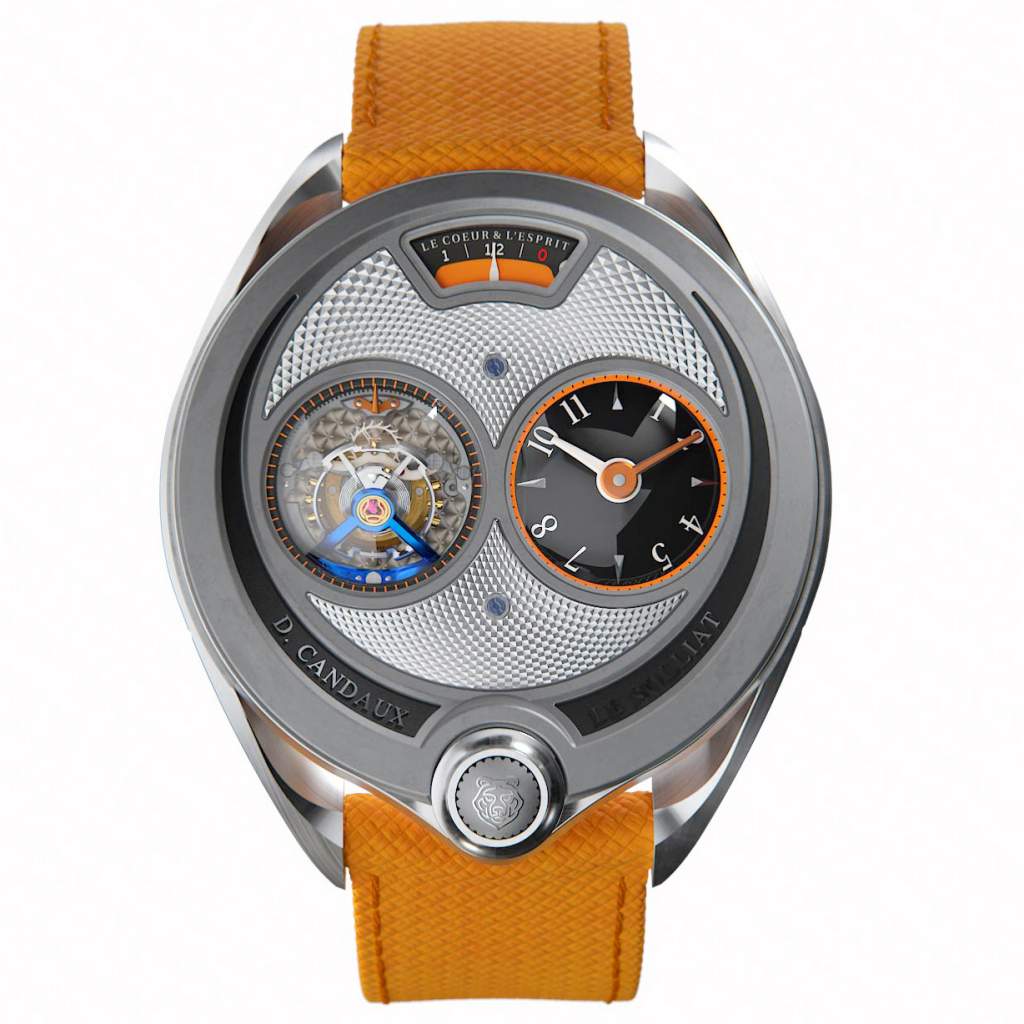 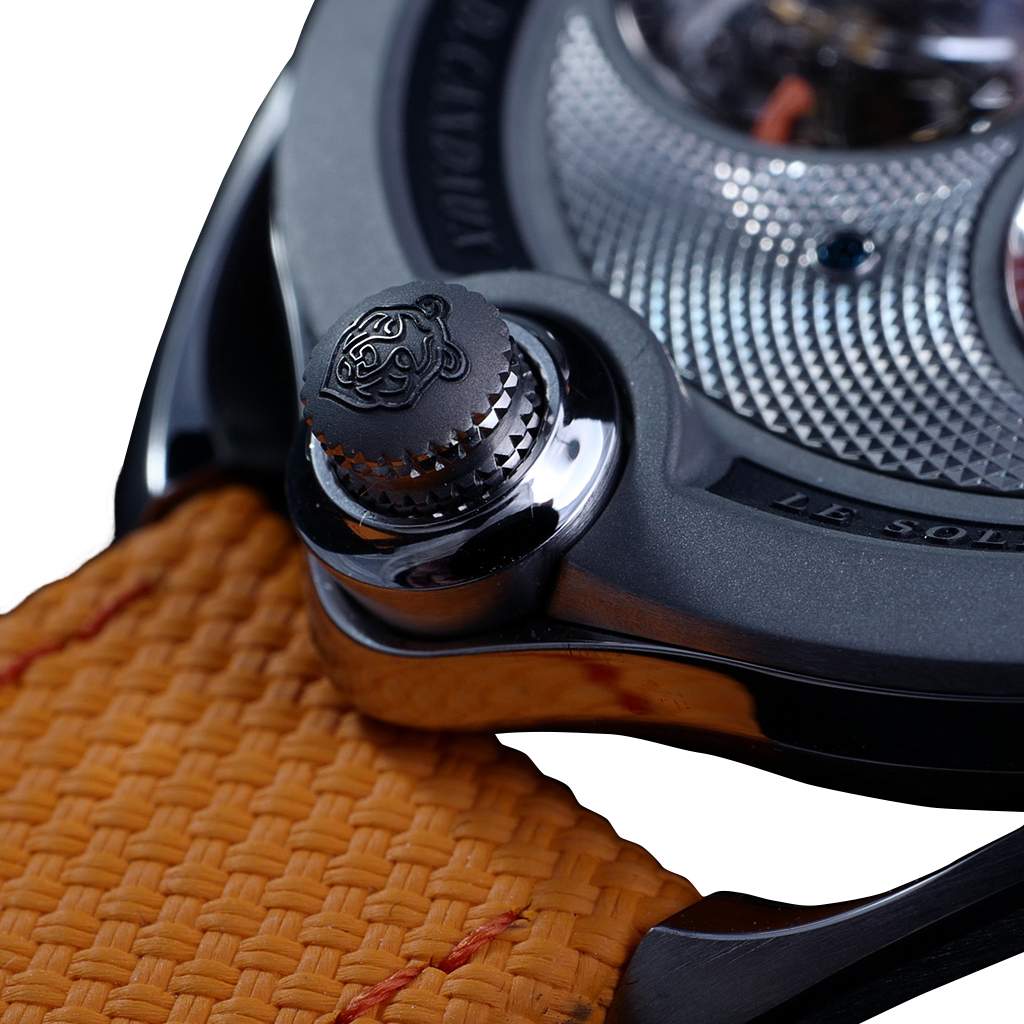 D. Candaux: DC6 Solstice Titanium  The reinterpretation of a classic

The new DC 6 Solstice Titanium “cal.1740” handmade by the independent watchmaker David Candaux for Baselworld 2019, represents his contemporary reinterpretation of the classic half-hunter pocket watch form as it was used in the stressful, active environments found on land and the seven seas.

David’s specific vision were the forms found on antique captain’s watches, as well as many seafaring instruments such as compasses, wherein the viewing area, partially encased in metal, only allowed portholes for viewing the required indications. In this manner, the half hunter form provided excellent protection of the glass, hands and movement from shocks under extreme conditions.

This tourbillon creation by David Candaux taps into the historical period when horology was still perceived as a major science and watchmaking fell under the realm of mathematics, philosophy, and astronomy. This was an era when the quest for accurate timekeeping occupied the minds of the greatest inventors of European civilization. The DC 6 Solstice Titanium Half Hunter “1740” pays homage to these precision instruments of the past, timepieces that were in use by the explorers and master mariners of the 18th and 19th centuries. A novelty of the time, these highly accurate timepieces allowed ship’s captains to literally and physically carry the time of their departure harbor with them, and therefore calculate the longitude of their location at sea easily without requiring star-gazing, ephemerides, astronomical tables, and several hours of navigational calculations.

With this history at hand, the DC 6 Solstice Titanium goes a step further, representing a more radical stylistic interpretation and technical advancement in comparison to the classic historical half- hunter concept; simultaneously it represents a more futuristic development to the first models of the present collection.

New visual impulses The first visual aspect one notices is the incredibly finely executed, complex decoration of the front face of the watchcase. It has been given a unique, engine-turned guilloche pattern named Pointe du Risoux that deliberately recalls the patterns of the local Risoux fir tree forest that surrounds the Candaux atelier. Created as a contemporary approach to antique guilloche traditions, this pattern was not only meant to be visually inspirational; it was also deliberately designed to invite the user to sensually engage with its complex surface, adding another level of interaction between the timepiece and its owner. With a subtle and completely contemporary touch, this guilloche patterned front cover has been created in natural titanium. This precious metal is one of David’s favorites due to its subtle glow and introverted elegance.

Asymmetrical display Set into this magnificently adorned front cover of guilloche finished 18K white gold, the timekeeping indications and open view of the tourbillon have been placed under two tiny spherical, convex shaped portholes of specially machined sapphire glass, with the power reserve situated under a small, separate arch of sapphire glass at the top edge of the case front.

The hours and minutes are read on a spherical, convex micro-dial under the rightmost sapphire dome with its two curving hands of hand finished and blued steel that precisely follow the curving dial’s exact form. The fully visible, twice-inclined flying tourbillon is situated under the sapphire dome on the left, providing running seconds via a blued index placed on the edge of the tourbillon cage. The mesmerizing beauty of the fully visible, patented and tilted tourbillon echoes the display of the three-dimensional hours and minutes window. It perfectly and harmoniously balances the symmetry of the front, directly evoking the half hunter timepieces and marine compasses of previous centuries. In addition to these details, the entire front of the DC 6 Solstice Titanium Half Hunter “1740” has been gently and almost imperceptibly inclined; standing slightly higher in the case at the 12 o’clock position and lower towards 6 o’clock. This unusually positioned bezel comfortably enhances reading the time, thus providing an optimized field of view for the user. Like the original 1740 model, the DC 6 Solstice Titanium Half Hunter is also fitted at 6 o’clock with the unique retractable crown, for which David Candaux has received two patents.

The result provides a definitive improvement on the standard, horizontally orientated tourbillon construction found in wristwatches today. The original tourbillon design, as used in pocket watches, was conceived for dealing with the forces of gravity from mainly vertical positions in waistcoat pockets. The situation today is totally different: as used in wristwatches, the tourbillon must adjust to the angles and movements of our contemporary lifestyle and daily life, as experienced on the human wrist and all of its tilted or angular positions - while sitting, reading, walking, running, and/or having arms on desk when behind the computer.

David Candaux’s bi-plan flying tourbillon was created in such a way as to ensure a continual change in position of the cage and of the regulating organ in relation to these types of wrist positions people normally use in daily life, thus optimizing its capacity to compensate the influence of gravity that could affect chronometric results. Following the best practices possible, the curve of the spiral has been given a Breguet overcoil ending in a Phillips terminal curve, thus optimizing the balance spring’s poise and functionality, with a resultant lower friction on the balance staff in every vertical position. The spiral extremity of the spring is maintained by a stud specially developed for this timepiece in order to guarantee reliable, long-term fixation. Details like these ensure the optimal long-term functioning of the movement and guarantee the quality of chronometric results.

Movement and case in Grade-5 Titanium With a view towards long-term perfection and durability, this metal is one of David’s favorites due to its superlative, high strength/hardness ratio, and its immutable characteristics combined with lightness. The extreme tensile strength of titanium makes all the traditional milling process as well as hand finishing operations for the case and movement parts such as polishing, satin-finishing, brushing and “anglage” much more time consuming, costly, and difficult to achieve. Furthermore, the milling operations to create these parts must be executed using special multi-axis machines fitted with fire extinguishers, since the titanium debris created during the cutting process can become flammable.

Balance The aerodynamically designed balance wheel in beryllium copper (CuBe2), is fitted with variable inertia adjustment thanks to four 18K gold screws and a load screw also in beryllium copper, which can be adjusted by the watchmaker during assembly and timing control. The modification of the balance wheel’s inertia in this manner, allows the watchmaker to speed up or slow down the balance wheel’s beat, and thus regulate the timepiece’s accurate running, as well as fixate its ideal parameters for longterm stability. The use of variable inertia adjustment for the balance eliminates the need for a moveable index to adjust the balance spring, which can, under certain conditions, alter its position after the watch receives a shock or impact.

Inclined Caliber Construction  The DC 6 Solstice Titanium 1740 caliber has been entirely designed in house by David Candaux, a rare case in contemporary Swiss watchmaking. This innovative movement, protected by several patents, answers mechanically to the philosophy behind the 1740 collection with its asymmetrical approach to aesthetics and the art of chronometry. The technical imperatives joined to the secret retractable crown, mean that the entire gear train and bridges have been inclined at 3 degrees in relation to the horizontal in order to accommodate it. Due to the variation of the position of the bridges towards each other, each bridge is inclined at 3 degrees from each other. Thus, the view of the movement’s interior surface is no longer uniformly horizontal but shows a cascading effect. As a result, this innovative constructional feature has the added benefit of accentuating the finishing of all the individual movement parts, amplifying each ray of light reflecting off its surface.

Furthermore, these sparkling reflections also highlight the “Côtes du Solliat”, a new type of decoration elaborated by David Candaux. Due to their notable width, and therefore demanding to create, each single band mastered by skillful hands gives the subtle impression of being composed of three separate  bands. All the 23 inner angles and edges of the tourbillon movement are hand finished with traditionally executed “anglage”, a typical trademark of the Vallée du Joux’s traditional watchmaking culture, making the perfect execution of the movement all the more difficult to achieve.

Escapement The escapement has also been fully developed and designed by David Candaux. His respect for history led him to use the old escapement centering from the Vallée de Joux tradition. This type of centering is based on non-equidistant points of axial reference, unlike those developed for contemporary or industrially produced escapements that are mainly based on equidistant points of reference. Such a non-equidistant geometry improves escapement efficiency and imparts a refined, aesthetic and practical shape to the anchor’s pallet jewels. The different entrance and exit degrees of lift imparted by this system also guarantee the flow of optimal impulse energy to the balance wheel. Last but not least, a new, optimized geometry for the escapement wheel teeth also improve the global efficiency of the escapement mechanism.

Wheels and pinions In total, the movement of the DC 6 Solstice Titanium comprises 287 individual components, each of which is finished respecting the most demanding standards of traditional high-end watchmaking. In this way, the wheels comply with the highest quality requirements and are chamfered, beveled and circular-grained on both sides. As for the pinions, they are polished on a wooden grinding wheel and given a groove just behind the pivot. This historical technique ensures that the lubricating oil remains in place.

Engraved technical specifications In order to ensure the long-term continuity of the movement in the centuries to come, all the technical specifications required to restore or service the caliber have been micro-engraved on the flank of the grade-5 titanium baseplate for future generations. The specifications of the regulating organ, its CGS number (height of the blade of the balance-spring), its inertia, the lift angle and the quality indicator can be found engraved in relief on the fixed second wheel.

It is clear that the DC 6 Solstice Titanium represents a uniquely personal vision of contemporary Haute Horlogerie by David Candaux, which combines both patrimony and creativity. The result is a horological state-of-the-art, ultimate model of 21st century mechanical watchmaking. These are timepieces that retain all of the quality and unique character of the traditional watchmaking arts as practiced in the Vallée du Joux by past generations, created in the present, and destined for the future.

The DC6 Solstice Titanium “1740” is available in three colors; Orange, Blue, and Red.  Each color is limited to 8 pieces. All timepieces come on a Velcro Strap.